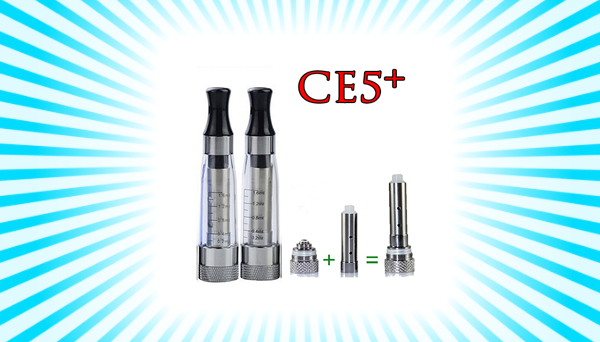 The CE5+ Clearomizer from Crimson Vapor is the typical shape of your CE series tanks, but it looks like the manufactures are finally starting to get it. Rather than an exposed wick, which is very problematic due to rubber seals that cover the coil (rubber presses too tight against the wick and completely covers the coil), this CE5+ has a small metal tube that looks a lot like a cartomizer. The small metal tube has 4 vent holes (2 on each side) to allow just enough e-liquid to pass through and soak the wick that is inside. 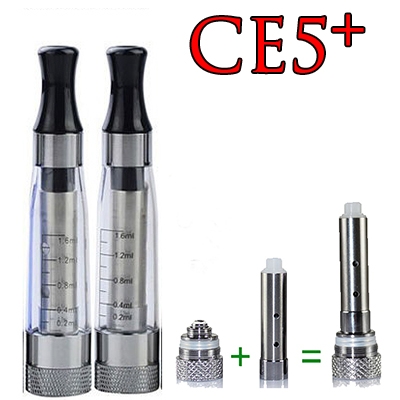 The appearance of the CE5+ is much like all the other CE series tanks, along with its screw on drip tip. On the outside of the tank is markings from 0.2ml to 1.6ml.

The design of the CE5+ is similar to others, except they’ve placed the wicked inside the center tube, rather than being on the outside. Also, the wick leading to the coil is completely exposed on the inside. With that being said, once the e-liquid enters through the vent holes, it can cover the wick and there isn’t anything to stop it from reaching the coil.

I’m not say the CE5+ is too cheaply made, but I’m sure if you drop it on the floor a few times it would likely crack. A few hours before writing this review I dropped my CE5+ on my hard tile floor when changing out the coil (the first coil that came with it was DOA). It didn’t break nor crack, so it seems to be durable enough to take at least one drop.

Although I do like the regular CE5 and CE4’s, it’s hit and miss finding ones that wick properly and not to mention the occasional coil issues. With the CE5+ I’ve received, it’s wicking perfectly and the vent holes play a huge part in this. The vent holes are larger than you would normally see on a Smoktek tank cartomizer (which has been known to have issues because the holes being too small for VG based liquids). I have noticed that if you screw the CE5+ on too tight, it greatly reduces airflow. I believe the bottom notches cut out on the tank for airflow should be just a bit bigger, thus solving the problem. In my experience with the CE5+, it doesn’t handle high voltages well. It seems to perform best between 4v and 4.5v.

It’s pretty simple to replace the coil. Just unscrew the bottom part of the CE5+ and then unscrew the metal tube which holds the coil. Replace that tube with another and you’re good to go. Filling and refilling the CE5+ Clearomizer can be aggravating  On this design, the metal tube that holds the coil is too high inside the tank and not allowing the needed room to pour your e-liquid inside the tank. When filling or refilling your tank, you’ll need to pour slowly and it would be best to use a needle tip cap.

Of course with all these CE series type tanks, they mute the flavor to an extent making the flavor taste a bit mild. With the CE5+ it’s the same way, just not as bad. One thing I’ve learned is if it isn’t an atomizer, expect the flavor to be some-what muted in the least.

The CE5+ puts out good amounts of vapor production when screwed onto the device a bit loose to allow good airflow. This CE5+ coil that I’m using is at 2.5ohm and seems to work well at lower voltages. Even at 4.5v, expect a good amount of vapor.

Overall: I’ve found the CE5+ to perform much better than the other CE4, CE5’s and even T3’s I’ve used in the past. I think with this new design for the vent holes and the wick finally did this CE series justice. The flavor was good, vapor production had me pushing out clouds and I’m overall pleased.

If you’re interested in the CE5+ Clearomizer or any other products like this, you can visit www.CrimsonVapor.com