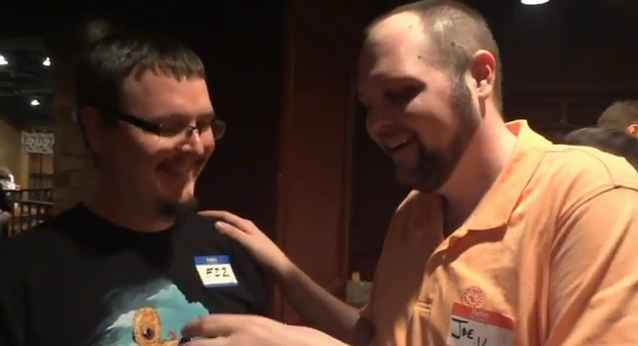 Electronic Cigarettes have now gained a lot of popularity and the public’s view will slowly change from them seeing it as a gimmick or some ghetto rigged device to ‘smoke’, to more of a promising delivery system for nicotine, by means of vapor. It’s sad to say that some of them view these E-Cigarettes in that manner, but I know that’s how they look at it because the first time I heard of them, that was my first impression. I guess that’s why you can’t stress enough of the saying “Don’t judge a book by its cover”.

While at a recent event or known as “The ATL Meet-Up”, I met a very nice and laid back vaper that happened to be sitting at the same table I was at. At this event we were told to put our forum name or alias on our name tags and this vaper I met, his read “Fiz”. One of the coolest guys I had the privileged to meet at this event, but there was something different with him than many of the other vapers I seen. The thing that was different was what he was using to vape. Usually you’ll see a vaper walking around with a lanyard on their neck and sporting an eGo or some type of device in resemblance. “Fiz” was wearing a lanyard, but at the bottom of this lanyard didn’t sit an eGo, instead it held a battery pack with a lamp cord coming from it. Holding the long lamp cord coming out was a bundle of rubber bands and to end of the lamp cord, the hot wire connected to the 510 connector which was housed by a small post of some sort. The ground wire was completely exposed and required him to touch the ground to that metal piece for it to fire. An awkward setup he was rockin’, but it worked. I applaud him for taking a step into the right direction with it being electronic cigarettes, however… the image it gives off to the public can be a slight issue. Let me explain.

We’ll imagine this just as an example for my point: We’re at this event and also hoping for possible smokers to see what’s going on. An interested lady walks up to Fiz wanting information about electronic cigarettes and possibly wants a demonstration of how it all works. On hand Fiz has his setup I mentioned above and the lady sees the live exposed wire. “You simply take this live wire and touch it here to get power”. – Hmm, not so cool. As you know, you’ve heard stories from some of the public thinking a tube mod looks like some sort of bomb. Now think about how much more you’ll feed into these comments if you were walking around with a box hanging from your neck, that has a live wire exposed and hanging.

Now don’t get me wrong ladies and gents, I’m not picking at Fiz, nor am I saying this is the worst thing ever, but I am saying that there needs to be a decent level for how our electronic cigarette setups appear or are presented into the public. Especially at these times we need to make even the mods appear as professional or not ‘rigged’ as possible. It wasn’t so much of his setup being super dangerous, but to the public image, maybe so.

With that being said, this is what took place next…

Please give your thoughts on this subject below in the comments section.