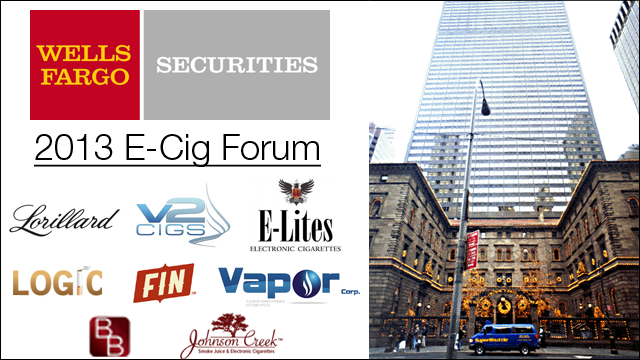 The event includes presentations from some of the most successful electronic cigarette companies & brands as well as a public health and regulatory panel. Participating companies were Ballantyne, E-Lites, Fin, Johnson Creek, Logic ECig, Blu, NJOY, V2 Cigs, Vapor Corp, along with a Public Health Panel and Regulatory Panel.

The event gives companies and individuals a unique opportunity to hear directly from and network with industry leaders and visionaries. The objective was to provide those with access to some of the top experts and executives in the industry as they discuss topics including: the continued evolution of e-cigarettes, consumer behavior/acceptance of this growing category, production, quality control, the changing retail landscape for e-cigarettes, the vast potential of e-cigarettes and what this means for the tobacco category as a whole.

If you are an e-cigarette company, attending this event would have offered an insider look into important issues, as well as a way to network and grow your business. For those of you who weren’t able to attend, our friend Klaus Kneale at Ecig Advanced attended the event and relayed some notes from the presentation.