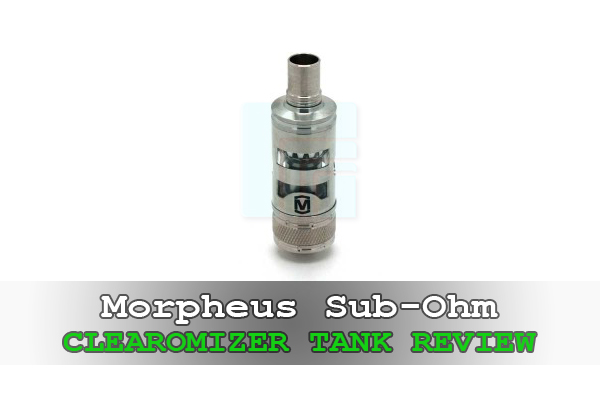 In midst of all the sub-ohm clearomizer chaos, there’s the Morpheus Sub-Ohm Clearomizer, which was made by Vapor Tech.  The company is based in Shenzhen, China… where it manufacturers electronic cigarette products, including operations of ODM and OEM manufacturing.  The company isn’t that well-known within the vape market, but has produced some products that have seen light, such as the Olympian Clearomizer.  To try to keep up with the rest of the crowd, they’ve breached the sub-ohm portion of the market with their latest release.  Today, I’ll be reviewing that new endeavor, the Morpheus Sub-Ohm Clearomizer Tank.

The Morpheus Tank looks nice, but seems like there is just so much going on that is really doesn’t fit my personal taste.  Don’t get me wrong, I like that this tank was designed in a different way than other sub-ohm tanks to give it some originality.  Starting from the top there is a stainless steel wide bore drip tip that has been tapered down to a smaller size.  Below that is the top cap, the center stainless steel piece to cover the pyrex glass, then the bottom base, which has an adjustable airflow ring that has been corrugated for easy adjustment.

Packaging:  The Morpheus Clearomizer comes in quite the unique packaging – a lot different from what you would typically see a clearomizer being packaged in.  The Morpheus is sat upright inside a clear plastic boxed container.  Holding the Morpheus Sub-Ohm Clearomizer upright is a bright green cardboard piece that sits at the bottom, while another rests at the top.  The top cardboard box piece act as another compartment on its own to hold additional products, such as an extra 0.5Ω replacement coil and the user manual.  To be quite honest, whoever designed the packaging for the Morpheus is pretty clever, I give them that. 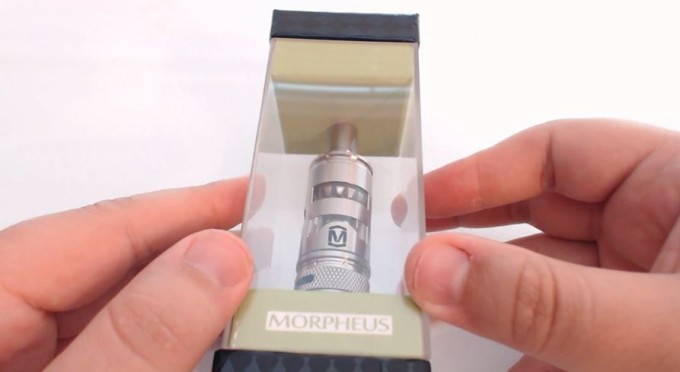 Quality:  The quality seems fine throughout the Morpheus, it’s made of stainless steel and utilizes pyrex glass for the tank portion of the clearomizer.  There’s a lot going on with the Morpheus, so there’s a lot of cut outs and etchings, but they all look to be machined very well.  There is no o-ring inside, but more of a rubber grommet very that looks exactly like what the Atlantis uses.  The only quality issue I’ve noticed is that the o-ring has some play in it, which doesn’t mean much since I’ve found that with most of the popular clearomizers that have adjustable airflow.

As mentioned earlier, the Morpheus Tank is made of stainless steel, utilizes pyrex glass for its tank portion and it holds 2.5ml’s of e-liquid.  Being that this was designed as a sub-ohm clearomizer, it offers a 0.5Ω replacement coil as an extra option and comes pre-installed with a 1.0Ω replacement coil.  As a notation, not only does the grommets look exactly like what is offered with the Atlantis, the replacement coils look the exact same too, just rebranded.  That being said, when you purchase this clearomizer, you’re essentially purchasing an Atlantis with a different look.  Another thing to point out is that even though the drip tip looks to be a wide bore, it tapers down, which makes it almost useless for delivering a better airflow than a normal 510 drip tip.  The tank also has adjustable airflow sporting 1 hole, but four adjustments.  The only downside to the ring for the adjustable airflow is that it takes up a lot of room on the base and doesn’t leave much room to put your fingers to unscrew the tank when refilling or replacement the coil. 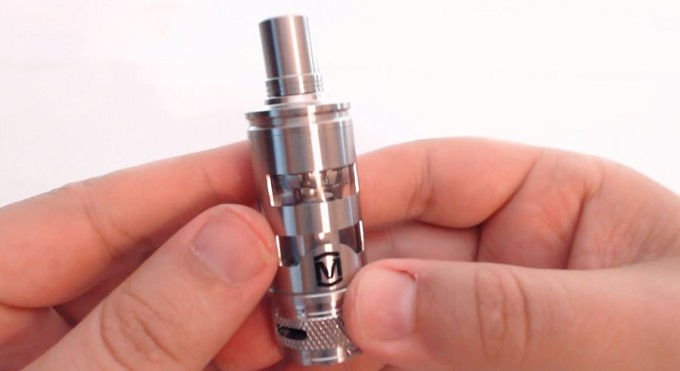 The Morpheus Clearomizer performs great… and pretty similar to the Aspire Atlantis.  Though I wish the airflow was a bit more wide open, it still puts out the clouds very easily.  Taking this clearomizer up to 40 watts with the 0.5Ω coil gave a strong hit, it had some heat to it and it poured out vapor while continuing to keep up, so the wicking job on these coils are working exceptional.  With so many options for clearomizers on the market, I wouldn’t say this one is the best, but it definitely does its job well and gave me a great experience using it.