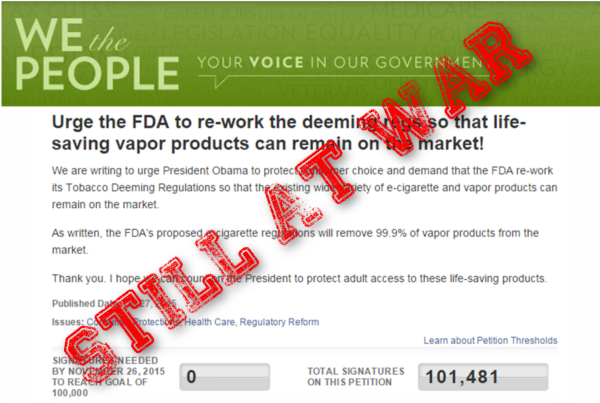 A white house petition garnered 100,000 signatures and many vapers sat back and said job well done.  Those same vapers have, on occasion signed petitions or taken part in calls to action from CASAA (The Consumer Advocates for Smoke-free Alternatives Association), but getting the majority of vapers involved in this war seems to be nigh on impossible.  Many do not realize that the vaping industry is under constant attack, there are many entities and corporations that would love nothing more than to see our mushrooming industry vanish over night.  They would like to see vapers once again turn back into heavy smokers.

Getting Vapers Involved In Their Own Destiny

The destiny of this industry is not set in stone, a piece of paper crossing the Presidents desk, along with several thousand others every day will not make a massive difference, although it may make him ask a couple of questions.  If we leave this to the vetoing power of one man, we have already lost the war, we need to win it in the court of public opinion long before his signature is required.  While there are those who have been neck-deep in this fight for years, there are a large number of vapers who, at the mere mention of advocacy scoff like the future of the industry isn’t important.  Call me old fashioned, but the right to vape is a pretty big deal, not so much for the people who are vaping right now, but for the millions of smokers who are still hooked to those little white cancer stick.  By not getting involved in saving the industry as it stands to day, these lethargic people are in essence writing a death warrant for our way of life and stealing a potential future from people who haven’t been lucky enough to be helped.

Every time I go to Facebook, it seems the same names pop up on every advocacy site.  I don’t think that Greg Conley from the AVA (American Vaping Association) spends more than 1 night at a time in his own state, let alone in his own bed.  Every time I look up, he is appearing at another senate hearing or running to the other side of the country to help put out the latest fire caused by the latest lie released to destroy the industry.  We have advocacy groups, like CASAA and Not Blowing Smoke who spend all their time fighting for our rights, doing everything in their power to keep the head of the industry out of the icy waters that doing all that they can to drag us down.  We have amazing trade associations, like SFATA on a national level, and in my local state KYSFA ( the Kentucky Smoke Free Association) who are tasked with attempting to get all the business owners on the same page, trying to help them stay in a position to make money and make the industry a safe place for consumers.  These people are facing a gargantuan task, and it is our responsibility as consumers, voters and vapers to do our part.

In a release earlier this month, the CDC stated that it approximates there are currently 9,000,000  voting age adults in the United States regularly using vapor products.  This includes everything from cigalikes from the gas station to high end set ups, which I have seen time and again used as a divisive wedge with in this industry.  At the end of the day, if a person inhales vapor from any device, they are a vaper.  We watched a single white house petition take almost a month to acquire 100,000 signatures we need to work on getting the other 8.9 million vapers engaged in the battle.

Another one of those names I see regularly in my news feed is from Stefan Didak of Not Blowing Smoke.  Talking about an earlier post from Nick “Grimm Green” , this very poignant message came across my desk:

Please read! It’s a very important message!!!!!
I’m sorry to those who may be upset that I have not posted the petition daily, or those that believe that I should have the link in my Bio. But as my friend Nick Green so eloquently put it on his page last week, please sign it, but don’t you dare let that be the only thing you do.
Petitions are by far the least effective way to make a difference in our government. If you truly want to make a difference you need to do more; call your congressman, write your Senator. Tell them that you are a voting member of their district and that this is a very important issue to you. Be professional, have factual information, not just vaping helped me stop smoking. Because guess what… To a lot of them… Vaping is smoking!
The best thing you can do is support the organizations out there doing the real work to make sure we have a voice with the lawmakers; SFATA, CASAA, Vaping Militia, etc… These organizations are hiring lobbyists and attorneys to fight these laws and they need your help.
So yes, sign the petition. But once you have please don’t think that means you’ve done your part. It only means you’ve scratched the tip of the surface of your part. If you really want to make a difference, do more than the minimum.

Strong words, maybe, but the message is simple.  If you want the privilege of vaping you should be involved, on a daily basis with making sure it stays around.

Your Voice Is More Important Than You Realize

Currently, CASAA has less than 8,000 testimonials from vapers, the very stories that they can lay down in hard copy in front of law makers across this country.  Imagine the impact that your story on a law maker.  It may be similar to others, but in reality you are a number who should stand up and be counted.  Imagine if all 9,000,000 people currently using  Electronic Nicotine Delivery Systems all submitted their stories.  The amount of paper required to print them would be ridiculous, but they will also show these law makers that our numbers are important.  We vape, We Vote, is rapidly becoming a mantra around the country and many are looking to replace law makers who refuse to see sense on this issue as in reality those who stand against vapers do not have the interest of public health in mind.  Call your local government representatives, send them letters and meet them in person with the truth about vaping.  You may be the person who shows them the path that they should currently be walking down, or maybe remind them that the lies that have been spread over the last few years are about to be exposed in a huge fashion.

The Vaping Prohibitionist Movement: Why They Will Fail
Quick Video Showing The Best of 2015 Awards
Comment