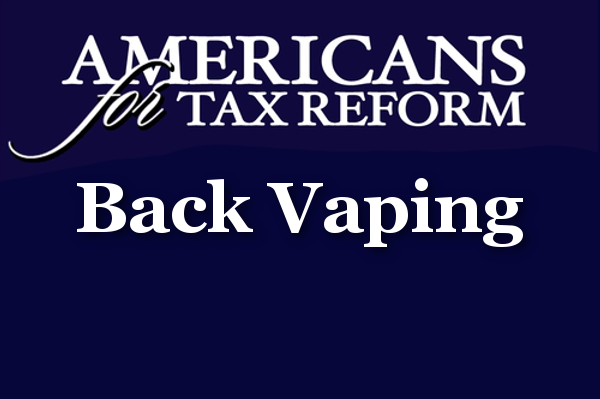 As the battle to save Electronic Nicotine Delivery Systems ( E.N.D.S ) movement from a de facto FDA ban heats up, we are hearing new voices speak up on both sides of the debate.  Americans for tax reform may not be an organisation that many have heard of, but  last week they made their opinions clear in a letter to members of congress regarding the vaping industry.

As we already know, without congressional intervention the FDA will require that all products that have come to the market place since February of 2007 will be required to go through a Pre Market Tobacco Application process that is, in essence,  a way to make 99% of these life altering products currently on the market disappear over night.  The reason for this is simple, for each SKU (stock keeping unit) a company holds, they will be required to pay an estimated $5-7,000,000 to be even considered to be allowed to go forward. When you consider many of these small businesses have an average of 100 SKU’s on the books, the costs are prohibitive at best.  Many of these businesses will close their doors as soon as the deeming regulations go through, costing thousands of people to lose their livelihoods as the figures being thrown around by the FDA are so unrealistic that non but a few of the giant corporations would be able to comply.

Who Are Americans For Tax Reform

Americans For Tax Reform are a tax payer advocacy group, who have a simple goal in mind. They are looking for “a system in which taxes are simpler, flatter, more visible, and lower than they are today.”  As a conservative tax reform group, from the outside looking in, one may wonder why they are getting involved in this argument, but it is their belief that “The government’s power to control one’s life derives from its power to tax. We believe that power should be minimized.”  They are about small business, small government and keeping as much of Uncle Sam’s hand out of citizens back pockets as possible.

While they are referring to the tobacco industry as a whole, read the entire letter below to see their stand point on the E.N.D.S industry:

I write today in support of efforts to save the thousands of small businesses in the United States who are selling tobacco-free technology products to adult consumers trying to kick their smoking habit. Though reliant on the sale of tobacco products for billions of tax dollars annually, Congress should help facilitate all efforts by the free market to accomplish what stiff regulations and taxes never could, getting smokers to quit for good.

Unfortunately, without Congressional action, an overreaching Food and Drug Administration (FDA) will proceed with an arbitrary bureaucratic hurdle for the sale of vapor products more akin to prohibition than reasonable regulation. Unable to regulate tobacco products until 2009, the Tobacco Control Act (TCA) established a predicate date of February 15, 2007 at which all new tobacco or tobacco-derived products must establish “substantial equivalence” to products sold before then in order to avoid an expensive and lengthy pre-approval process by the FDA.

Without Congressional action, the FDA pre-approval process will cost upwards of several million dollars per product, a cost affordable to none other than the large tobacco companies, for products already being sold to consumers. Since 2007, significant innovation in the electronic cigarette and vapor product category has occurred, meaning nearly 99% of the life-saving vapor products on the market will cease to exist.

Amending the predicate date established in the Tobacco Control Act for new products will do nothing to impede upon the FDA’s general efforts to regulate this product category. In fact, grandfathering in all of the products currently being sold to consumers, will save the agency at least two year’s worth of paperwork and allow them to focus on encouraging good manufacturing practices, among other things.

A predicate date change to the date of FDA deeming regulation enactment will simply allow innovation to continue, without decimating an entire market of smoking cessation products and the consumers who use them.

In testimony to the Senate Commerce Committee last June, Matthew Myers of the Campaign for Tobacco-Free Kids explained, “Responsibly marketed and properly regulated, e-cigarettes could benefit public health if they help significantly reduce the number of people who smoke conventional cigarettes and become sick and die as a result.” He explained further that if properly regulated, “I don’t think there is any doubt that there would be a reduction in harm,” from smokers who switched to e-cigarettes. He is absolutely right on this point.

A recent Centers for Disease Control (CDC) survey suggests that there are more than 9 million adult consumers of vapor products in the United States. This represents the greatest accomplishment in public health in decades and is due entirely to the free market. This rise corresponds with a significant decline in smoking rates among Americans and is no coincidence.

That is why I support a change in the 2007 predicate date, which would permit products currently being used by consumers to quit smoking to continue to be sold. This very reasonable step has been put in legislative language authored by Rep. Tom Cole (R-Okl.) in the form of H.R. 2058 and exists in similar form in an amendment made to the House Appropriations Rural Development, Food and Drug Administration and Related Agencies agriculture appropriations bill earlier this year.

Unlike smokers, adult vapor product consumers are becoming single-issue voters who correctly attribute their switch from combustible tobacco products to smoke free alternatives like e-cigarettes to saving their lives. To crush this new and emerging industry would reverse decades of efforts to get people to quit smoking.

I urge Congress to amend the Tobacco Control Act predicate date for the tobacco-derived products in the electronic cigarette and vapor product category in an effort to protect public health and protect American jobs. Such a change in the predicate date would not interfere with the short-term goals of responsibly regulating the products; it would simply help avoid the looming economic and public health disaster associated with status quo prohibition.

The message that the author so eloquently gets across is simple.  By changing what he calls the predicate date of the Tobacco Control act, congress would prevent the FDA from destroying an entire industry over night.  It will not prevent the FDA from doing their job in reasonable regulation of this industry but will prevent them from putting a strangle hold on what he refers to as  “the greatest accomplishment in public health in decades”.  Using the words of those who are rapidly being seen as one of the vaping industries greatest threats, there is little doubt in anyone’s mind that compared to cigarettes, the harm reduction properties of these products are very real.  The truth of the matter is, in 2007 many of the products that work so well today did not exist and if congress allows the FDA to have its way many people who have walked away from cigarettes may go back to a habit that will cost the government billions in health care.  Vapers are rapidly becoming single issue voters, they have seen first hand how vaping can change, and save, lives.  They understand this industry better than anyone else because they are living proof that moving away from cigarettes is possible with vaping, unlike the countless “FDA approved” methods of treating nicotine addiction.

As an industry, we should be thanking Americans for Tax Reform for their support.  We have been looking for voices outside the movement to stand up in our defense for a long time and this voice booms in the halls of the Nations Capital.  All smokers want is to be left alone in their effort to get away from cigarettes, and we have in our hands the ability to make that journey much easier.  Rather than trying to regulate us out of existence, maybe the FDA should be looking to the vaping movement to turn that 9,000,000 vapers into 90,000,000 and eradicate the root of the problem, the combustible tobacco industry instead.