Ontario’s Bill 45 Has Vaper’s Out In Force 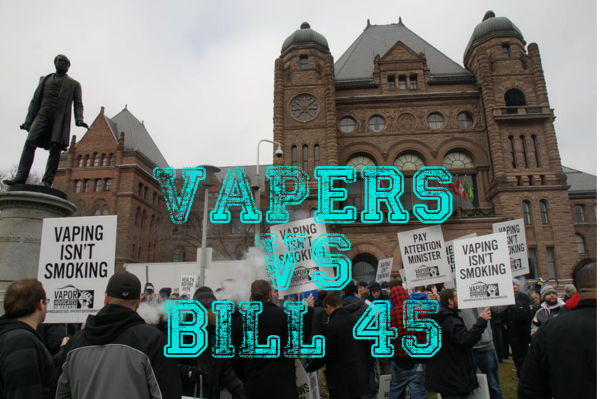 While here in the United States we are facing the upcoming FDA regulations that threaten to effectively destroy the vaping industry, our cousins in Ontario are facing a similar fight.  Today in Queen’s Park, Ontario’s Bill 45 Schedule 3 had hundreds of vapers out in force.  While the ruling they are protesting passed in May, many people, including some in Government are looking to quash this law before it has a chance to be implemented. 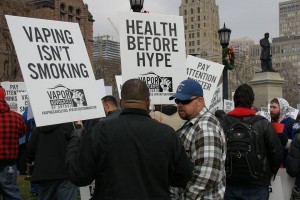 Bill 45 is 3 part act, running under the moniker of the ” Making Healthier Choices Act 2015″.  Parts one and two regard ” Healthier Menu Choices” and “Smoke Free Ontario” but the third schedule is what has vapers up in arms. At first glance  parts of this bill are common sense regulation such as outlawing sales to minors, a move which the majority of the industry across the world has already put into place.  Unfortunately Minister Dipika Damerla and her team have taken it upon themselves to regulate Electronic Nicotine Delivery Systems, whether or not they actually contain nicotine, as tobacco products.  Many of the laws in Schedule 2 of Bill 45 have been rolled down the page, effectively the devices that are rapidly achieving what 40 years of anti tobacco rhetoric has failed to do.  As well as outlawing the sale of electronic cigarettes or any of their components to minors, they have also effectively outlawed the sale of any flavored e-liquid:

According to media sources in Ontario, this also includes menthol.  One of the main draws for vapers is the fact that they do not want to associate with the flavors of anything cigarette related.  This isn’t even the worst part of this bill.  One of the largest problems we are currently facing as an industry is the fact that some people are incorrectly using devices.  We have all seen the news stories of ” I blew my head off with a vaporizer” and all know why these things happen.  If  a person is correctly trained how to use a device and uses it accordingly, there is little to no risk of equipment failure.   Imagine a world where no one is allowed to discuss their setup  with a trained professional, where no one is permitted to tell a customer not to use a tank on a hybrid mod.  That place no longer needs to be imagined, it is called Ontario.

(2)  No person shall promote electronic cigarettes,

(a)  in any place where electronic cigarettes or tobacco products are sold or offered for sale; or

(b)  in any manner, if the promotion is visible from outside a place in which electronic cigarettes or tobacco products are sold or offered for sale.

(3)  Despite subsection (2), if the regulations so provide, a person may post signs providing information about electronic cigarettes and their price, but only if the signs meet the prescribed conditions.

(4)  Despite subsection (2), if the regulations so provide, a person may make available a document providing information about electronic cigarettes and their price, but only if the document meets the prescribed conditions.

They can put up a sign telling you how much they cost, but they aren’t allowed to tell you the setup you just walked in the door and asked for requires batteries and coils.  As a consumer, you will not be able to see the devices out of the box or even out of the case.  You will be making a purchasing decision based solely on information you had when you walked in the door.  For advanced vapers this may not be a problem, but for the smoker walking in from the street the ramifications of this are huge. We then get into my favorite part of this bill, which in all honesty couldn’t get more ludicrous if it tried.  We have the “Enclosed Spaces” portion of the bill.   Vaping at work is a no go, or any enclosed public spaces for that matter.  If you are seen to vape in a vehicle with anyone under the age of 16 present, you are breaking the law and instantly fined $250.  We have also  been lead to believe that if a person is driving a work vehicle and is seen vaping, they are seen to be vaping in an enclosed work space, and can be fined accordingly. 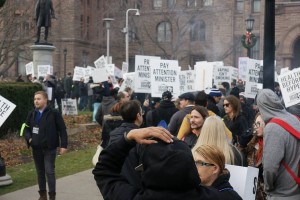 Organised by Vaping Advocates Of Ontario, the rally today saw hundreds of vapers take to the streets to tell their government that the rules they put forward will not wash.  While everyone agrees with restrictions on sales to minors, yet another  government is failing to see that the flavors used in Electronic Nicotine Devices are paramount to adult smokers breaking years cigarette addiction.  The restrictions being proposed would effectively stifle the vape shops ability to help those smokers figure out what works for them.  If, when I started vaping, I didn’t have access to a plethora of wonderful flavors and information on which devices would work best for me, I would probably never made the switch.  The focus of the rally was simply what vapers do every day.  They were attempting to educate people who have no idea about the products or industry how powerful of a tool this is in the global war on smoking.  While those in power are clinging like rats on a sinking ship to research being churned out by special interest groups, today many news organisations showed up and gave a much greater voice to those who were out in the cold.  The message was simple:

Vaping is not smoking and shouldn’t be treated as such.  The way that Bill 45 is currently written, it is essentially treating vaping just like tobacco cigarettes.

Whether in Canada, the United States or many other countries, it seems that the majority of us are having the same arguments with our governments.  What they call anecdotal evidence, we call fact.  There are former smokers every where who can attribute their smoking cessation entirely to vapor products yet it seems that those in power are unable to grasp this fact.  As long as they cling to the idea that there is no difference between our products and the ones that nearly killed us, we will have a constant struggle.  It is entirely possible that each and every one of us, the people who use these products day in, day out are wrong.  It is entirely possible that by writing these laws they are actually looking out for our best interests, but then again it is also entirely possible that in that particular universe, the Earth is made of peach cobbler.