Do People Really Believe This? The Dirty War Against Vaping 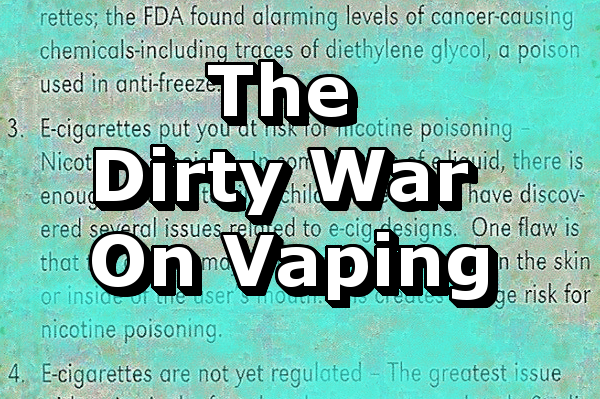 I recently wrote a piece on the public vaping ban enacted in Ashland KY.  Today, in “Do People Really Believe This? The Dirty War Against Vaping” we are going to look at some of the propaganda that lead to the elected officials, both there and in other parts of the country making decisions that will in 10 years time have people asking what the hell they were thinking.

Public officials hate vaping for a variety of reasons, some of which are actually quite sweet.  Some of them actually believe they are doing the general public a service by removing our way of life from view as they have been told that the very thing that will help to get rid of combustible tobacco is actually as bad if not worse than the things they have been fighting against for almost half a century.  While the English Government, all the way up to the Prime Minister, are embracing vape mods as the cure to the greatest man-made disease of all time, we have useful idiots here handing out documents to people and pretending that they know what they are talking about.  Rather than researching and learning the truth about what they are fighting against, they base their entire opinion based on the first 50 taglines that pop up on Facebook as a viable legal argument.  There are more nefarious reasons for wanting the act and industry of vaping to disappear, but today we aren’t looking at the Local and Federal organizations that are losing billions of dollars because cigarette companies aren’t making the profits to feed them anymore.  The puppet show is very real, the people who are fighting for cigarettes to disappear would lose their jobs if they ever achieved their goal, just take a second for that to sink in before we sink our teeth into the propaganda being thrown around. 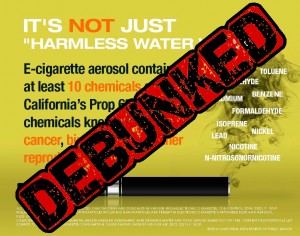 A Headline Does Not Make It A Scientific Study

Fun story for you.  Over the last year, actually longer, I have read every scientific study that has been released about vaping.  The good ones, the bad ones, if it is released it is my job to sit here and go through every aspect of what they release.  Not as a journalist, but as a human being who is seeking the truth about the products that are being used by 9 million people in the United States and 2.5 million people in the United Kingdom.  We are coming at the vaping phenomenon from a different perspective than smoking was originally seen, the general population are generally wary of the technology because people believed that “smoking was safe” for so long.  They have every right not to trust this industry at the first glance, so they rely on scientific data to show them the truth.

Unfortunately, we live in the age of instant gratification, where the acronym TLDR (too long didn’t read) pops up regularly.  People rely on the headline without digging into the facts.  If I wrote an article, with the headline:

Your Kids Are Vaping Ear Wax: Do You Know what they are Smoking

Regardless of what evidence I put forward, you have already formed an opinion that your kids are sitting behind some dark, dingy little building with a vaporizer huffing ear-wax and getting high.  If that headline was from a massive, trusted university or your everyday news source, you wouldn’t even read the contents, just take it at face value.  My personal favorite is absolutely amazing:

If I read that with my morning coffee, I would throw away anything vape related I have in my house.  Fortunately, I was trained at a young age to seek out the truth, regardless of its source and form my own conclusions – I’m pretty sure someone famous said that once –  but in this day and age we have too many people who don’t have the time to look into anything in detail.  For every piece of negative information that comes out, there are researchers who pick apart the studies in minutes, but by that time the media have already looked at the press release that was sent out with the research paper and wrote an entire story based on what they think it says without actually reading the data.

The problem we then have is the useful idiots believe that spew the headlines like parrots, without ever having looked at a single piece of information.  This only becomes a problem when the person in question is about to go in front of a council/assembly and tell them why vaping should be banned.  This person is trusted by the members sitting on the bench as a “health care professional” and they basically have no more knowledge on the subject than the guy cleaning out the toilets at the hospital.  As vapers, we generally dig through the dirt to find the truth, unfortunately, to many people we are nothing more than smokers with shiny new toys to play with, they don’t realize that we are vaping to save our own lives.

Time To Bring Out The Crazies

If I were to sit here and mention Still Blowing Smoke from California or #vapingtruth from Chicago, vapers who are fighting for their rights would have an involuntary reaction such as dry heaving or insta-rage, because we know that these groups and many like them are spending millions upon millions of dollars to make the vaping industry disappear.  They are more interested in smokers continuing to die than using a much less harmful alternative that they can not tax as tobacco.  Pretending to protect the children from future use of tobacco may sound like a grand plan, but if that was their goal they would have outlawed cigarettes many years ago.  The city of Chicago didn’t get involved in this fight until it realized it was broke and needed a fast way to make lots of money, rather than trying to ban vaping they just taxed the pants off it.

After big cities throw their weight into the arena, you get small town USA poking its toe into the water, not so much because they want to make money off people trying to stay alive but because they believe the filth that is spewed from these trusted sources.  If Rahm Emanuel says it’s bad for Chicago, it must be bad for everyone, right.

Now, imagine walking up to a local vape shop and as you walk past the tent that has been set up outside, expecting someone to be selling Girl Scout cookies you have a leaflet pushed into your hand.  The lady who gave it to you starts telling you how dangerous the products inside that shop really are, not only for your health but also for anyone who happens to be standing close to you while you are using them.  You are a long time smoker who was going to try vaping to get away from cigarettes, because you had been told by many people, both in person and online, how helpful they had been to aiding them in quitting.  When you look down at the leaflets in your hand, they are printed by your local health service, this information is coming from the people you trust with the well-being of your family.  What do you do? 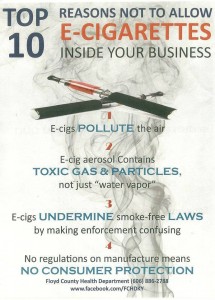 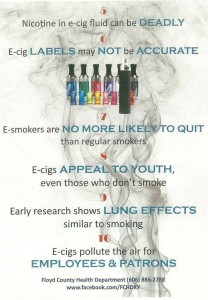 Now here’s the part where this gets tricky.  As someone who has not looked into vaping and has no idea that the things written in this pamphlet have been debunked more times than the false moon landing theory, you will take the words in front of you as gospel.  You have no scientific data to back up the claims but these notions have been burned into your psyche.  Are you going to spend hours learning the truth or are you just going to swallow the pill they just fed you.  Other than number 3 on the list, everything else has been proven entirely false, but that one says it all: It looks like smoking so it is confusing.

E-cig aerosols containing toxic gas and particles is a myth that was debunked the day after the “study” was released.  The truth is, reporters decided to make up their own headline after they were presented with something that proved that there was no evidence to back up the claim  Why actually read the document when you can make up something that is sensational right.  Unfortunately, with all the useful idiots, this seems to resonate the loudest.  The more outlandish the claim, the faster they seem to swallow it.  The idea of lung effects from vaping being similar to smoking is equally ludicrous, many vapers are actually showing lungs that look like never-smokers after a very short time frame, but because someone put a headline on a Facebook feed it has to be true.  Even though no studies are referenced on this leaflet, I can point you in the direction of the “study” that the claim came from as well as all of the evidence that flushes it down the toilet where it belongs.

The biggest problem that I personally have with this and other campaigns like it is the fact that this information is coming from groups that people should be able to trust.  If I can’t trust my doctor to tell me the truth about vaping, what else is he lying about?

Cleaning Up The War

It sounds like an almost impossible task, how can vaper’s and advocates turn this onslaught around so that people will start to not only see the truth but start to believe it.  We can sit here and talk until we are blue in the face, but until we can stop the spread of hateful and malicious lies we are nothing more than a tiny blip on societies radar.  The majority of people really don’t care, they don’t smoke, they don’t vape and they don’t want to see clouds of anything around them.  Vaper’s are pariah’s, they are just smokers working for the evil tobacco companies trying to steal their children’s souls in the middle of the night and deliver them to Joe Camel for a free bottle of something called e-liquid.

This industry is being portrayed as worse for society than smoking ever was and that needs to change.  Rather than ignoring the useful idiots, the vaping community as a whole needs to start meeting them head on and replacing their fiction with cold hard facts.  Be educated, don’t be a headline warrior, if you want to win an argument, stamping your feet won’t work as well as handing them scientific evidence that refutes their ase and makes them look like an ignorant fool.  Just remember though, that just because someone is wrong doesn’t necessarily mean that they are evil, just misinformed.