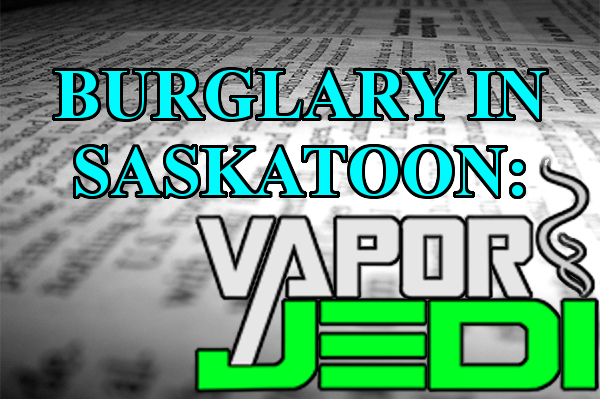 Saskatoon-based Vapor Jedi  lost $20,000 in a brazen burglary in the early hours of Tuesday morning. This is just the latest in a series of break-ins that have plagued the vaping industry over the last few months.

After drilling the deadbolt lock on the door, the thief spent a total of 4 and a half minutes emptying the display cases throughout the store, placing mods, accessories and e-liquid into the massive duffel / hockey bag he had brought with him.

Dressed with gloves, hoodie, oversized coat and face mask, the thief seemed unconcerned with the cameras that were around him as he looked directly into the security system on more than one occasion.

Even though the security system was activated as soon as he opened the front door, local law enforcement arrived 6 minutes after he had made his escape.

This thief looked as though he had a plan when he walked through the door and knew that he didn’t have much time to work with before police showed up.  This certainly didn’t look like his first time burglarizing a business.

The thief certainly made the most of his time inside, emptying display cases, storage compartments and shelves of just about everything he could fit into a bag that could easily hold a body.  As he hauled his loot out of the door, one could have easily mistaken the thief for a murderer as he struggled to pull his sack from the premises.

Over the last several months, it appears more vapor shops are being targeted by thieves as they understand that these businesses have stockpiles of equipment and accessories that are easy to sell online with little chance of being caught.

This is what brings us to the purpose of this post.  As a vaping community, we stand by each other all the time and now we are asking for everyone to keep an eye out for the merchandise that he stole.  Some of these items are not exactly common and the thief will probably have a hard time getting rid of them especially in the local area as the shop owner Mitch Tarala has put out a list of the items taken from the shelves.

The following is taken from the SASKATOON STAR PHOENIX:

Tarala said he doesn’t know what the thief would do with the mountains of very specific equipment and juice. The type of electronic cigarettes and expensive modifications involved are rare, he said.

“These aren’t common products. It’s not that hard to tell where (they) came from.”

News of the theft has spread through the electronic cigarette community in Saskatoon and beyond. Tarala said Vapor Jedi sells its products online to people all over the country.

“The guy is not going to have a good chance of selling it,”

Over the coming days, Mitch will be releasing a complete list of all the items taken, and from what I have seen so far, the list is huge.  In the mean time

In the meantime, however, everyone can be of service in this matter.  The store owner has put out a request to the vaping community:

Let us know if you find anyone selling a lot of new or “like new” mech mods, regulated mods, RDA’s, or e-liquids which could have been stolen from our store.

Let us know of anyone trying to sell “overstock” e-cigs and mods or liquids and who seems sketchy.

We are offering a $1000 (CAD) reward for information that leads to the capture and conviction of this criminal.

Please send all relevant information to [email protected] or to our Facebook page at https://www.facebook.com/VaporJedi

For complete video footage of the burglary in progress click here

Let’s see if we can help them get this guy!