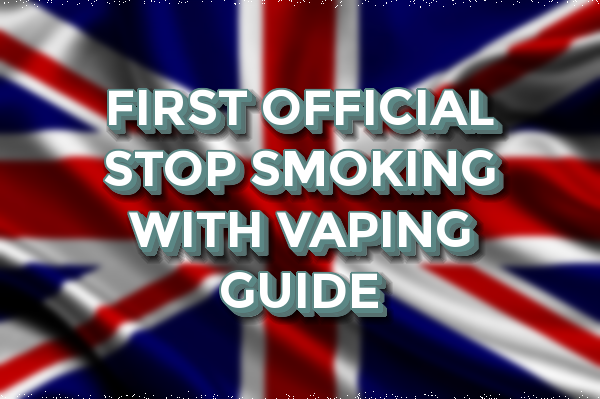 Public Health England, the Government organisation who were heralded around the world as the first to recognize vaping as a tool for success in the fight against combustible tobacco have released the world’s first official guidelines to stop smoking services.

After publicly declaring that vaping is a 95-99.9% safer alternative for nicotine consumption than traditional cigarettes it has pushed forward with plans to introduce the vaping phenomenon to all smokers who are looking to quit their habit.

The 48-page manual, distributed by the NATIONAL CENTRE FOR SMOKING CESSATION AND TRAINING takes an in-depth look at some of the misconceptions surrounding vaping as well as some great advice for health care professionals looking to help their patients.

What’s In The Book?

While here in the States we have public health officials and Government agencies scratching their heads and claiming that they do not have enough information on the vaping phenomenon, here we have an organisation that is moving forward with a plan.

The first part of the document hits on the biggest myth surrounding nicotine:

Nicotine does not cause smoking related disease, such as cancers and heart disease. These are caused by other chemicals found in tobacco smoke.
Nicotine is addictive however and it is why people continue to smoke despite knowing about the harmful effects of tobacco.
Nicotine in e-cigarettes poses little danger to adult users.
In order to prevent accidental poisoning of children, e-cigarettes and liquids should be stored away safely (just as you would with household cleaning products and medicines, including NRT products).

This organisation has taken tobacco harm reduction back to its roots.  The fight was never about abstinence from nicotine but finding a safer delivery system that didn’t contain all toxins found in cigarettes.  They even go as far as to include the following:

Don’t be alarmed about recreational nicotine.

This is a choice some people make, and it is not the business of stop smoking services to make judgements about this.
We are not a ‘stop nicotine service’ and if we think getting people off their e-cigarette is a good use of our time, we are ignoring a far more important opportunity to help people quit and to stay off cigarettes.

The difference in thinking between the English public health authority and the USA is striking.  You have one who is recognising the potential of the Electronic Nicotine Delivery Systems, focusing on their ability to reduce harm rather than the abstinence-only approach we are being force-fed daily.  A good analogy is the difference between giving your child a condom or telling them to keep it in their pants.  Hoping and praying rarely works but at least if they are carrying protection you can sleep at night knowing you gave them the tools not to make you a grandparent.

People use nicotine, it is a fact.  It is as true as the statement that people will wake up every morning and make a coffee.
Caffeine and nicotine are about as addictive as each other and as dangerous in large quantities, but you don’t see people screaming to ban Starbucks or McCafé.  The anti-smoking campaigners have turned nicotine into the most deadly substance since the discovery of arsenic, but PHE and the NCSCT are ignoring the bloviation and focusing entirely on facts.

There is so much information in this packet, it is hard to condense it to a few facts, but some of the biggest points for US vapers, non-smokers and the general public are as follows:

Is it OK to smoke and vape at the same time?

Yes. There is no evidence that smoking cigarettes and vaping at the same time increases health risks.
However, the greatest health benefits are seen when people stop smoking tobacco completely, so quitting smoking should be the goal.
Stop smoking services can provide advice and support to help.
Some people manage to switch completely to vaping quickly, whilst others take a little time.
You may have to try a number of different e-cigarettes and e-liquids before you find the one that enables you to stop smoking completely, but this is quite normal.

When talking to health care professionals about how to proceed:

Be open to e-cigarette use in people keen to try them; especially in those who have tried and failed to stop smoking using licensed stop smoking medicines. 2. Provide advice on e-cigarettes that includes:

■ E-cigarettes provide nicotine in a form that is much safer than smoking.
■ Some people find e-cigarettes helpful for quitting, cutting down their nicotine intake and/or managing temporary abstinence.
■ There is a wide range of e-cigarettes and people may need to try various types, flavours and nicotine dosages before they find a product that they like.
■ E-cigarette use is not like smoking and people may need to experiment and learn to use them effectively (e.g. longer ‘drags’ may be required and a number of short puffs may be needed initially to activate the vaporizer and improve nicotine delivery). They may also need to recognise when atomizer coils need replacing.
■ People previously using e-cigarettes while smoking (e.g. to reduce the number of cigarettes that they smoke) may need to consider changing devices and/or nicotine concentrations when making a quit attempt.
■ Although some health risks from e-cigarette use may yet emerge, these are likely, at worst, to be a small fraction of the risks of smoking. This is because e-cigarette vapor does not contain the products of combustion (burning) that cause lung and heart disease, and cancer.

This is all information that is being buried here in the States, mainly because it doesn’t fit with the narrative that the Government and their corporate cronies want to portray.

Summary of evidence on e-cigarettes

■ E-cigarettes are predominantly used by smokers who want to reduce the number of cigarettes that they smoke; they are also used by smokers who want an alternative for when they cannot or do not want to smoke, or by those who want to quit.
■ E-cigarette technology continues to evolve and the quality of devices has improved. With experience, users can achieve blood nicotine levels similar to those achieved with smoking cigarettes.
■ E-cigarettes can reduce urges to smoke and can help smokers quit and reduce cigarette consumption; although data on the effectiveness for quitting are not yet as robust as those for medicines licensed for smoking cessation.
■ Taken together, data from two randomized controlled trials shows that old (and now obsolete) brands of e-cigarette were more effective than ‘placebo’ versions that did not deliver any nicotine. The effect size was similar to what is found with licensed nicotine products when prescribed by a health professional. A large observational study of e-cigarettes in the ‘real world’ found similar effectiveness to licensed stop smoking medicines obtained on prescription, and greater than licensed nicotine products bought from a shop.
■ Short-term exposure to e-cigarettes appears to pose few if any risks. Mouth and throat irritation are most commonly reported symptoms and these subside over time. There are no high quality safety data from long-term e-cigarette use, but there is no good reason to expect that their use would be anywhere near as risky as smoking.
■ Low levels of toxicants and carcinogens have been detected in e-cigarette liquid and vapour, but these are much lower than those found in cigarette smoke.
■ The concentration of toxins in exhaled vapour is much lower than that in side-stream and exhaled cigarette smoke, and is expected to pose no measurable health risk to bystanders.
■ Concurrent (dual) use of cigarettes and e-cigarettes has been associated with increased motivation to quit, and to a reduction in the number of cigarettes smoked.
■ Use of e-cigarettes by never smokers remains negligible and evidence does not support the view that e-cigarettes are acting as a gateway into smoking among young people.

The information contained in this document literally covers every aspect of the Antz handbook and give us the tools to fight them with evidence to back it up.  I will leave you with my personal favorite, and ask you to go to the report and read it in its entirety for yourselves.

Are e-cigarettes dangerous, do they blow up or catch fire?

As with any rechargeable device, like mobile phones and laptops, it is important to charge with the correct charger and not to leave an e-cigarette unattended whilst charging.
Ensure that you buy from reputable suppliers and avoid generic charging equipment.
There have been reported cases of e-cigarettes causing fires at a rate of around two per week in the UK, this is far fewer than the number of fires caused by cigarettes.