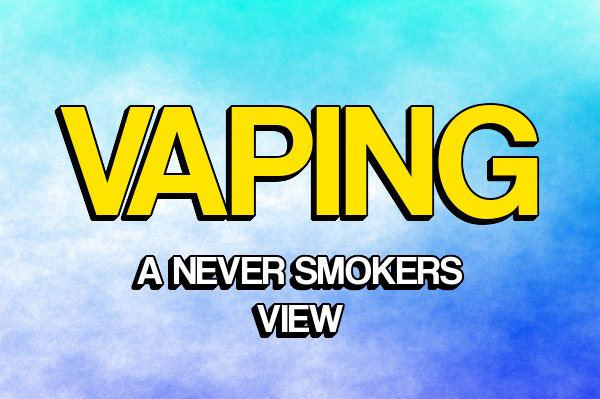 I had a conversation yesterday with a friend who has never smoked or vaped.  He has seen the benefits of vaping to my household and many of our friends over the last couple of years.  With that said, I wanted to get his perspective of our industry as an outsider.  I feel that this is important for vapers to understand, as it gives us the viewpoint of the general public and those who have no dog in our fight.  It will allow us to better grasp their mindset and help the vaping community garner greater support from the outside as more and more states look to suffocate this industry.

I threw a few quick questions at him, got his response and we will take a couple of minutes to discuss them.

Q: What Does the Word Vaping Mean To You?

A: Vaping to me is the act of smokers healing themselves.  When I first came across vaping, I thought the whole thing was just another fad that would fail for my friends, like gum or patches.  I figured after a week or 2 they would just go back to cigarettes because they still needed them but I know people who have stayed away from cigarettes for over 2 years.  I was lucky enough never to get hooked on tobacco but was surrounded by people who were and over time watching them get away from cigarettes has been amazing to watch.

Q: Do You Know The Difference Between Vape Facts And Fiction? 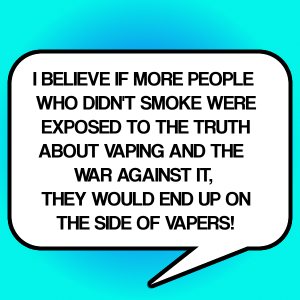 A: As I said, I have friends who vape and can easily find the truth about vaping.  If I didn’t know any vapers it would be easy to fall into the trap being set to make people believe that cigarettes and vaping are the same thing.  There are billboards everywhere and advertisements making vaping bad, but I have to stop myself and wonder why people are trying so hard to take away the option from smokers.

I think it is disgusting that so many groups who pretend to care about people’s health are doing so much to make vaping go away, the evidence is there that people quit smoking with vaping but they refuse to accept it.  I believe that if more people who didn’t smoke were exposed to the truth about vaping and the war against it, they would end up on the side of vapers.

Q: What Is The Biggest Hurdle That You See Vapers Facing?

A: From my understanding, vapers are up against some of the most wealthy corporations on the planet and money talks.  If vaping is so successful and none of these companies have their hands in the cookie jar, they will fight to get their share.  The same goes for the Government, if they don’t get what they see as their fair share they will pound the industry into submission.  I believe that the majority of bans and taxes being thrown at vapers are because the government is losing money and it wants to get it back.

The other major hurdle I see is ignorance.  If vapers don’t do everything they can to educate people like me, we will just carry on believing that the billboards and article on Facebook are right.  If it weren’t for my friends I would still believe that vapor juice had anti-freeze in it or that hitting a mod will cause popcorn or something.

Q: What Advice Do You Have For Vapers?

A: Don’t attract negative attention with exploding pockets or blowing clouds in people faces.  The second one is common courtesy, you wouldn’t have done it with cigarettes, so don’t do it now.  The more people who don’t vape get a negative view of vaping, the harder it will be to keep vaping.  Don’t give anyone a reason to hate vaping other than the ones that are being put on billboards, as you can fight lies, but you really can’t fight the truth.

Keep vaping and keep getting smokers to change over.  The more people who are using the products, the harder it will be to make them go away.  More importantly, the more lives that are touched by vaping because someone quit smoking, the more voices will be raised against regulations and bad science.

The above statements were made by a never smoker who is now battling alongside vaping advocates, because he knows that our technology works and that we are under attack.  What is crazy is the fact that he is one of the most vehement anti-tobacconists I have ever met, but he see’s the potential for harm reduction on a grand  scale.

Take a minute or 2 to reflect on the sentiments in his message and see if you can apply them to yourself and to those who surround you:  more voices in the fight make the oppositions lies harder to hear.