Our friends at TVL (The Vapor Lounge) is set to host the official ECC Detroit 2017 after party at The Annex Detroit on Saturday, March 4th, 2017. 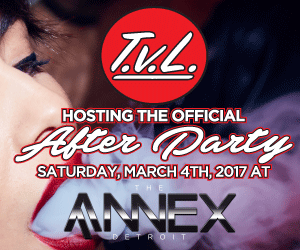 As many are aware, ECC is one of the largest trade show and expo’s within the United States, and they’re kicking off 2017 in one of their best performing locations, Detroit Michigan.  The event starts on March 3rd with a B2B session, then doors open to the public on the 4th and the 5th.  If attendees want to partake in a little extra fun and explore the nightlife in Detroit, The Vapor Lounge, an ECC 2017 Detroit Badge Sponsor, has setup and will be hosting an official after party.

The after party will provide a totally different experience for you to share in Detroit, allowing you to receive extended time with friends and a family of vapers.  If you’re lucky, you might even catch someone trying to pull off the electric slide — how about that for a throwback?

What makes this after party even better is that you get a free entry if you’re of age and have an ECC badge.

If you’re attending the ECC Detroit 2017 event and want more information on the after party, visit TVL at their booth #104.

ECC Shares Its Spend Totals Over $170K On Advocacy