In this iJoy Captain PD270 Box Mod Review, I share close-ups, give detailed information and tell you my thoughts on this snazzy addition to the iJoy box mod line-up. The Captain PD270 isn’t the best device I’ve ever had to review, but I really have no complaints. It uses 20700 batteries, has the option to use 18650 batteries, it has plenty of power, and the more I use it the best it feels in the hand.

Appearance: The iJoy Captain PD270 Box Mod’s appearance is something I’m sure you’ll enjoy. It isn’t really super fancy, but it does have some appearance features that could interest you, as it did me. It offers a compact chassis, carbon fiber inlays and a 0.96″ OLED display screen. Like I said, it isn’t fancy, but it does offer a few features to make it deliver on appeal. It isn’t a big device, though it feels much larger in the hand. The curves are nice, it’s comfortable though having a bulky feel compared to something like an Alien Mod, so if you’re looking for something that isn’t outrageously fancy and more geared towards a stealthy appearance, you may like the Captain PD270.

Features: Don’t expect Bluetooth and crazy gadgetry with this mod, but it does have a nice list of features to entice you. For starters it has a three button setup, a nice 0.96″ OLED screen with a vertical stack as I mentioned, a micro-USB port for charging and upgrades, a bottom hinge and lock battery access door that holds two 20700 batteries or the option of 18650 batteries, and you can expect stainless steel threading with a spring-loaded gold plated center pin. As for power, it offers up to 234 watts, but also has a preheat function with the option of normal, hard, soft, and a user mode to let you dial in what you want. Lastly, like most mods today, the iJoy Captain PD270 Box Mod also has a temperature control suite that has support for ni200 nickel, titanium, and ss316l.

Performance: This mod offers a great performance, like many other iJoy products that have been released. It utilizes the IWEPAL chipset that allows it to reach up to 234 watts, but it also has other cool features such as the preheat function that enhances the performance of this device to your liking. As soon as you hit the fire button, it delivers a nice and consistent power flow. The performance on mods today are all pretty much the same. Some will deliver more accuracy as far as the wattage goes, but for the most part, you won’t be let down when it comes to performance on most devices being manufactured today, especially when it comes to a brand like iJoy. 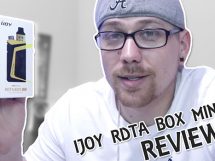 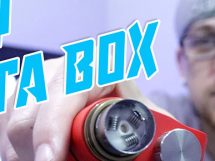