FDA: Conflict of Interest or Business As Usual 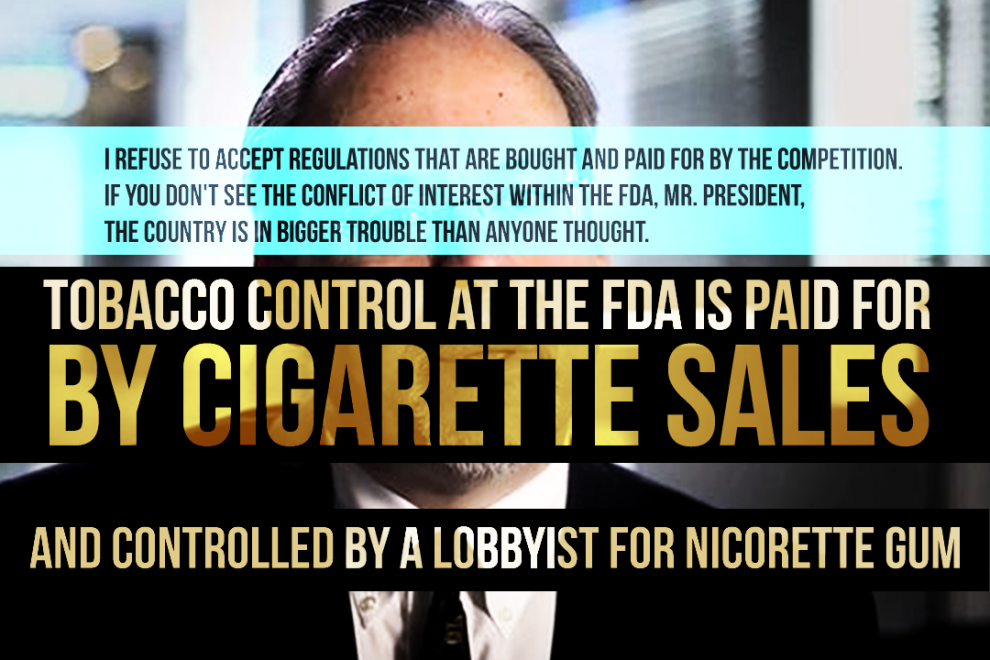 In what began as a Senate Floor speech on the FDA’s proposal to Ban Menthol Cigarettes, several startling facts came to light that truly show the conflict of interest in the Food & Drug Administration. Senator Richard Burr (R-NC) took to the floor with a message that paints the Government Agency in a less than shining light. He discussed the agencies inability to fulfill the tasks they were given and more importantly called into question the leadership’s priorities when it came to not only Menthol Cigarettes but the entire field of harm reduction that they had left to rot.

Let’s Look at The History

Rewind to 2009 when the FDA was given full control of Tobacco Regulation under the aptly named Tobacco Control Act. While he and many other senators were opposed to a single entity controlling such a large market, in true Government fashion what was originally spread out between several agencies was amalgamated into a single unit, the FDA’s Tobacco Control Center. They asked for $100 million a year to run the show but Congress decided to give them a cut of every single piece of Tobacco sold in the United States, something they called a user fee. They were given the mission to help reduce Cigarette smoking using actual scientific data and help to bring innovative new products to the market, quickly, to reduce the massive burden that combustible Tobacco puts on the country. Sounds simple enough, right?

Senator Burr was attempting to address the FDA’s current mindset that destroying adult choices to protect minors, who couldn’t legally buy the products, was a step in the wrong direction. Considering that the CDC data shows over the last 6 years youth usage of any combustible product has dropped by 12.5%, he, like many of us doesn’t understand the need to remove products from the shelves. He stated that the FDA is not only ignoring the trends but preparing to remove choices from adults buying items that they fully understand the risk of.

He stated that in the last 10 years, the FDA hasn’t released a solid framework to bring to market a single reduced risk product – one of the purviews from its creation. There are thousands of reduced risk devices, in the shape of vapor products, that could disappear tomorrow just because the agency refuses to give them an attainable pathway to remain on the market. Last year (2019), the FDA TCC received approximately $712,000,000 in “user fees” from Tobacco related sales. To put this in perspective, the users are paying a higher fee on Tobacco products to give money to the FDA to hopefully create a pathway for reduced harm products.

For those of us who pay attention, there is no real pathway and the FDA pushed to get vapor products stuffed into the Tobacco category, could this be so they can extract user fees from the product that’s knocking their paychecks out the window? It seems as though the foxes are running the hen house and the conflict of interest was just put on full display.

He also went on to say that the FDA is also failing in another massive way- if they were doing what they were paid for and enforcing the law, we wouldn’t need to ban adult products to protect children. The FDA has been derelict in its duty. When Alcohol is sold to minors, the retailer is punished but the FDA just lets Tobacco sales slide. We have an agency called the ATF (Alcohol, Tobacco, Firearms) who aren’t able to look into one-third of their job description.

The part that caught our attention the most though, was when the Senator revealed that 75% of the FDA’s funding comes from private companies. The user fee’s that they collect from Pharmaceutical companies, Tobacco companies and other industries allow them to cherry pick products and stifle competition – the reason you can’t get generic drugs is that the FDA won’t let them onto the market without agreeing to user fees.

In Senator Burr’s own words:

The FDA only works for the American People 25% of the time, the rest is spent doing the bidding of its industry masters.

When an agency regulates 25 cents of every dollar spent in the United States and it believes it’s too big to listen to the Senate, it’s obviously time for some serious changes.