A Complete Guide To The Uwell Caliburn Pod Starter Kit

While it’s more commonly accepted that Uwell is a leader in the vaping industry that specializes in sub-ohm tank systems, the brand has recently expanded its portfolio to offer a wide variety of products, including mods and pod systems. It’s just now making its debut into the pod-based market, and while it’s unsure how consumers will adopt its new products, the consensus thus far with the new pod system is all positive. You must first understand the struggle that Uwell has had when attempting to move beyond sub-ohm tanks, something that Uwell does very well. They’ve made an attempt at rebuildable atomizers, such as the Rafale X RDA and D2 RTA, which didn’t do well. The Nunchaku RDA Kit had moderate success, while the Uwell Crown IV Kit did extraordinarily well. Now it’s taking a step into a new direction with the Uwell Caliburn Pod Starter Kit.

The Uwell Caliburn Pod Starter Kit is a newly added all-in-one vapor pod system that features a sleek design, an innovative dual firing mechanism, and Uwell’s legendary Pro-FOCS flavor technology. The device stands just 110mm by 21.2mm by 11.6mm, giving it a very portable design that’s perfect for those either on-the-go or prefer to be more discreet. While it is compact, that doesn’t necessarily mean that Uwell decided to flake on the quality and structure of the device. The Caliburn is constructed of aluminum alloy to deliver superior strength and durability. It has been designed to not only feel good in the palm of your hand but also to deliver a fascinating appearance, which is available in Iris Purple, Grey, Black, Red, Pink, and Blue color options. 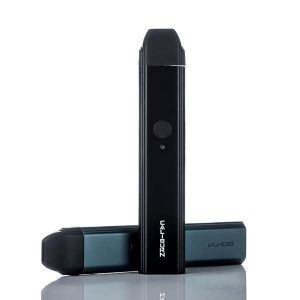 The Uwell Caliburn differs greatly from other pod system devices on the market as a result of its battery design. Where most pod-based systems have an integrated battery, the Caliburn features a removable 520mAh rechargeable battery, which makes all-day use a breeze. Recharging is clearly indicated as well since there is a LED battery life indicator light positioned just below the firing button. Due to its high battery capacity, you can expect a minimum resistance of 1.2-ohm and a wattage output range of 11W. However, the Uwell Caliburn does utilize a direct voltage output, where the current state of the battery will determine its power output. What’s most impressive about the Uwell Caliburn Pod System is the dual firing mechanism, which ultimately allows you to use the device in two ways; draw activated or button activated. A single round firing button is positioned towards the top half of the device and when pressed will allow you to vape. However, in the event that the button fails for whatever reason, the system features a draw-activated mechanism fault diagnosis, which means the device will continue to function properly and carry out its task of firing when you take a draw.

Another big part of the Uwell Caliburn device is the pod portion of the device, which features refillable 2ML capacity juice pods. These pods have a proprietary gold-plated magnetic snap-in connection, making the installation process easier than ever. The pod has a top fill design, where the drip tip doubles as a fill port cover. There is a 3.5mm fill port and features dual fill ports to make those refills that much easier. Within each pod is a 1.4-ohm coil that uses Uwell’s Pro-FOCS Flavor Technology, which recycles airflow from the atomizer core and loads it with condensed flavor. There are two airflow holes, one on each side of the device, giving the perfect draw each time for an incredible balance of both flavor and vapor.

Device Activation Explained: There is no superior method of vaping by default. In fact, you can use it as a draw activated device or a button-activated device. However, what Uwell has done was made the device to default to the latter in the event that one method fails. For instance, if you’re pressing the firing button and the button isn’t working for some odd reason, the system will automatically disable the button mechanism and resort to its draw activated method.

Understanding The Power Output: The power output of this device isn’t based on a wattage number, however, the manufacturer does share that the Caliburn can reach up to 11W. To achieve the 11W output, the device uses a combination of its coil and battery to deliver the output if the conditions are correct. The Caliburn uses a direct voltage output, which means the power output is determined by the current state of the battery. For instance, if your battery is fully charged, you will receive a better performance than if it were halfway charged. 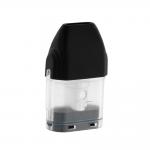 How To Fill The Pod/Cartridge: Filling the pod is super easy with the Caliburn. Each pod has a 2ML e-liquid capacity with a top fill design. This means all you will have to do is detach the drip tip from the pod itself to reveal the dual fill ports. Once the fill ports are exposed, simply fill the pod with e-liquid until you reach the fill line.

Understanding The Pod’s Coil: The Uwell Caliburn Coil is integrated into each Caliburn Replacement Pod. The coil is designed for nicotine salt e-liquids and features a 1.4-ohm parallel coil, which is created to fully atomize the e-liquid and provide a better flavor, a larger vapor production, and a smoother throat hit.