About Guide To Vaping

The Guide To Vaping was first built as a traditional blog, which means it was used as a platform to log information and make it available to the public — in this case, the vaping community.  Though the site has grown into the monster that it is for information, reviews, and news, it remains to be the absolute largest vaping blog on the Internet.  Additionally, the site first made its appearance on the Internet on April 21st, 2011 — quickly gaining traction from the vaping community since it was the first vaping blog that was constantly updated with information that was dedicated to the vaping community.  As a result, Guide To Vaping has become one of the most useful resources, as well as one of the most recognized within the world of vaping.

The Guide To Vaping site offers a robust and very unique blog format.  It was designed in such a way to be a source for all vapers.  Guide To Vaping has split topics into categories, and has separated the categories for a specific type of vaper; Basic Vaping, Beginner Vaping, Intermediate Vaping, and Advanced Vaping.  This allows any smoker or vaper to immediately find the information that best fits them, no matter the experience level.

Though this site has received a good amount of help along the way, Blake Brown has been the voice and fingers behind the Guide To Vaping website.  The site originated from a combination of Blake’s passion for writing and his once new found love for vaping.  Blake viewed the website as a source for logging the information he learned and making it publicly available to other smokers and vapers.

When I first started Guide To Vaping, I knew that I wanted the website to grow. I honestly didn’t think it would gain the success that it has, but I’ve certainly been appreciative over the year’s for how supportive the community has been for both myself and the blog. To be blunt, this website was a blessing for myself… though it has been a lot of work and hours behind this screen, it’s opened doors in my life that I thought would have never been possible. You can pretty much say that the world of vaping has been a blessing in many ways.

Though many aren’t aware of it, Blake has played a large role in the world of vaping besides jotting down information for the Guide To Vaping blog.  He’s also become a known writer within the industry, providing professional and knowledgeable information for other vaping blogs, vaping stores and vaping magazines.  As a result of working for these various companies and information sites, Blake has been able to secure it as a full-time gig.

The website and Blake has received a lot of support and recognition from the community, blogs, stores, and others involved in the vaping community.  Here are some of those accomplishments: 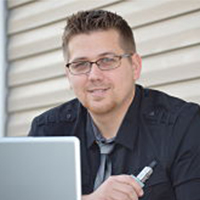