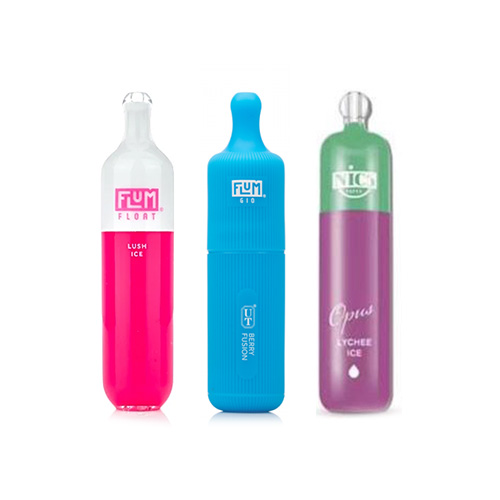 The new Flum Vape Disposable has become the industry’s latest buzz, especially since disposable vaping devices are growing immensely in popularity. Due to the hype around them, people are asking many questions regarding them, and the most asked question of them all is if the new Flum Vape Disposables are any good? We’ve used them ourselves and we’re definitely willing to share our feedback with those of you that are interested.

The new Flum Vape Disposables consist of the Flum Float, Flum Gio, and Flum Nic5 Gio Disposable Vape. All of these devices have a similar shape, yet their design differs a bit. There are key differences between each one, ranging from their puff count to the flavor that they offer. We will go over each device to give you a closer look at them, along with sharing our feedback.

The Flum Float Disposable Vape was the first device to launch the series of disposable vaping devices from Flum Vapor. This device was built perfectly, boasting a compact design, rounded edges, and a comfortable feel in your palm and when using the device. It has a large integrated battery and an automatic firing mechanism, along with an 8mL vape juice capacity to result in a large 3000 puff count. There are tons of flavor options to look forward to, from mixed berries to strawberry ice cream and more.

Our Feedback: The Flum Float made a huge splash early on because of its design and the great flavors in each of the devices. When it comes to disposables, everyone has a large puff count but what it comes down to is the performance, the design and comfortability, and the flavors, and the Flum Float is great at them all.

The Flum Gio was the next device to release in the series, and while it offered the same puff count, battery capacity, and vape juice capacity, there was a new mix of flavors that has kept everyone impressed. If you look at the many reviews on the Flum Float, everyone loved the flavors and couldn’t get over how well they were concocted. The Flum Gio is just as delicious, yet there are even more flavors to explore. What separates the two is the design of the device. The Flum Gio Disposable Vape has a rubber coating on its outer shell, making it more comfortable to use and hold.

Our Feedback: The Flum Gio is an awesome device in the lineup for you to explore. It comes backed with a 3000 puff count, great battery life, and plenty of performance to go after. Add in the fact that this vape has plenty of delicious tastes and you’ve got yourself a fascinating vaping experience ahead.

The Flum Nic5 Gio is the latest disposable vaping device to release in the series, which offers a 2500 puff count, a 6.5mL capacity, and the device uses a high-performance mesh coil to ensure that you receive a larger vapor production and the best flavor possible. While it doesn’t quite give you that extra 500 puffs from the other devices in the series, the flavors are sure to make up for it. You can explore everything from strawberry banana to an ice mint, which is sure to leave your tastes super refreshed and ready for more.

Our Feedback: The Flum Nic5 Gio Disposable Vape is definitely one to consider. It’s compact, convenient, delivers great performance because of the mesh coil that it uses, and the flavors are on point. There are several flavors to partake in, and if you are someone who is looking for a vape that checks all of the bells and whistles, this is definitely the vape you want.