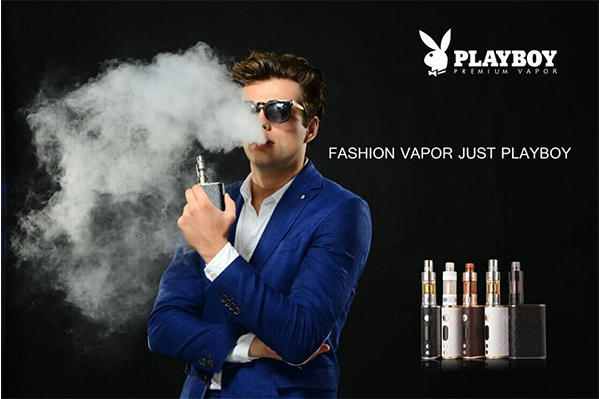 First look: The Playboy brand is now on the vaping market with this LuxBox 150 watt temperature control box mod and Vixen tank combination.  This starter kit is available in 4 different styles, they’re both eye-catching and attention grabbing.

While it is possibly the smallest regulated series box I have seen to date, this little beast packs a serious punch.  Barely bigger than a pair of 18650 batteries, it is hard to grasp the power this little beast throws out.

Each one has been bound in leather, 2 in white, one in black and one in chocolate-brown.  The one we will be looking at today is the chocolate-brown with brass colored accents.  As soon as you pick up the box and pop it open, you feel the quality.  The device is wrapped in a material you would normally associate with sexy lingerie.  You remove the cushion the LuxBox 150 is sitting on to reveal the instruction manual and 2 spare coils for the Playboy Tank (one for regular use and one for temperature control).  There are also recesses for the charging cord and battery for use with the Lux 65, which will be an entirely different review.

After removing the LuxBox 150 from the packaging you will notice the following:  The top is a flat brass colored plate with a spring-loaded 510 connector and sitting in a stamped recessed 22mm cup.  The leather is emblazoned with the Playboy emblem in a diagonal pattern, which appears very stylish and sleek.  Beneath the 510 connector you will find the firing button, super bright OLED screen and selector switches which has now apparently become the standard for the regulated box market.  The buttons are tactile and feel solid.  The base is as sleek as the top, the sliding door of the battery compartment and remainder of the base have ample holes for ventilation and battery vent protection.  The vixen tank that comes with each kit is color coordinated to blend seamlessly with the box mod.  The metal color is perfectly matched  and the chocolate glass of the tank and the drip tip look as though they were designed for high fashion, not the vaping industry. 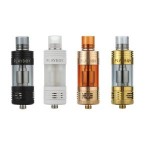 Don’t be fooled by the name and think that this is a gimmicky product, the Vixen is engineered with one thing in mind: flavorful plumes.  I would put this up against any of the other tanks currently on the market in a side by side performance test and it will hold its own.  The adjustable airflow can make it feel as though you are sucking in fresh air, while the openings in the coils allow you to produce massive clouds without even noticing.  This is the only coil I have ever felt comfortable putting 90/10 juice in without worrying about hitting dry.  As of the time of writing, there is no rebuildable deck available, but the pre-built coils are inexpensive and can also be replaced with Ni200’s for temperature control.

Five clicks of the fire button turns it on, something we are all used to.  When the screen turns on, the opening screen says Playboy, just in case you forgot what you were holding.  The device runs from 3 to 150 watts, selection is easy using the plus and minus keys beneath the screen. When you have found the perfect setting holding down the selector keys down for 3 seconds will lock it in place, even after you turn the device off.  The device has a ten second safety feature, if the fire button is depressed for longer than 10 seconds the box will turn off.  Hitting the fire button 3 times quickly turns you over to temperature control.  Temp control runs from 200 to 600° Fahrenheit.  It is responsive, every time you hit the button it eagerly  puts out the power you asked for.

After using the device for 24 hours, it appears to be working exactly as advertised.  Although at first, the idea of a leather-bound mod was a little alien, (the thought of getting eliquid all over it crossed our minds several times) the concept seems to work well with the tank.  As for being a starter kit, I would never advise anyone to get a 150W TC device as their first device, but as a combination kit it works very well.  As a gift for the wife,  it has gone down perfectly and she is begging to get it back so she can actually use it.

A full review will be available soon, so be sure to check back.

As always enjoy your vaporizer and vape safe!