The FDA, Big Pharmaceutical, Big Tobacco, and the Special Interest healthcare groups are sitting back and laughing at vapers right now.  Friendly fire will kill this industry, and I’m going to spend the next minute or two stepping out of my role as a GuideToVaping writer and put my feelings out on the site.

May contain some NSFW language as for this post, the filter is off.

Vapers have had the FDA regulations in front of them for a month now.  They are one-third of the way to Day 90‘s implementation, when the first pieces of the FDA’s plan to crush the industry go into effect.  For some reason however, I am seeing more time, energy, and effort being used by vapers to bash each other, rather than fighting the war. 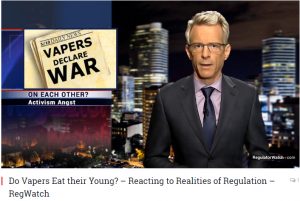 Last week, Brent Stafford of Regulator Watch (a good friend from North of the Border) released a video asking “Do Vapers Eat Their Young?” Reacting To Realities Of Regulation, where he asked many of the US industries lead advocates questions about this subject.

The common thread across all their statements was:

Vapers are scared, there is no question about it.  The majority have gone from being smokers looking for a healthier alternative, found a community that have broken free of the cigarette industries grasp, and thanks to the FDA they are now being forced into political activism to keep their undeniably safer alternative on the shelves.  Fear will make you run for the hills or fight like a demon.  The problem right now is the people on the ground are turning on anything that moves.

Th title of this post, Friendly Fire Will Kill Vaping will make sense to any ex-service members, but may not be a term familiar to many others.  In combat, friendly fire (or as they are now coined blue on blue actions) are unfortunate incidents where members of the same force accidentally rain hell on each other, effectively taking one or all out of the fight.  War requires a great deal of trust.  Trust in the man standing next to you, knowing that if you get in the shit you can make a call and angels will arrive to save your ass.  Believing that the guy holding the map knows which direction he is going in.  There may be many units on the field, but they all respond in unison to the demands of a central control point.  Headquarters says go here and do this, and that is exactly what they do.

No one questions the direction, no one gets on Facebook and calls the general a shady dick, and you sure as shit don’t get the commander of another unit telling the troops that the information they have been given is wrong.

This is not a dig at anyone in particular, but more towards an industry and community as a whole.  If you don’t want to get involved in the fight, stay out-of-the-way and keep your mouth shut.  Second guessing people who are spending every waking hour trying to keep our way of life intact in a public forum will do nothing but cause harm.  If you have a concern with something that someone is doing, reach out to them privately, as we don’t need everyone looking for 15 seconds of fame.

If you’re a business owner, follow the leads you are being given by SFATA and your State organisations to help in the fight, become members, and put money into the pot to keep your businesses alive.  If you are a consumer, make sure you are a member of CASAA and follow the directions that we outlined in an earlier post, 5 things you can do to save vaping.

Attacking each other will do nothing but bring down morale, as more people become dejected fewer people will care enough to fight.

As my good friend Andrew Osborne of SFATA keeps trying to instill, the message #TogetherWinOrLose is probably the most important aspect of this fight you can focus on today.  We are at war and we need to stop doing the enemies job for them.