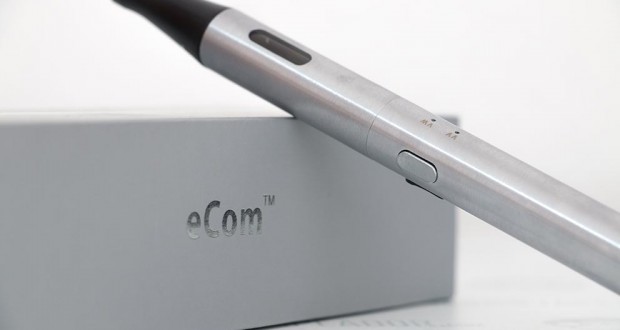 Joyetech has always been viewed as an outstanding company. They’ve created a solid track record for themselves, and have become a legend within the electronic cigarette industry – mostly due to its consistent, inventive and very high quality products. What typically separates Joyetech from the rest of the manufacturers is the quality and always sleek, yet simple design. The latest product – which received a 2014 Red Dot Award for Product Design – follows along the same lines, beautiful, sleek, elegant and simple – all describing the Joyetech eCom.

The Joyetech eCom looks absolutely beautiful. It’s sleek and simple – which describes many of the Joyetech products on the e-cigarette market currently. Joyetech has always went with a “simple” approach, which has worked flawlessly. They don’t over or under design any product, and I believe placing themselves in that medium has continuously kept them as a leading manufacturer of electronic cigarettes. 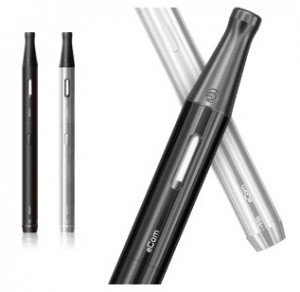 Beyond the top portion of the eCom is the bottom portion – which consists of the battery, battery tube, as well as all the eCom’s internal electronics. Positioned in the middle of the device is a square but rounded corners push button (same button used with the original eVic). To the left of the button and about 3/8″ around the device is a micro USB port that is covered with a black rubber seal. To the right of the button and around the same distance is a print of “VV” and “VW,” with small holes underneath each. The small holes have white LED’s inside them and are used as a specific indication. Located on the bottom of the tube portion of the eCom is a rotatable bottom base that displays 5 selections and increments in between each. Those readings display: 3.3V/4.5W, 3.6V/5.4W, 4.0V/6.7W, 4.4V/8.1W, and 4.8V/9.6W

– In all honesty, it looks as if it’s the Joyetech eGo redesigned, reconfigured, and with a more modern appeal. I like the way the eCom looks, it’s very appealing and I can’t help but to think this device was created to recapture that audience that enjoyed the original eGo so much. Back when the eGo-C Twist was released, it gave the eGo series a breath of fresh air and rejuvenated the eGo’s branding. And now, I feel as if Joyetech revised that same eGo size and reinvented what a medium range device is supposed to look like. I can see why the eCom received such an award for the eCom, because there’s no doubt that this device is a pleasure to look at.

Though the eCom may offer a simple appearance, it isn’t your typical simple device. The eCom has many cosmetic features, as well as advanced functioning features also. Let’s first begin with the cosmetic features of the eCom and then make our way to the functional features.

Cosmetic Features: The eCom makes use of a screw-able mouthpiece instead of a standard 510 drip tip inlet. Though I’m not too pleased with the use of this mouthpiece, it is however necessary for the functional features beneath it. To make up for the mouth piece that comes with the eCom, Joyetech made a small metal piece that screws into the clearomizer and allows the user to insert any 510 drip tip. I love that Joyetech thought of this and it adds to both cosmetic and functional features of the eCom. The transparent sight window located on the clearomizer was a must since it allows the user to view current e-liquid levels. Once the eCom’s button is pressed and activated, a white LED will glow around the edges of the button, letting the user know that the battery is being activated. In addition to indication, both the “VV” and “VW” LED holes light up to indicate which mode the eCom is currently in. The micro USB port that gives the user the ability to charge the device internally is a great feature, but the black rubber seal will get in the way and making you mistaken it for the button – which is a small annoyance. There is an easy solution for this however – which is simply removing the seal completely, but allows dust and debris to enter that port.

Functional Features: After unscrewing the mouthpiece, the necessary functional features become visible. This cap underneath the mouthpiece is where the user would fill the clearomizer with e-liquid. There is a small hole with an indication “Fill,” along with an arrow pointing to the fill hole. On the opposite side of the fill hole is a screw that allows the user to adjust the draw or air. The eCom comes with a special tool that allows you to adjust this screw so that you can place to your liking. Many new high-end clearomizers are just now featuring adjustable airflow, and it’s already available with the eCom. Removing the eCom’s clearomizer from the battery tube portion of the device, the user can remove and replace the 2.4Ohm C2 atomizer head with that same “special tool.”

Continuing, the eCom also comes with variable voltage and variable wattage, which has been separated into two modes. These modes can be switched by pressing the button 5 times to power the device off. Once the device is off, press and hold the button for 1.5 seconds (takes around 3 seconds for me) or more and the indication light will switch to another mode (modes mean variable wattage and variable voltage). Repeat the process to switch back to the previous mode.

– The feel in features of the eCom is very modern. It uses a clearomizer that is very unique and nothing I’ve seen similar within the current market. I like most of its features, especially that it has both variable wattage and variable voltage, as well as being able to switch between the two modes. I also enjoy the use of the adjustable airflow feature and very user-friendly way to refill the clearomizer with e-liquid. However, I wasn’t too thrilled with the way you remove and replace the C2 atomizer head. It’s easier, I grant you that, but became quite the hassle if e-liquid still exists in the clearomizer tank. Let’s just say things got a little messy…

I’ve said it many times, to friends locally and to all of you readers, there is something about these Joyetech atomizer heads that is beyond what the rest of the manufacturers are able to produce. I can honestly use the same e-liquid in both my daily setup and in the eCom, and at the same voltage, and I’ll produce more vapor from the Joyetech atomizer head. I’m puzzled at how they’re able to achieve this and trust me, I’m had many conversations with online vendors to figure it out. Unfortunately, I’m still stumped. Props to you Joyetech… 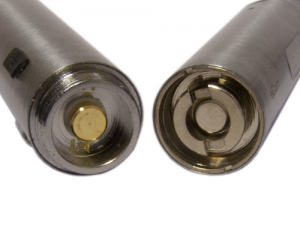 Aside from the large amounts of vapor I’m able to produce from the eCom, the device’s overall performance is great. There is a slight exception however – that of the wicking abilities. The eCom’s clearomizer on start-up wicks exceptionally well, but chain vaping didn’t quite hold up. I often found myself taking a few dry-pulls to reinstate both the flavor and vapor, and that becomes a hassle over a lengthy period of time. The variable voltage and wattage is nice, and it ultimately made this device vapable for me personally. I can some-what deal with the wicking issue because the atomizer head allows me to produce so much vapor, so placing the eCom at a voltage I’m normally using anyways was a huge plus. If I could change one thing about the eCom, it would be the top connection of the battery tube. With the way it’s designed, it doesn’t allow you to use any other clearomizer except for the clearomizer that came and was made for the eCom. Options is a big plus for me, and it defines this industry, so not designing the eCom as a universal battery was a big flaw in my eyes.