The Joyetech eVic AIO may not sound like a brand new device, but the company has just released information that they are giving the old one a face lift and releasing work of art in the form of a box before the August 8th deadline, which is when the market will close for new products.  As soon as Blake and I saw this thing, we were both asking Joyetech to take our money, just from the specifications.  Let’s go ahead and take a second to look over the Joyetech eVic AIO and see what they’re bringing to bear. 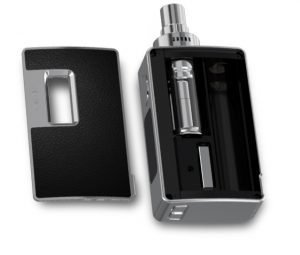 Joyetech has taken this concept from a tube style mod that is working perfectly for new vapers everywhere, and turned it into the biggest, baddest, single 18650 mod it could create!  Measuring in at 105mm by 48mm by 26mm, the stylish compact design will immediately grab your attention.  At first glance you may confuse it with a lesser mod, even with its enormous firing button, 0.96-inch OLED screen that acts as a real-time clock, and textured sides, it seems to be missing something.

The 3.5mL removable glass tank is sunk into the body of the mod with only the removable top cap showing.  There are 5 adjustable airflow slots that have been built into each side for maximum tweak-a-bility of your vaping experience.  Large cut-out windows on either side give you the ability to check the levels of your e-liquid with ease.  Filling and coil changing are done from the top as this is a leak-free design, taking advantage of similar coils that were issued with the older version.

It isn’t until you pick it up or read the specifications that you realize, sunken away inside the base, are the missing components that bring the all new eVic AIO into a league of its own.  Adjustment switches have been placed so that there’s no way you can accidentally change the settings while vaping, and then you realize there is a lot more to this mod than meets the eye.

Taking full advantage of a wide array of coils, the AIO can run in variable wattage, temperature control (Titanium, Stainless Steel or Nickel), Temperature Coefficient of Resistance (TCR) and by-pass modes.  The BF series of coils should give any vaper option’s with this device, whether they are a mouth-to-lung hitters or go with the deep lung inhales.  And, regardless of the type of coil they use, it appears as though Joyetech has everyone covered.

If the tank that comes embedded in the tank still isn’t enough for you, don’t worry.  Joyetech has included an adapter that allows you to fix any RDA or tank to the top of the device using the same connection as the top cap.  If you were so inclined, you could have the reservoir filled with e-liquid, use a tank on top until you got bored with the flavor, then switch out the adapter for the top cap of the device which includes the coil and vape away in seconds!

Is there Anything Else?

The device takes a single replaceable high amp 18650 battery, the firmware is upgradeable, the side is held in place with massive magnets to keep the batteries in place, and you can get a variety of stickers to change the look when you feel like it.

Joyetech eVic AIO: GET IT HERE