KangerTech, a name synonymous with vaping is expanding the Dripbox line with the release of the Dripbox 160.  This starter kit is filled with surprises and over the next couple of minutes we will be taking a look at exactly what it has to offer.  Even if you have no idea what a squonk box is now, by the time we’re done here today you will probably want one.

The basic premise of a squonk box (or squonker) is a vaping mod with a built-in e-liquid storage and release system.  You will generally find a refillable bottle secured inside the body of the box, which has a tube that feeds directly to the coils through a specially designed 510 connection.  When it’s written down, they sound complicated and potentially messy, but in reality, a well made squonk setup can work perfectly. 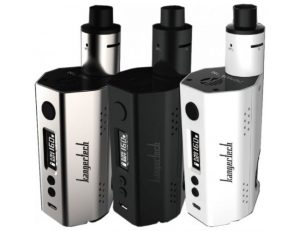 KangerTech’s known as trend setters, they’ve created the massive surge that turned into the affordable Sub-Tank market, and earlier this year released their first take on the squonker, the 60 watt Dripbox.  While the 60 watts capabilities were limited, it set the stage for bigger and better things.  The concept was solid, it was just a case that vapers had come to expect more from their devices.

The Dripbox 160 is a dual high drain 18650 powered device, as you would expect.  It fires the coils between 7 and 160 watts in variable wattage mode or can be switched over to Temperature Control to take advantage of Stainless Steel, Ni200, or Titanium coil sets.  The Temperature Control Range is 100 – 315°C (200 – 600°F) and has been widely adopted by vapers to help prevent dry hits in the tank by monitoring the status of the build.

The board comes equipped with low battery indication, low resistance protection, and high temperature protection.  While the device comes with a micro-usb port for charging, the manufacturers (and we here at GuideToVaping) recommend external charging.  At 4-3/4″ x 2″ x 1″ the Dripbox is not a small device, but when you consider how much room is taken up by what makes it unique, you will let that slide.  It’s been compared to a Reuleaux with a missing battery bay, but the use of space on an established design really does make sense. 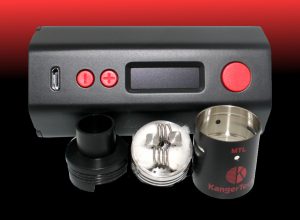 How much e-liquid can you store inside an 18650?  Judging by the Dripbox’s innovation, I would say around 7ml, as that is the size of the refillable squonker bottle secreted inside the case.  Remove it to refill it, put the hose in the hole and you are ready to go. Pressing the exposed section of the bottle will fire e-liquid straight up the tube and onto the deck — no more reason to drip while you drive (which you shouldn’t be doing anyway as it’s not safe),  and over saturating the deck should be a thing of the past.

The Subdrip RBA (or as I like to call it: the deck with the hole) is 22mm in diameter and the bottom feeding design takes great advantage of a Velocity style deck.  The 2-post system allows the e-liquid to flow up freely between the uprights and get to the wicks without too much interference.

KangerTech has provided 2x o.2Ω Dripcoils with the package to start you off on your adventure with the Dripbox, but this whole system was designed to help you on the journey to building on your own. 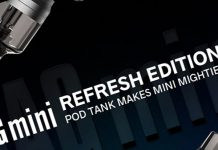 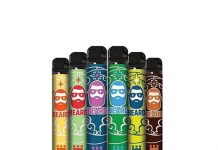 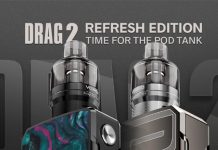