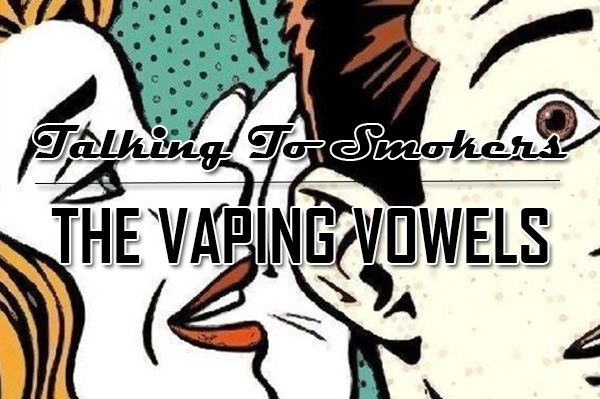 Talking to smokers: The vaping vowels is a fresh look at helping smokers switch to e-cigarettes.

Dr. Christopher Russell presented the results of the ‘Vapers Helping Smokers’ survey at the VapExpo Paris on September 20th, 2015.  In his presentation, Dr. Russell talks about the potential public health benefit of connecting smokers who want to quit and are curious about using an e-cigarette with vapers who have quit smoking since they started vaping regularly, and are passionate about helping smokers to achieve what they themselves have achieved.  At the beginning of his presentation, he brought up a very interesting point of view he called the “vaping vowels”.  As a clinical psychologist, he uses this method with regards to many different subjects, but it fits perfectly into our world as we try to bring more smokers into our fold.  When a smoker comes to a vape shop or talks to a vaper, there are certain things they are looking for without realizing it.

The smoker is looking for advice on many things:

Think back to the beginning of your own vaping journey, what was the advice you sought out.  Did you want to know what was the best sub tank and temperature control box combination or did you want to know how to put the cigarettes down for good.  If I am talking to a smoker, I still suggest they go with an eGo style battery and small tank with a tighter draw, because they are looking for something that simulates smoking – not creating cumulonimbus clouds.  After a while, when they start going down the path of not being “as satisfied” with their setups, I may suggest going for something a little bigger.  Think about things from their perspective, not your expectations.

We would honestly get no where in life without encouragement.  Imagine if as a child no one had made you feel good about using the potty… or brushing your teeth.  What I am getting at is that as we grow older we forget about offering praise to other adults for achieving a goal, most of us forget about being positive altogether (I am including myself in that by the way).  We have developed a community, online and in shops where we can offer encouragement to each other and that is why so many of us succeed, but at the same time a lot of these avenues are now being used to ridicule those that we feel aren’t “up to our level”.  I was told a long time ago, if you don’t have anything nice to say, stay silent – a message that is sadly lost on so many today.  If a new vaper / current smoker asks for advice on Facebook, offer advice but keep the trolling to yourself.  That person you just ridiculed has now gone back to cigarettes because you were a douche.

Several years of disinformation from Governments and Big Corporations are hitting the vaping industry hard.  A recent study showed almost 90% of non smokers and 70% of smokers believed that e-cigarettes were as dangerous, if not more dangerous than combustible tobacco.  As vaping advocates, it is our job to provide people with accurate and truthful information.  We need to be able to show people where the lies (which is what they are) come from and why they are there.  The smokers also want more practical information from us as thy progress along their journey.  For me, information is the most powerful tool we have in our arsenal.

Simple requests that are currently under attack almost every where we look.  With Governments buying wholesale into the disinformation campaigns that are being waged, we are already seeing bans being put into place in certain areas around the world.  As Europe is about to embrace one of the largest scientific and public health faux pas in human history, we are going to see less opportunity for people to get away from cigarettes, because the tools that are successful are about to be taken away and locked in the drawer.  It is every vapers responsibility to make sure that these tools are in place, all the flavors and all the devices, until well after every single cigarette on the Earth is gone.

We should all get this.  We were all in their shoes at one point in time, and I for one remember those feelings.  I enjoyed smoking and in all honesty didn’t want to quit, mainly because of fear.  We, and by we I mean everyone, vaper, smoker and non smoker alike, need to get behind those making the switch and make them feel as though we get what they are going through.

Five simple letters, attached to ideas can be very powerful.  I know that going forward, when talking to people who are considering giving up cigarettes, I will use the Vowels as a template to help people break free of the chains that tobacco has held them in for so long.  It is our job, as vapers and representatives of the vaping industry to hold out a hand and help where we can, and I believe our job has just been made easier.