It was not long ago that I shared an article under our Product Watch category telling you that Joyetech would soon release a new eVic version 2. On April 18th, 2014 – Joyetech released a company news post announcing that they will be launching a new generation intelligent product in the month of April – the eVic Supreme. 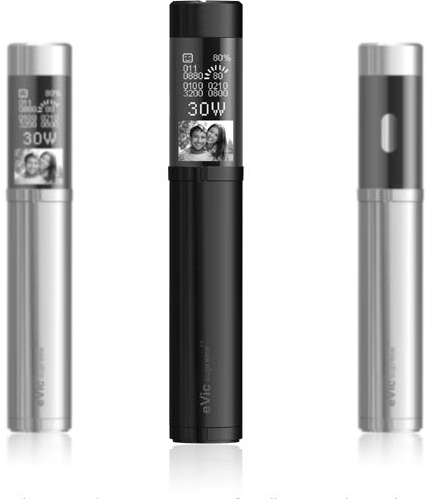 eVic supreme not only inherits all the best features from Joyetech eVic, but also is endowed with its own characteristics.

The suggested retail price for the eVic Supreme will be $159.00 – which is about $55.00 more than the original eVic’s average retail price.

The new eVic has almost the same appearance other than the taller control head that allows a taller display screen and the top cap being shorted and more squared off. Somehow, Joyetech can produce devices like this, very simple and sleek, and it becomes a leading product on the electronic cigarette market. It’s like they do this with little effort and gain amazing results. 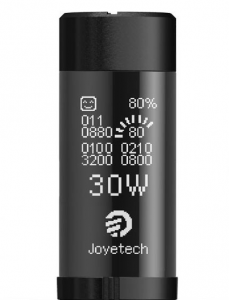 Though the eVic Supreme looks some-what similar, it’s quite a bit different from the original in terms of electronics. The new maximum output wattage goes all the way up to 30 watts, something you’ll only see in devices that cost $150 and above on the market. Its voltage has been raised too, of course – reaching a maximum output of 6 volts. The new eVic also supports 0.5Ohm to 5.0Ohm – something I’m sure will pend will to those of you who cloud chase.

The Supreme has a new feature which will allow the user to upload pictures to the device. With this feature, the user will be able to view the pictures on the device on a clear and delicate OLED display screen (adopts 0.96 -inch, 64 x 128 pixels) and “16 grade gray function” that makes viewing photos on the Supreme very clear. The user will be able to upload the pictures to the device with a new MyVapors PC Software.

Uploading photos on your e-cig isn’t exactly necessary, but it is pretty nifty and it doesn’t take up any more room by incorporating the new feature. No matter how you feel about this new feature, it definitely deserves some “cool points” in the least. Agreed? 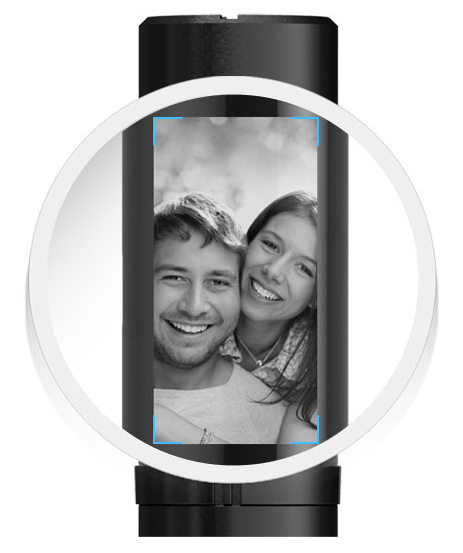 With this new Supreme version of the eVic, Joyetech has released a new UI for the PC Software – which is something that was definitely needed and will come as a big plus for this device. The MyVapors software we have all grown used to look outdated and seemed like it was lacking it the developmental design category. And, we all know design is one of Joyetech’s strong points.

Breaking down the eVic Supreme there are only two very noticeable differences – the taller control head as we already covered and the top connector that sits on the control head. The top connector uses the same design that can be seen on the Joyetech eCom. And, to make a 510 connection that is universal with the majority of the e-cigarette market, they’ve included a 510 eGo compatible “connect ring” that screws onto the connector that is positioned on the control head. This new connect ring is said to “improve the strength of device and the reliability of use.” – I don’t know the specifics, but I believe it means that it will allow users to make a better and more reliable connection between the attachment used and the eVic device.

In addition, Joyetech has made the battery tube, battery bottom cap, direction key and connect cover all stainless steel to add to the eVic Supreme’s durability.

As you can see, there are some new changes in what displays on the eVic’s screen. 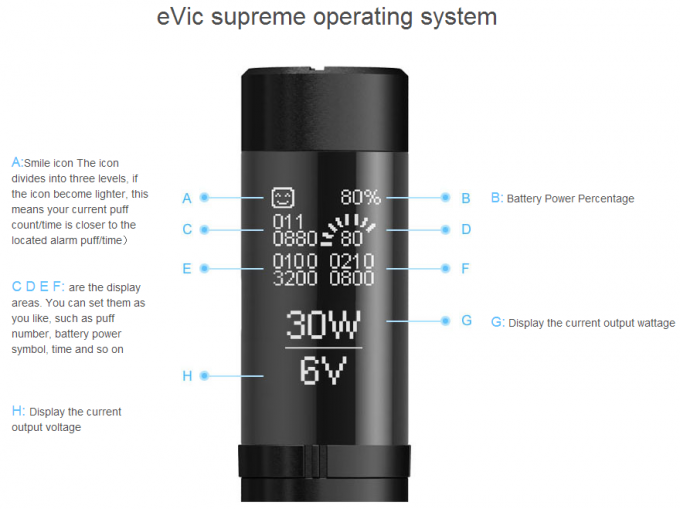 Here are some of the features that can be expected with the New eVic Supreme advanced personal vaporizer:

The eVic comes in at 23.0mm in diameter and 139mm in length. That’s 15mm taller than the original eVic – which was already a pretty lengthy device. I’m not quite sure how I’ll feel about this, but after using it, it may not pose as much of a problem as I’m thinking.

The eVic will come with 1 rechargable battery. The 2100mAh lithium battery is a SONY US18650VTC4 that has high-safety, extra-large capacity, and high-stability.