The Notch Coil is a recent, ground breaking innovation from Joyetech that could change the face of vaping forever.  Quickly seized upon by Jay-Bo and Wismec, and sent out with their Theorem Atomizers, the world got their first taste of this new technology.

We are going to spend the next minute or two looking at the latest twist on the coil highway, discussing the specifications, the pro’s, the con’s, and deciding if we are ready to drop the wire and pick up the tube. 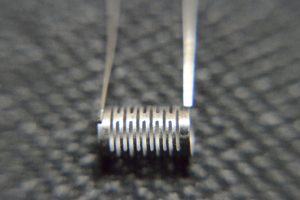 I remember watching Jay-Bo’s video for the Theorem (with Matt from Suck My Mod) as he first introduced the Notch Coil to the world.  My general thought process immediately turned to “Why didn’t I think of that?” before considering the ramifications of the innovation going forward.

If you haven’t had the chance to see one up close and personal yet, let me take a second to give you the specifications.  You basically have a 5.5mm inner diameter stainless steel tube that’s had various sections removed to create massive surface area while keeping the amount of metal used to a bare minimum.  If you attempted to roll a coil in this fashion, spaced or otherwise, you would probably fail to get the resistance and surface area so perfectly balanced.  Welded to the ends of the tube are 2 non-resistant nickel leads, designed and placed in such a way to simplify the process of attaching them to your deck.

Let’s start with the fact that you no longer have to roll coils.  This design can be put into any RDA/RTA that you own and immediately begin working its magic.  The 0.23Ω coil will fire at lower wattage than we have become used to, and it will produce massive amounts of vapor in the process.  Using the Notch I was able to cut my power consumption in half while still getting a satisfying vape.

The massive 5.5mm inner diameter means that, while the wicks will suck up the e-liquid like it’s going out of fashion, your chances of getting a dry hit are slim to none.  By having such a great inner surface area, and more cotton inside, your wicks have to work less to keep the supply running.  Did we mention that you can use this coil in regular wattage mods AND temperature control Stainless Steel mode?  As more and more vapers seem to be moving away from wattage, why not have a coil that can run under both umbrellas.

As with anything in this life nothing is perfect, and the notch coil has its flaws.  The first problem that was found was during the re-wicking process (my first Notch was pre-installed in a Theorem), if you dry burn the coil to remove crud, make sure you do it at low heat.  Having it turned up too high will immediately melt the coil.  In the same breath, if you have damaged the Notch in any way, (such as bending part of the coil itself) just go ahead and throw it in the trash can, because you will get nothing but dry hits from that hot-spot. 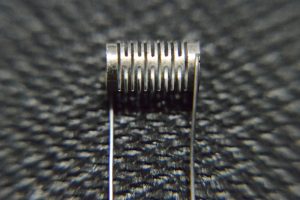 The next problem is the leads, more to the point the welds that hold them in place.  After using several, and receiving information from a number of friends who have also used them, a common thread is popping up.  The joints between the coil and its legs seem to be the weak spot, and a sudden move can result in a useless coil.  Add to it that the current limited availability of the coils in the marketplace and you could quickly be returning to the ranks of the winders.