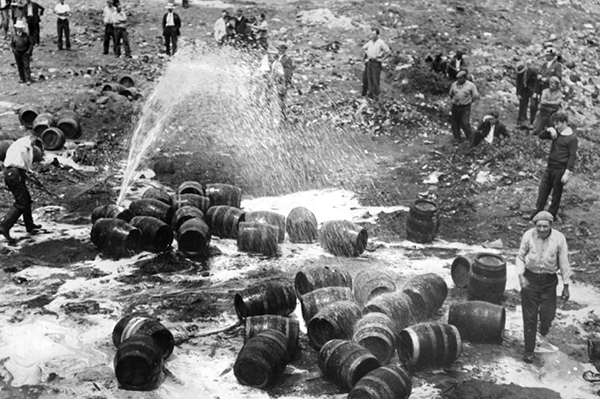 The Vaping Prohibitionist movement is real and while they may temporarily feel as though they have the upper hand, history has shown us that they are coming at what they see as a problem in the wrong direction.

More than half of the people who are screaming about the evils of vaping are in reality nothing more than misinformed.  There is so much anti vaping propaganda being published on a weekly basis that we can not, in all honesty blame, the majority of the general public of their distrust for the vaping industry.  They are constantly bombarded by the same pieces of junk science over and over again, when someone has an accident with a vaping device it is instantly front page news.  We have to start to steer the discussion away from negativity that the opponents of vaping wish to fill the news feed with.  The truth is that vaping is 95-99.9% safer than smoking combustible tobacco, a number agreed on by the British Government’s Public Health England report earlier this year.  We have health professionals at the local level in the USA encouraging their patients to make the switch to Electronic Nicotine Delivery Systems (E.N.D.S is Government talk for vaping devices) as they are seeing more and more evidence that these things do what they are advertised to do: reduce or eliminate the use of combustible tobacco products.  According to the CDC, there are currently 9 million adult users of E.N.D.S. in the United States alone and if the Prohibitionists get their way, that is probably 9 million adults who will return to smoking over night.

We Are Not Talking About An Out Right Ban

The people who the vaping industry are fighting against are too clever to call for an out right ban on products, as special interest groups and politicians they will use sneaky tactics to squeeze the industry into submission, if not entirely out of existence.  The FDA are planning to take control of the entire industry, not just the e-liquids but every component of the devices used for vaping ( which includes cotton wool and batteries) and declare that they are  all deemed as Tobacco products, which gives them the opportunity to get their hands on to every aspect of the industry.  The world of E.N.D.S is very fast paced, as far as product development and enhancement goes and in the last 2 years this industry has boomed beyond recognition.  The devices on the market today are closing in on what could be the “final product” as far as what the consumers are looking for.  The FDA, in its wisdom, are looking to remove these life saving devices from the market because they weren’t in existence in 2007.  As a reference point, in 2007, the only things you could buy were cigalikes from the gas station (that do not work) and modified flashlights.  The makers of these devices, as well as the e-liquids would then have to submit a lengthy piece of red tape to have their products approved for the market.  That doesn’t seem to be a big deal, until you read the fine print that demands that for each e-liquid/device, there will be a price tag in the millions of dollars just to submit the paperwork.  A great many of the companies that will be subjected to these regulations are not multinational conglomerates who can afford 1 of these forms.  Each of these companies will have to submit dozens of them, just because of the way it will be set up.

The Government steps in and implements a ban on anything, be it alcohol or drugs, the black market swells.  If there is a demand, there are people who will find a way to fill that void with the  products being sought after.  The early 20th century saw the rise of organised crime because the government thought it knew best when it came to booze.  No one stopped drinking, but some very bad men got rich because they were the only people who could fill the void.  Same goes with the narcotic culture that has plagued humanity for the last century, there are people currently serving longer sentences for selling marijuana than bank robbers.  Prohibition has never worked throughout history, why would it suddenly start now.  As long as we do not learn from history, we have no way of making sure we don’t make the same mistakes again.

As I previously stated, these devices are actually the solution to a problem they have been trying to solve for years.  They are making people quit smoking, period.  These devices have, in essence, allowed smoker to carry on with their nicotine addiction without the plethora of harmful side effects that go hand in hand with combustible tobacco products.  Despite popular belief, it isn’t the nicotine in cigarettes that is harmful, if it were they would have already banned tomatoes, egg plants and all other members of the nightshade family from sale in the grocery stores.  Nicotine isn’t actually very addictive, in fact no more addictive than caffeine,  but smokers can not break free of the grip of those little white sticks.  SHOCK SCIENCE TIME:  it is, in  fact the other several thousands of chemicals that keep you hooked and the hand to mouth action that becomes repetitive and habitual in your mind.  Unfortunately, the tobacco companies and pharmaceutical companies have the government so invested in the cycle of smoke, try to quit, fail and start again that they stand to lose too much money to vaping.  They do not want vaping to disappear because it is harmful to the public, but because it takes away from the profits and taxation afforded by smoking.  The only people who would be able to afford those pieces of paper I talked about earlier are the very people who smokers are breaking away from.

How Can We Fix This

Firstly, we have to get into the mindset that vaping isn’t  a problem, it is in fact a solution.  Despite the posturing of its opponents calling vaping a gateway to smoking, the truth is they have it backwards.  We hear that children are starting to vape in droves, when in reality the majority of those “children” who regularly use E.N.D.S. were in fact already hooked on combustible tobacco.   To a non smoker, vaping looks bad, because it reminds them of smoking.  In reality, the vapor that they see has been proven to contain less particulate matter than the “fresh air” in the room around them, but once again the misinformation has them believing they are sucking in noxious fumes that are seconds away from making their heads explode.  If they have no dog in this fight, they truly have no idea about its benefits but have been pre programmed to stand against it.  If the vaping industry took the time to educate the non smoking general public about why it is there, their out look may become different.  If the vaping industry want to survive it needs its biggest proponents to be on the outside looking in.  We need those, who stand up in senate hearing against vaping to open their eyes and see the bigger picture than their own grant money for the next year, we need them to truly care about public health.

While I may write about the vaping industry, the products, the people and what is going on in the world, I am one of the hundreds of thousands who have been able to quash a tobacco habit that I thought would take me to my grave.  From 2 packs a day to nothing thanks to vaping, I feel as though it is my duty to keep this industry alive in its current form for all the people who have not discovered it yet.  It worked for me, my better half and so many people that we know that we got involved heavily in the online community and many others with similar stories and experiences.  Our community, while growing every day is still minuscule in comparison with the general population.  As a tiny subset, we have a small voice that is rarely heard over the clamor of our opponents and this is something we need to change.  The more people we have fighting against prohibition, the more lives we will be able to change.