After a highly successful run with the unregulated Pulse BF Box Mod, Vandy Vape introduces its next edition, the regulated Vandy Vape Pulse BF 80W Box Mod! It adopts many of the same great features found in the original version, such as the food-grade 7ML squonk bottle, the capability of housing a single 18650 battery, and the same compact design that many vapers have come to enjoy. However, this new Pulse BF 80W Mod now boasts a high-performance chipset capable of delivering heavy hitting power consistently. Continue reading and learn more about the all new Pulse BF 80W Box Mod by Vandy Vape. 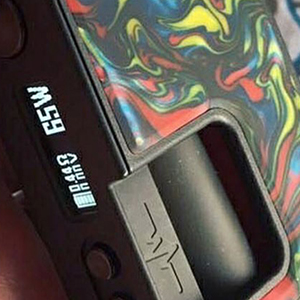 Users all over the world were stunned when Vandy Vape released its unregulated Pulse BF Box Mod. The mod and the brand behind it gained tons of success in this collaborated device between both Vandy Vape and Tony Brittan from the Vapor Trail Channel on YouTube. ‘Tony B’ as he calls himself, is a YouTube reality that has had his hand in the creation of various products, from mods and atomizer to e-liquid. This collab between the two jumped off with the Pulse Mod, and due to its rapid popularity, the Pulse BF 80W Box Mod was developed.

The new Vandy Vape Pulse BF 80W Mod offers the same compact size and form factor as the original, not straying too far from the design has many flock to the squonk market. While the Pulse BF 80W maintains its minimalistic size, its design changed slightly as far as appearance. It now features magnetic door panels that have a multi-colored design and the same fitment as the original. What’s most impressive about this device is that it’s now regulated, meaning it’s powered by a high-performance chipset capable of delivering a lot of power. Utilizing the Gene Chipset, the same chip that powers the popular VooPoo Drag Mod, this regulated Pulse now delivers a whopping 80 watts that’s now controlled via a 3-button control face and an OLED display screen positioned on the side of the device. Like the original, the Pulse BF 80W Mod houses a 7ML silicone squonk bottle and will work exceptionally well with any bottom-feeding atomizer that is attached to it. For power, this mod has the capability of housing a single 20700 battery or a single 18650 battery with the help of a 18650 battery adapter that comes included.

While we’re writing this preview we have limited information available for the Pulse BF 80W Box Mod by Vandy Vape. The mod and its limited information were just released, so please use patience as we continue to collect more information on this new and exciting mod. Although our information is limited greatly, this is what we know and can safely assume:

The Pulse 80W Box Mod will be available in five different color options. The mod first made its debut at ECC Ontario 2018 in Ontario, California. It’s said to release somewhere at the end of the Chinese New Year, so roughly at the end of this month (February). Tony Brittan himself says the mod will be retailed between $60-$75. While it isn’t capable of 157W like the Drag Mod due to its single battery configuration, it does use the Gene Chip, so we can safely assume that the Pulse BF 80W Mod will offer many of the same features found with the Drag Mod, such as Smart VW Mode, 5-Bank Memory, Temperature Control, Firmware Upgradeable, Custom Logo, and a 0.05ohm minimum resistance.