The Vaporesso Estoc Tank Mega of course can deliver a better performance than your average sub-ohm tank, and that’s partially due to its ability to consistently wick e-liquid and produce a good amount of vapor.  However, it’ll take more than that for me to say it’s good or receive my recommendation.  With that said, I wasn’t too pleased with this offering from Vaporesso, but I still wanted to review it so that you know my exact thoughts. 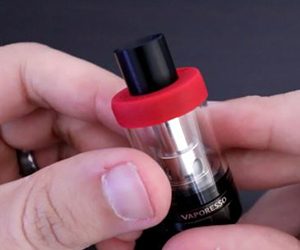 Appearance: The Estoc Tank Mega by Vaporesso has a simple look, nothing flashy, and it’s overall pleasing to look at when compared to others.  It starts off with a wide bore drip tip at the top, a top base that’s been designed for an easy grip, then there is pyrex glass, which rests on top of the bottom base.

As I’ve said plenty of times throughout my reviews, the looks do not have to be extravagant for me, just as long as the performance is top-notch.  With this tank, there isn’t anything super exciting about its looks, so it’ll have to deliver that wow factor to make up for the lacking charm. 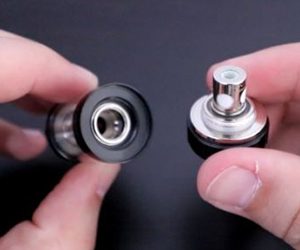 Features: Vaporesso was sure that this tank would be a hit with features like its Eco Universal Coil (EUC), which allows you to replace only the core of the atomizer by dropping it in and out of its metal sleeve.  What I’m confused about though is that there is still a metal sleeve or casing around the coil itself, so there isn’t really a difference between this design and any other sub-ohm tank.

Another feature that the Estoc Tank Mega has is a easy coil replacement system, where that atomizer isn’t screwed in, just merely inserted in its place and silicone grommets holding it in place.  I don’t like this design, and would prefer my coil heads be screwed into that bottom base.  This tank also has an included glass adapter that allows the tank to hold up to 4mL’s of e-liquid or 2mL for a smaller size.  And the last notable feature other than the delrin drip tip that’s included is the easy top fill design and its bottom airflow control, which both work flawlessly. 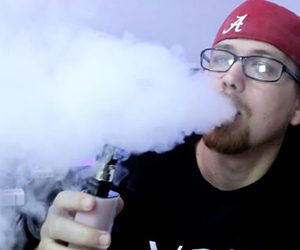 Performance: As far as the performance goes with this tank, it delivers a hefty amount of vapor, which I couldn’t complain about, but the flavor wasn’t the best in the world.

The airflow was perfect, and it even wicked e-liquid consistently, but I’m not quite sure I can get over the odd coil design, nor the hype surrounded by a coil design that is no different from any other, but is marketed so.

All in all, the Vaporesso Estoc Tank Mega isn't really a bad buy, but it definitely isn't something I would recommend. It offers a nice vapor production, a nice hit, good airflow, but the flavor lacks just a tad bit. What struck me wrong with this tank is that they hyped the internal design of this tank and used that to market it, yet in reality it isn't any different from any other tank, other than the way you insert/replace the coil -- and I wasn't a fan of that either. You make your own call, but for me, it's a no go.