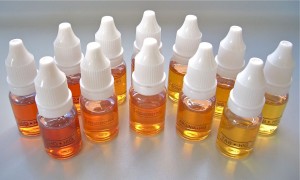 So, let’s talk about your liquids for a moment. Do you know what it is that you are smoking on a regular basis? Because a lot of smokers don’t actually have a clue what’s in the liquids – they just taste nice and make big clouds.

Now, what you just think about is that your average e-liquid is actually made up of four different things. What are these things, you may ask? Well, that’s not too difficult to explain, but there must be some dramatic flair to it, you know?

Now then, let’s get down to business. We’ll be taking a look at the four main substances of an e-liquid, and taking you on a journey through each of them.

The first ingredient which you will find in any type of e-liquid is propylene glycol. This is something that is made in a lab and is safe for use in food and cosmetics, as well as drugs.

It’s pretty safe. It’s one of the base substances for an e-liquid, so in that respect, you’ve got plenty of options with regards to what you do and when.

The ratio of PG to VG in a given e-liquid will depend upon the type of provider that is making it as well as what it’s been made for.

Another key component in the whole mix is vegetable glycerin, known to many as VG. This is something that has no color or taste. So what makes it so important? Well, it’s found in a lot of stuff, like food products, and is viewed as safe.

Functionally, this is what helps to contain the flavoring, because it has no color and odor of its own, it’s used for other things like preserving and trapping flavor.

Ah, see, now we’re getting into the good stuff when it comes to e-cigs. This is the bit where most people sit up and pay attention because we are going to be talking about flavorings.

You do have quite a lot of flavoring options here, some of which are made with real juices, others that are made with chemicals that carefully replicate the taste. Any provider in the UK is held to an exceptionally high standard when it comes to creating products, so they will be safe to use.

Alright, now we have to talk about nicotine. Nicotine is an addictive substance that comes from normal cigarettes, and the reason why people smoke them even though they are harmful to overall health.

However, we must state that it is not the nicotine itself that is harmful. That is a very common misconception. People believe that nicotine is what is damaging to people, but instead, it is the tobacco that comes from normal cigarettes. Nicotine itself, while addictive, is not harmful to the human body in sensible doses.

At the end of the day, people are free to add in as much or as little nicotine to their e-liquid as they like. Many providers of the various strengths of liquid according to what is allowed in each country by law, and you can adjust this yourself by restricting the amount that you use, or using a liquid that has a lower concentration of nicotine in it.

It is fundamentally up to you, and you do have multiple choices in this regard. The liquid itself has been designed for multiple uses and is very easy to work with. For those people who are searching for a more powerful and fast-acting relief, nicotine salts do exist, but they are entirely different beasts and cannot be smoked like normal e-cigarettes.

So, as you have probably been able to work out for yourself, there is quite a lot to do. All of these different types of liquids are built using these for ingredients. You don’t have to worry about anything else being snuck in, because it literally doesn’t get any more simple than this.

The only thing that people need to particularly watch out for if you could even call it that, is the mixture of PG to VG.

This can affect the overall level of sickness and sophistication of your liquids, so it’s important to keep an eye on this for your preferences.

Functionally, there is quite an amazing number of variations that can come from just four different liquids. It’s easy to see why so many people are interested in the fascinating world of e-liquids.

A lot of people worry that there’s secretly something wrong in these liquids because people are so worried. The truth is that there’s really nothing scary inside liquids that you need to be worried about in the conventional sense.

It is generally pretty accepted that e-liquids are a good idea for anyone looking to experiment with a new way of doing things. Why is this the case? Well, it’s got a lot to do with how we look at things, what this means for overall levels of enjoyment, that sort of thing. Functionally, e-liquids do play a vital role in undoing a lot of the damage caused by normal cigarettes. There are not masses in them which is harmful but it’s also easy to see why people get strange when it comes to using them.

What you have to realize is that even though there are numerous options and choices, you need to take the time to experiment with what is on offer. You’ve got a lot of options when it comes to how you do things and the way that you approach many different things. We make sure to only offer you the best liquids possible, so in that respect, you don’t have to worry too much about what is on offer.