In this series of posts, we’re going to be answering the questions that readers have been asking.  Though we may not be able to give you the answer of life or give you the best advice for your relationship, we have the vaping thing covered.  So please, feel free to contact us at anytime with your vape related questions.

An email from a reader asked :

Why do most vapers take direct lung hits, rather than vaping like they smoked?

I am actually shocked to read back through the website and see that this is a subject we haven’t already covered — it is one of the questions asked by so many people who take up vaping in the first few days.  I talk about lung hits and mouth to lung hits all the time, but have never taken the time to explain why some choose one method of vaping over another.

No need to kick back and grab popcorn, this is going to be a short, but very important one.

There is no need to go into great detail about the two as they are pretty self-explanatory.  With a mouth to lung hit, you inhale the vapor into your mouth and hold it before sucking it down into your lungs.  If you were a long time smoker, as I was when I first started vaping, this habit is well-known and practiced as you have probably been doing it for years.

The lung hit is as simple as putting the mod between your lips and sucking the vapor into the pit of your stomach in one fell swoop, creating massive clouds on the out stroke and becoming your own personal fog machine.

I Can Not Take A Mouth To Lung Hit 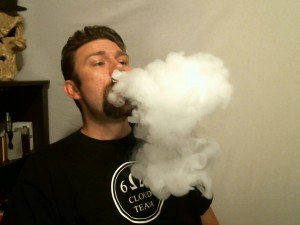 There, I said it, it is out in the open.  Even though I smoked for 20+ years, the act of holding vapor in the back of my throat on the way down makes me cough: and I have been vaping for 2 years.  It’s the same reason for a great number of vapers, as soon as they close down the airflow and the vape catches in the back of the throat, the coughing starts.

It was once known as the “newbie choke”, pay attention to almost anyone’s first few hits of a vape mod and it will happen.  The reason many people turn up the airflow and aim to suck the vapor down is simply the fact that they cease to get the throat itch.

Tell the exact same vaper to try to pull it into their lungs in one go and the throat itch stops, plain and simple.  Many vapers learn the direct lung hit simply to get past the choking sensation and, afterwards, just never go back.

What Causes the Mouth To Lung Choke 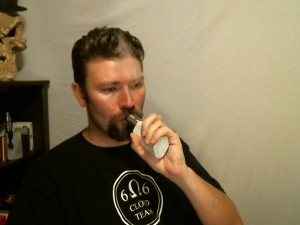 For a few people, it may be a reaction to the Propylene Glycol in e-liquid that causes this choking sensation.  Higher Vegetable Glycerin vapes will ease that particular problem very quickly, but the rest of us are left scratching our heads as to why we have that particular reaction.  It has no actual scientific backing to give us a reason for it, other than psychosomatic.

Most people think they are going to choke on vaper, therefore they do.  It sounds like something my shrink would say, but it makes perfect sense, rather than breathing normally we are telling our throat muscles to catch a ghost, and in the process end up telling ourselves we are potentially in danger of drowning.

Simply put, the direct lung hit is to combat the “newbie choke” and many vapers just never get away from it.  To prove a point to myself, I just turned the airflow down on my mod and attempted to mouth hit my monster, and now I have to clean the spit off my screen.  I know the vapor will not cause me damage or pain, but the simple act of putting thought into the vaping process still gets me every time, just as it does with many thousands of my fellow vapee’s.