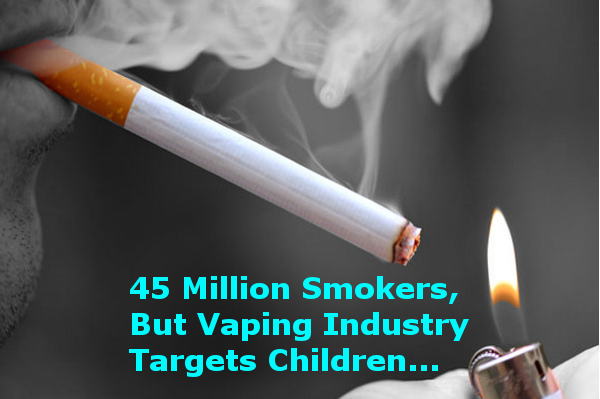 There are currently 45 million adults smokers in the United States, but according to the majority of anti-vaping advocates and government officials, this industry is targeting children.  Vaping, or the use of electronic cigarettes, is booming amongst smokers and those who have recently quit.  At this moment in time, 9 million Americans are using these devices on a regular basis, not necessarily as a smoking cessation tool but as an option to greatly reduce the harm caused by combustible tobacco, while still getting the nicotine they want.  While some see this as a new and exciting opportunity to essentially eradicate smoking related illness and death, there appears to be a block in the road of progress.

Cigarettes have a bad name, and rightly so.  They have been the cause of countless deaths, whether directly or indirectly, and over the course of the last half century, the majority of people have seen them for what they truly are.  We are currently seeing a historic decline in the rates at which people are picking up the habit and more importantly at which they are walking away from tobacco use.  There is a massive community of people who have used vaping / electronic nicotine delivery systems to help them get away from combustible tobacco / smoking and the number of people drawn to these devices is growing daily.  As long as there are people smoking cigarettes this industry has a ready-made target audience, according to the CDC 45 million people who could potentially pick up these products tomorrow.

Each and every day, we see news stories of political groups or health care advocates claiming to be fighting to keep children tobacco free, an act that I personally applaud as a life long smoker who wishes that 25 years ago I had listened to the smokers in my life who told me never to start but for some reason they have decided that now is the time  to attack the dressing, rather than the festering wound.

Over the course of the last weekend,  New York City officials held an anti-e-cigarette rally, decrying the industry for its attempts to pull in the younger generation by “using the playbook the tobacco industry used for decades”.
According to Public Advocate Letitia James, “E-cig marketing is seductive, reeling in children with enticing flavors like Peach Breeze and vanilla and chocolate,” and she, along with others there believe that the industry should be nailed into the same coffin as cigarettes.

While it is true that children like sweet flavors and bright signs, so do adults.  While they fixate on the fact that teens are allegedly running out to stores and picking up these products in droves, they fail to mention that the numbers that they so frequently throw around the room only tell a very small portion of the overall story.  The fact that these teens were predominantly former smokers escapes their attention, the number of never smokers to pick up these devices on a regular basis making up less than one-half of 1 percent should be a cause for great joy, but this is not the message they want to put across.

If you ask the owner of any company that creates e-liquid or the variety of devices that are used for the delivery of their nicotine or nicotine free solutions, they will all strongly disagree with the notion that they are targeting children.  If you include the 9 million people in the United States already using their products, when paired with the CDC’s estimation of 45 million still smoking, their target market is huge.  The majority of these companies have nothing at all to do with the tobacco industry, other than the cig a likes you see in the convenience stores, most of the producers are ex-smokers on a mission to help everyone else quit.  With so much readily available revenue waiting to be tapped into, why would anyone put their company or industry at risk by pulling in the wrath of the establishment.  The concept of adults liking flavors seems alien to politicians.  The industry knows that the majority of adults want nothing to do with the tobacco or menthol flavors that remind them of the cigarettes they were addicted to for so long.  As for the idea of advertising to the younger generation, even though the majority of these companies do not put their products on the television or in magazines, the industry takes great care to make sure that its products are aimed towards the adults they wish to purchase them.  The few companies that attempt to use what would be considered as inappropriate advertising methods are generally asked to change their ways by the trade associations and advocacy groups within the industry as this is not the impression that the industry wishes to portray.

By stating that there is no difference between the products, these officials are actually creating more harm than good.  One product contains thousands of toxic chemicals that are known to cause a plethora of dangerous side effects when set on fire and the other merely looks like it.  From the dawn of tobacco harm reduction, a simple statement has been all but forgotten.  In 1976, Professor Michael Russell wrote: “People smoke for nicotine but they die from the tar” and, in the beginning, people understood that nicotine was not the problem as far as smoking was concerned.  Nicotine is as harmful in small doses as caffeine, and until they actually do due diligence, politicians will be making the wrong calls on this industry.  Rather than research, the prohibitionists have developed the notion that nicotine in itself is the biggest problem with smoking.  They have forgotten that the fight was for tobacco harm reduction, not the prohibition of the use of nicotine.  While one of these products has been lauded in the United Kingdom as the greatest breakthrough in public health in generations, we are stuck in a mindset that will see adults die to make the political elite believe they have done some good in the world.

If politicians were serious about their claims of wishing to eradicate tobacco use and protecting future generations from its grasp, they would outlaw its use entirely.  As it stands, most politicians who are calling for vaping to be classified as smoking, deeming it a tobacco product are doing it for disingenuous reasons.  By having the public believe that vaping is smoking, they are setting up an arena in which they can apply sin taxes to these devices.  At the end of the day, the only reason they are really fighting against vaping is to claw back the revenue they are losing from cigarette sales.  They fought for so long and hard against smoking that the money that has funded them for so long has all but disappeared, not just for the government but for the health advocacy groups and research facilities that have been living off money from the very people they claim to fight.  The reason the vaping industry is targeting children is because that is EXACTLY what the government needs you to believe so they can tax it.