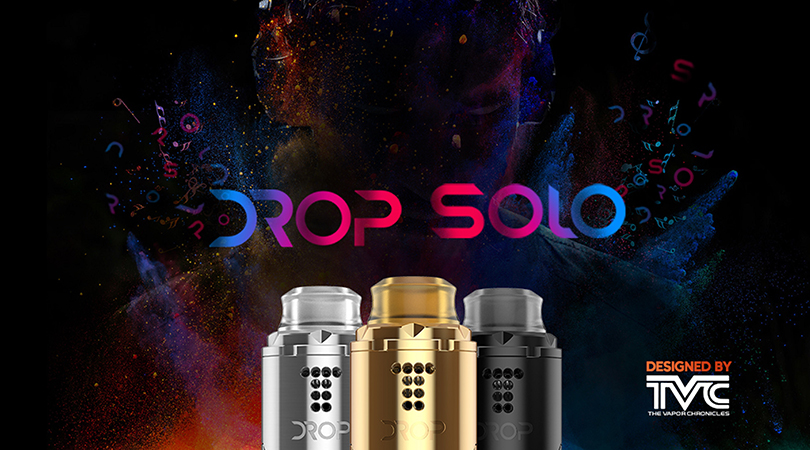 The Digiflavor brand has become a major talking point for the vaping industry for the past several years, climbing its way to success by partnering with some of the industry’s most recognized reality’s. In 2017, it formed an iconic relationship with Vapor Chronicles Brian Herb, which resulted in one of the most popular RDA’s the market has ever seen, the Drop RDA. Its plan now is to push those boundaries of success and make a bold move to one-up itself by releasing its brain-child, the Digiflavor Drop Solo RDA.

The Drop Solo RDA is a brilliantly designed rebuildable dripping atomizer that not only features a compact design but has also been specially engineered for those that prefer single coil configurations. While other RDA’s may focus greatly on generating the best vapor production, the Drop Solo has been designed to deliver the best flavor production. Its compact 22mm diameter design, the small enclosure, precision airflow, and a single coil configuration will deliver just that, flavor!

Similar to the popular Drop RDA, the Drop Solo offers a striking resemblance, except for the fact that it only contains two posts, both positive and negative. It still features the same slightly crafted slant to make coil installations a breeze, and its posts boast rather large post holes, making the installations even easier. What’s incredible about its build deck design is that once you install the coil, you can then trim any excess wire below the posts and remove it with ease. Additionally, the build deck also allows a large amount of room, leaving a large 5mm deep juice well that won’t shy away from over dripping or squonking — at the same time lowering the possibility of potential leaking.

The airflow design is absolutely superb, features a stepped airflow that allows you to dial in the airflow with precision, eliminating any whistling and causing for an overly satisfying vape experience where airflow is plentiful if you choose it. While the Digiflavor Drop Solo RDA has been geared towards creating a better flavor production, you can achieve a balance between flavor and vapor by easily adjusting the airflow via the top of the RDA.

Adopting its magnificent appearance from the original Drop RDA, the Drop Solo too looks extraordinary. It’s constructed of a superior stainless steel material and boasts a transparent top cap, playing up its appeal. While the caps are used to make the Drop Solo look incredible, it also serves greatly towards the performance. For instance, the stainless steel cap has more space and airflow, while the transparent cap features a lower profile and a reduced chamber. Everything about the Digiflavor Drop Solo RDA is truly remarkable, and we’re sure you’ll enjoy it just as much as you did the original Drop!