With the electronic cigarette industry rapidly evolving, the growth of new products, blogs, chats and videos are starting to surface every month. Word of mouth begins to spread like a wildfire and the hype builds with what looks to be no limit. We see these new things come to this community each month and then it dies as another approaches, yesterdays new becoming tomorrows old.

The VapeTeam, it has built a lot of hype and if you’re within the community, it’s all you’ve heard. They’ve been tweeted, G+’d, talked about, featured in videos and even blogged about here at GuideToVaping. Could all this hype be worth it? Although I’m all for this project I,  like a handful of others in the community have had to of questioned it at one point or another. You’ve been wondering what’s really been going down and waiting for that scoop of info to be released to the public. Guess what? GuideToVaping has it…

Tonight I was allowed to participate in the first official beta testing for the VapeTeam. This means I’ve got to see the full setup of how everything would run, a demonstration of how the giveaways would differ from other networks and most importantly, how the community could take part in this soon to be ‘new hit’. The big question is, was it everything that it was said to be with the different video outlet than the regular Stickam? Yes… it was. I’m taking multiple monitor setups, synergy linked masterpiece of awesomeness. This looked like a breeze from the viewers standpoint, but seeing Jamie’s job at hand, I had to stop him in the middle of the testing and ask him “With that type of setup, how is it even possible to keep track of what’s what? I would rack my brain and possibly lose control!”

“I’ve been doing audio and media for several years and this is definitely the most complicated setup I have done. My main keys were reliability and quality. I have many professional equipment running with the goal to provide the best quality possible. When I’m doing a team show, we are not all in the same room. I have to be able to get the feel not only for the audience, but the hosts and guests to get that communal feeling.” says Jamie.

I can see Jamie has a lot of work ahead of him and all I can do is offer a Tylenol, and I doubt that would even leave a dent. 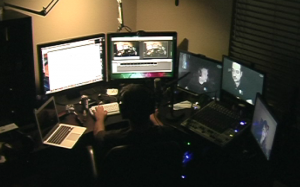 During my privileged session of the beta test for the VP Live VapeTeam show, a few brow raising features struck my attention. The quick transitions and multi-paned options had a nice flow and the integration between Google+ Hangouts, Skype and the show seemed to have already made its mark on myself. I was sold, what can I say? It didn’t stop there, Dimitris performed a quick sneak peek of how the giveaways will be held. Although I’m not at liberty to say what will actually take place, I can tell you there is no more number generation, no more guessing, only anticipation and built up hype. It looks like this ‘team’ has revolved around the hype and as you can see in the picture above, it’s working. The guys all took a break and chilled in the hangout for a bit, so I had to sneak in a question. “What do you think this new massive technology station will produce? It’s obvious that all the hype is true, but do you see it getting bigger or could this become another fad like the community has seen in the past?”

“The only way to really feel the wide variety of topics, vapers and potential vapers can be covered is using the technology we are implementing to VP Live. After the many hours of research we have done, we’ve felt that this type of informative talk show was missing from the vaping community and with the creation of a “Vape Team”, we are able to span a great variety of topics in an informed and professional manner.” says Dimitris.

Throughout the small bit of time I did have with the 3 VapeTeam members, everything seemed to flow well. The video transitions and audio was spot on, but the chemistry between them is what stood out. After the testing I dropped a few lines to Jason. “In our beta session I noticed you and Dimitris have really good chemistry on cam, it almost seems natural. I didn’t get to see how well you guys worked with Jacinda, so how is the chemistry between you 3 together?”

“Assembling the ‘team’ was a long process. Our friendship over the past months made us realize that we didn’t only have the passion for ecigs and this wonderful invention that made us break the tobacco addiction, but our goal to help others do the same. You will naturally see that on the show.” says Jason.

After wrapping it up with the guys, I asked Dimitris if he would like to include anything in this exclusive article and this is what he had to say…

“Finally, I would like to add the key to the success to our Vape Team will be the community interaction. I’m sure you’ve noticed the multiple outlets that people can actually interact with us and with the rest of the community. The more people who get involved, the better it will be not only for the veteran vapers, but new people looking to kick the dirty habit.”

Thanks to the “VapeTeam” for letting GuideToVaping cover this story and for giving me the opportunity to help them do the beta testing.

The VapeTeam is an awesome new project under way and will be finally going live, Tonight at 9:30PM EST. Catch the VapeTeam Live at http://www.VapeTeam.com every Wednesday Night.

If it’s big and happening in the electronic cigarette community, GuideToVaping covers it! Exclusive news on the VapeTeam only at GuideToVaping.com