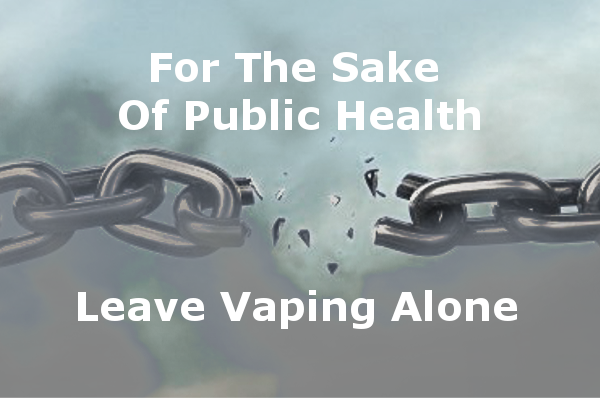 For the sake of public health, leave vaping alone.  Words I have often said over the last couple of years, as we have been fighting on every level to keep the vaping industry alive in the face of the many entities who would like us to disappear.  Over the last month or two, I have heard and seen these exact words across many publications and reports.  Not from the vaping industry, but from those on the outside who are now beginning to understand the ramifications of the success of this new technology.

The Playing Field Is Changing

Less than a year ago, public perception was guided entirely by falsified scientific research and puppets who were being paid to tell untruths.  While this behavior is still rampant, since the release of a report from Public Health England declaring  “Vaping Is 95% less harmful than smoking”, it appears we have seen a slight shift in the way this industry is viewed.  As Americans are cowering in corners, preparing for the hammer of the FDA to fall, local municipalities are banning the use of vaping equipment every where,  but we appear to have voices of reason speaking out on our behalf.
The largest opponent base currently facing off against the vaping industry, should arguably be our greatest allies in the fight against tobacco products.  The anti-smoking coalitions should be standing shoulder to shoulder with former smokers who have broken free of the very things they been fighting against for years.  Do they stand against us because of disinformation or because their puritan attitudes will not be quelled until any form of nicotine use has been exterminated.  Their outcry for many years has been that cigarettes posed a threat to public health, yet here we stand with a product that has been scientifically proven to eliminate almost all of their worries, and has the potential to save hundreds of thousands, if not millions of lives.  They are currently trying to destroy the very tool that has been created to accomplish their goal, and in all honesty it feels as though they are hacking at the fire hose while their house is burning.  Unfortunately for the vape haters, as quickly as one study comes out it is crushed by scientific fact.  For every post made to vilify vaping, 30 already exist to counter its arguments.  We have become very good at defending our cause but we are now getting help from the outside.

Who IS In Our Corner

While we have many vaping advocates, one who is quickly becoming well-known amongst vapers and our opponents originated well outside the box.

Clive Bates is currently the Director of The CounterFactual: public interest consulting and analytical advocacy.  This man has never vaped, never smoked and was at one time the director of  Action on Smoking and Health (ASH).

Head of one of the most well-known public health campaigning organisations. The role included both domestic and international activity focused on tobacco marketing, product and packaging regulation, tax, smuggling, smoke-free places, treatment for addiction and harm reduction. I worked on development of the WHO’s first international treaty – the Framework Convention on Tobacco Control.

Here we have a man who was at one time deep in the heart of the anti-smoking camp.  To him, smoking was, and still is detrimental to public health.  For a man who worked so hard to rid the world of cigarettes, to be working as hard as he does to bring vaping into a better light, our industry MUST be doing something right.  Here we have someone who truly cares about the health of the public, not the well-being of corporations and politicians who have grown accustomed to bumper paydays.  While others are looking for better ways to increase tax revenue on this new “dangerous addiction” he is looking for ways to put out the misinformation fires and get this disruptive technology into the hands of anyone who has ever picked up a cigarette.

This is just one of many proponents who are popping up to defend us.  In all honesty, we currently need thousands more who are outside the industry to stand up and be counted.

His message is clear, in an article earlier this week titled:

Memo to public health grandees: vaping, vapers and you

He pretty much laid out the ground work for how public health officials, and governments should approach the electronic nicotine device industry as it spreads around the world.  The message is clear and simple, it pretty much starts by telling them they are all wrong.

Dear Public Health Grandees (you know who you are),

I consider myself a public health advocate and, though I’m not a vaper and have never smoked, I support vaping as a tobacco harm reduction strategy, with enormous potential to reduce death and disease globally. It’s a good approach for public health as it doesn’t require prohibitions, coercion, punitive taxes or rely on fear and it goes with the grain of behavior and what people want. I thought it might help you if I explained what I have learned about vaping and vapers, and why your relationship with them is so poor.

After briefly explaining what vapers are doing he makes a very simple yet effective statement (which he can factually back up).

Vapers think you don’t understand their model – and you don’t care what the evidence says.
You have shown no sign of understanding how this works – and keep seeing it as a tobacco industry plot (they were late to the party) or some sort of rogue medical product. Neither is true. But vapers rightly suspect you are careless with the truth: most public health organisations united to support a ban on snus in the European Union in 1992, again in 2001, and once again in the 2014 Tobacco Products Directive. This is despite indisputable evidence that snus, a very low risk way of taking recreational nicotine, has been highly positive for public health where it is permitted and used in Scandinavia – displacing smoking, diverting smoking onset, and supporting user-driven quitting. There is no scientific, ethical or legal case for banning it – but you supported it anyway. This is the same public health model as vaping, so it is no wonder they don’t trust you. Until you face up to the lethal error you have made on snus, you have not earned the right to a hearing on vaping. To the extent that smokers believe what you say, you are likely to be protecting cigarette sales by creating unfounded fear about a much safer alternative and causing damage to health that would otherwise be avoidable.

I encourage you to read the entire article for yourselves, but I will share one more excerpt here:

The real public is not like the bland smiley types you see in NRT adverts or the dumb animations of Change-4-Life.  Public health is a gritty business, not about the provision of happy-clappy advice to a peasantry grateful for your wisdom and awed by your status. If that is how you think,  you’re in the wrong job.

This man will stand toe to toe with the heads of nations and we should be prepared to do the same.  He has no dog in this fight but is more than happy to put the needs of the many before the pockets of the few and as vapers, we should be ashamed we aren’t already by his side.
We are an industry, we are a community and we have in our hands the tools that the anti-smoking zealots have been dreaming of for years.  It is now our task to convince them that if they want to achieve their goal, they will have to help us achieve ours.