Formaldehyde in e-cigarettes, a rallying cry for so many who oppose the vaping community, has once again been brought to light as the latest data on the subject has been released.

While studies have been previously performed, the majority have been decried as misleading due to poor testing conditions, unrealistic usage of devices, and basic skewing of data to reach a predetermined conclusion.  One such study pertained to a CE4 that was used at power levels far exceeding the manufacturers recommendations, which managed to produce “formaldehyde releasing agents”.

If you set fire to a steak and burn it to a crisp, you will get the same result, which is why the majority of vapers take these studies with a grain of salt.

Effect of variable power levels on the yield of total aerosol mass and formation of aldehydes in e-cigarette aerosols is a study that has just been published in the Regulatory Toxicology and Pharmacology  section of sciencedirect.com. The study looks at 5 different tank systems to get a grasp on the actual amounts of aldehydes being produced.

In this study there were 5 clearomizer tanks that were being used.  The CE4 tank was introduced at the beginning stages of the clearomizer boom.  As the tank market progressed, the KangerTech Protank V1 and Aspire Nautilus set the path for others.  Next came the Innokin Gladius, and the last of the 5 tanks, this being the most up to date, is the KangerTech SubTank.

The chart below shows the expected exposure to a vaper using 3 ml of e-liquid through each of them.  While we are all very aware that the average sub-ohm vaper can use much more than ml in a day, in order to hit the OSHA “safe work limit” of 5.3 mg of formaldehyde, you would have to literally have to drain over 400 ml at 25 watts in a Subtank. 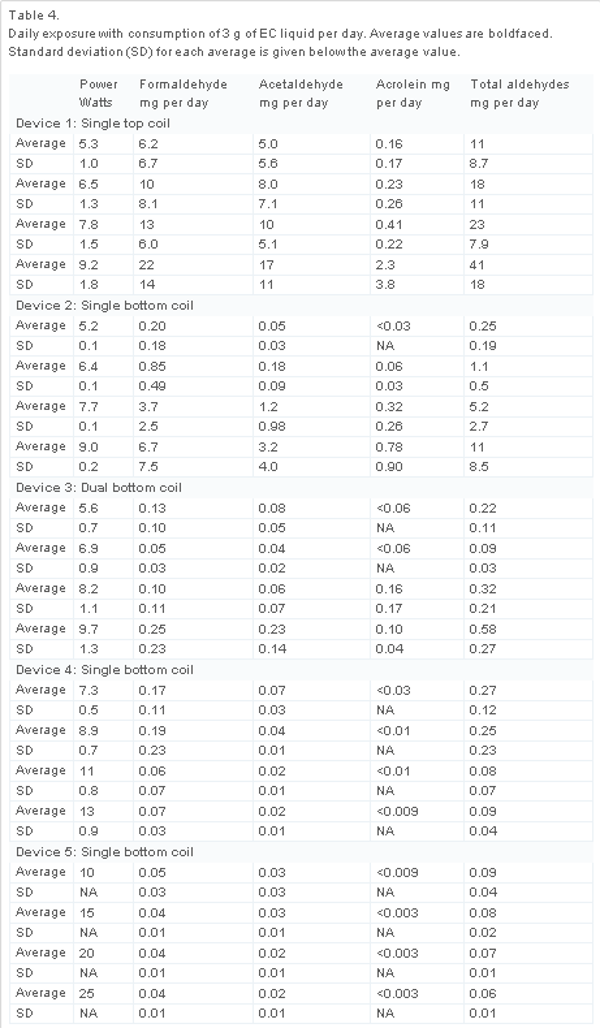 To keep this in perspective, so no-one freaks out and runs in the streets thinking they are dying – if you smoked before vaping, as most of us did, each cigarette created between 3.4 and 8.8 mg.  If you smoked 2 packs a day, like I did, even the CE4 is a massive reduction.

Each device was used per the manufacturer’s instructions, there was no dry burning for an hour to get the results that were predetermined.  The tanks use a variety of wicking materials from Silica string to organic cotton and all but one are bottom fed systems.

The first 3 tanks seemed to show an increase in Aldehyde production as more power was applied to the coil, but the last 2 seemed to go in the opposite direction.  It shows that top coil systems like the CE4 belong deep in a trash can, while newer systems like the bottom fed Kanger Subtank are working well for vapers.

Reading deeper into the study, higher wattage does not necessarily equate to higher aldehyde production, newer tanks are built to more adequately keep the coils and wicks saturated with e-liquid.  The application of higher temperatures to the wicking and coils, getting the dry burning, is what actually produces the toxins.  Vapers already knew these results way before this study was released, but it is nice to finally have the evidence to support the theory.

One thing that I will point out before we leave though is this:  If the FDA’s deeming regulations are pushed through, taking all devices and tanks produced since 2007 off the market, the only things we’ll be left with are those that produce high levels of aldehydes.

Vaping may not be 100% safe – we’ve never claimed that it is, but we can now prove that it is 1000 times safer than smoking.