In a single afternoon, many members of the vaping community —both within the industry and the consumers that they diligently serve— went from feeling as though they were force-fed dog food to a feeling of jovial optimism.  This post was originally going to be centered around a single subject, the David Vs Goliath fight being waged by the Village of Hartland, WI. against the FDA, but the way the day tied together needs to be seen as a single issue. 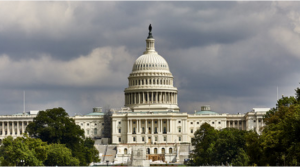 Monday, May 1st 2017 will go down in history as the day that Nancy Pelosi described Cole-Bishops amendment to the Appropriations Bill to change the predicate date for vapor products as a poison pill.  She, along with congressional Democrats are so intent on keeping their lies alive —Think of the children, vaping will turn them to cigarettes, vapor products contain anti-freeze etc— that when they reported on this decision it was labeled as a way to make sure that vapor technology remained under FDA control.  In their world view, changing the predicate date will take away all of the FDA’s power, including age restrictions and childproof packaging.  The only poison attached to the rider was continuing toxic effect vaping has on the profits of pharmaceutical companies who peddle sub par “smoking cessation tools” and States Tobacco taxes that have been rapidly dwindling since people have realized that vaping actually works.  While this may have been defeated, another budget will be on the table in less than 5 months and we will have another chance to change the date of the impending shut down of the open system market in 2018. 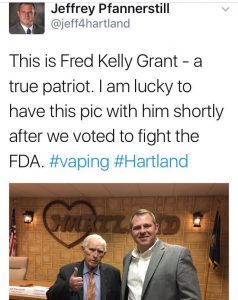 While those words may not be in the final edition of the document being sent to Health & Human Services Secretary Tom Price, the sentiments of the village council of Hartland, Wisconsin –population 9200– will be forever be ingrained in the minds of those that watched the crafting of the last draft of a letter making its way to the nation’s Capital.  At the beginning of over 14 hours of testimony many of the council’s members –led by Village President Jeffrey Pfannerstill– had little to no knowledge of the scope of the FDA’s deeming regulations of the e-liquid industry.  After testimony outlining the effects of the FDA’s deeming regulations on the Vaping industry, including Greg Troutman —Louisville KY attorney who was recently involved in the push back against the Indiana State regulations against vaping and Kentucky Smoke Free representative, Jeff Stier Senior fellow at the National Center for Public Policy Research, Lou Ritter consumer advocate and founding member of AEMSA, Aaron Biebert of Attention Era Media, the people who brought us the documentary “A Billion lives” — and many more, the town council spent the weekend putting together the draft copy of their findings.

By not coordinating with local government, the town council found that the FDA regulations are outside of Federal law.  Several reasons were brought to bear, failure to coordinate being the main issue, but they tore into the FDA for failure to create standards in the e-liquid industry, instead taking a stance of making the rules so complex that everyone fails.  No representative of the FDA was present at the meetings to defend the deeming rules, which in itself is very telling — how can you defend the indefensible.  Hearing officer Fred Kelly Grant at one point referred to the deeming reg’s as “Galactically Stupid”, however the statement was stricken from the document.

Hartland voted to stand up for truth and to help stop the crazy regs by the FDA on vaping. We voted to support truth and the good vape business in Hartland, WI, USA. We voted. It ain’t over though, we just woke a sleeping giant.

While We Were Watching The Meeting Unfold

While many of us were tuned into the final meeting in Hartland, news started to come across the wire that a major announcement had come through from the FDA’s office in a post from the Vapor Technology Association:

“VTA has been working closely with Breathe Easier Alliance of Alabama (BEAA) on an administration strategy for the past couple months. Last week, we met with senior leadership at HHS emphasizing the need to re-evaluate the deeming regulation. Earlier today, Stacey Hamilton, President of BEAA and VTA Board Member, informed us that FDA sought an extension of its briefing schedule in Cyclops Vapor v. FDA so that the FDA could re-evaluate the deeming”.

Within minutes of this being released, a 3 month extension to the FDA’s deeming regulation deadline of August 8th, 2018 was announced, moving the goalposts down the road to November of 2018.  The explanation was to give the incoming administration, new head of the FDA and Secretary of HHS time to fully explore and understand the vapor regulations as they currently stand.

From the standpoint of vaping advocacy, yesterday started with a bad taste, but as the day went on it significantly improved.  When you combine this with Cole-Bishops HR1136 and Duncan Hunters proposed new bill, the tide may finally be starting to turn in favor of Tobacco Harm Reduction rather than corporate profits and State taxes.