GeekVape has become a household name for vapers all around the world, creating some of the most innovative products on the market that span from mods, accessories, and where it displays its talents best, rebuildable atomizers. The GeekVape Blitzen RTA is the latest atomizer to join the list, featuring a remarkable appearance that’s a step above the rest, and a side airflow design that delivers a smooth and plentiful vapor experience on course for 2018. If you’re an RTA (Rebuildable Tank Atomizer) fan, you’re going to love the Blitzen RTA! 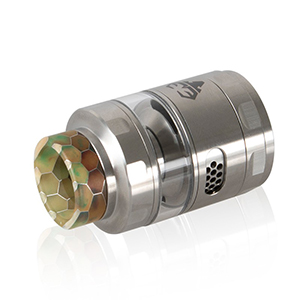 Constructed of stainless steel and boasting a rather compact structure of 24mm in diameter and only 46mm in height, the Blitzen RTA presents a structurally sound body while using a minimum amount of material. You’ll find the top of the atomizer looks incredibly pleasing with its 810 wide bore resin drip tip available in various appealing colors. For those that prefer 510 drip tips, a 510 drip tip adapter comes included. While the Blitzen RTA may be available in several color options, including stainless steel, gunmetal, rainbow, blue and black, its marvelous appearance isn’t the only thing this atomizer has to offer. Continue reading as we share more…

Just under the top cap is the top fill chimney, making it incredibly convenient and easy to refill. Just below that is its glass section which offers a 2ML capacity with its normal/default glass section, while a 5ML e-liquid capacity is achievable when using its bubble glass section. Moving further down you’ll find the mid-cap sports dual side airflow control for a smooth and plentiful vapor experience. The build deck on this bad boy is built into the base for convenient access and features an 18mm postless build deck that allows for easy coil building while supporting both single and dual coil builds.

It’s an RTA that comes equipped with an awesome appearance and matches perfectly by sharing many internal features. Put all of this together and you’ve got yourself a rebuildable tank atomizer that is a must have RTA for the new year!