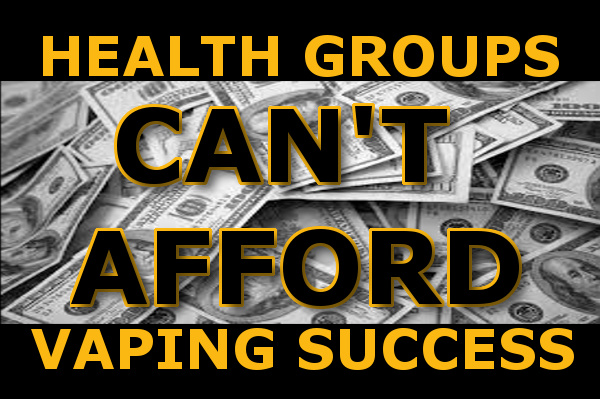 Vaping advocates already understand that health groups and anti-smoking campaigners can’t afford the success of the vaping industry.  This post is aimed towards those who may not be aware of the struggle that the vaping industry faces on a daily basis.

This article was brought about following a conversation I had yesterday.  A friend asked why groups who should be at the forefront of the vaping march are the ones we always seem to see blocking the road, regardless of the evidence that is put in front of them.  He couldn’t understand why massive organisations seemed unable to pull up the same studies about electronic cigarettes as we do on a regular basis and always seem to pull numbers from the same studies that were debunked several years ago.

The conversation started because of the media onslaught after Leonardo Di Caprio was seen vaping at the SAG awards and the nonsensical attacks by the American Lung Association.  This combined with some leaflets that have been seen locally made him question the sanity and ethics of people who were supposedly looking out for the interest of the citizens.

I am going to attempt to explain the situation to you as I did to him, as simply as possible, without any conspiracy theories and by the end of it, you can draw your own conclusions. 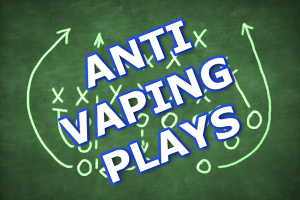 It seems we have developed a class of citizens who cry quit or die when it comes to cigarettes.  There is no middle ground unless you are using products that have been sanctioned by the FDA and are made by Pharmaceutical companies, gum, patches or pills that make the cravings disappear.  In their minds, vaping and smoking are the same thing, or in some cases vaping is worse, regardless of the evidence to the contrary.

We have groups like the American Lung Association, the American Heart Association and the American Cancer society decrying vaping with out-dated information while keeping a straight face.  They keep public opinion clouded with disinformation and in many cases outright lies, all the time stating that they are doing what is best for the interests of the people.

If you have ever read on a website that e-liquid contains anti-freeze, that there ARE 10x more cancer causing agents in e-cigarettes than traditional tobacco product or that “e-smoke aerosol” is harmful to anyone around a vaper, these facts were not put there by mistake.

If this were the 1930’s and people had to wait several months to receive a copy of a study, they could get away with being misinformed.  Unfortunately for them, we live in the information age and for every one of their attempts to skew the data, we have 10 rebuttals and questions about their testing methods.  More often than not, the tests and studies these people are quoting from have been put to rest by the people who wrote them but the “advocates” cling on to these facts as if they were Miss Columbia after Steve Harvey was corrected at the Miss Universe Contest.

Why Not Tell The Truth

The United Kingdom are preparing to offer vaping devices to people trying to quit smoking through their doctors offices and here we are, surrounded by people clinging to the idea that Electronic Nicotine Delivery Systems are somehow more harmful than the alternative.  When faced with the truth of the situation, these organisations are silent for a second before falling back to their prepared statements, such as:

“We don’t know what is in these devices”

or my personal favorite:

” There have been no conclusive studies on their safety”

The general public doesn’t seem to understand that if smoking cigarettes were to become a thing of the past, so would the chosen careers of many of these people.  Imagine if you would, tomorrow morning waking up and all of the smokers on the face of the earth

Imagine if you would, tomorrow morning waking up and all of the smokers on the face of the earth quit, simultaneously, for no reason other than they were done.  People who have spent a lifetime fighting against this problem would be out of work, and there are a lot of people who this would affect.  Fighting tobacco and smoking related diseases is BIG BUSINESS, none of these folks are doing it out of the kindness of their hearts.

Now here is where it gets a little bit hinky.  Most of the funding for these various organisations comes from government funding in the form of grants, and as long as there is a fight going on, they can continue to get their paychecks.  A lot of the money they receive from the government comes from tobacco taxes and the Master Settlement Agreements that the Government made with the tobacco companies a few years ago.   So you basically have the smokers paying taxes on products that can then be used against them by these groups to help them from stop smoking cigarettes and be free of nicotine.  Others get large payments from the makers of the alternatives I mentioned earlier, the large pharmaceutical companies as well as taking money through donations as some are also registered charities.

As more and more people have paid attention to their campaigns and plea’s to quit, the money that has been going into the pot has been getting lower and lower, but the Government has continued funding them because what they are doing works.

Along comes vaping, with its trendy devices and a way to stop smoking without the need for Pharmaceutical products or the help lines that these groups have spent years organising, basically the people have found a way around the system.  We have 1 in 5 smokers taking their money out of the pot and handing it to an industry that has been deemed 95-99% less harmful by the British Government.

Professor Peter Hajek – Director of the Wolfson Institute of Preventive Medicine’s Tobacco Dependence Research Unit at Queen Mary University of London – has made the claim that electronic cigarettes have the potential to completely eliminate smoking-related diseases, but our health care advocates seem deaf to his words, or for that matter the words of anyone who speaks out in favor of vaping.

They don’t want something that works too well, as I said earlier, if smoking disappeared tomorrow they would be out of work.

This may be a very cynical view of people who spend their careers looking to improve the health of others, but we can not ignore the facts as they seem to do every time they send out another press release filled with bad information.  In the future, they may have a change of heart and see vaping as a viable means to help cigarette addicts curb their cravings, but in the meantime, it looks like they are just out to help the Government earn more money to pay them with.