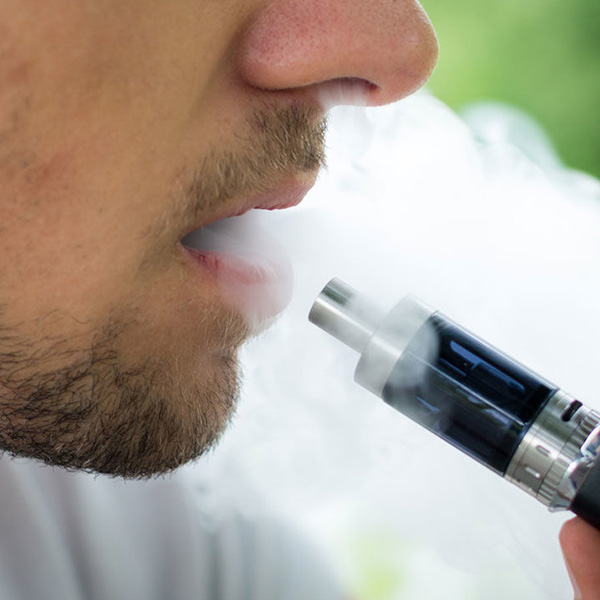 When vaping and other e-cigarette devices first came onto the market, they quickly became one of the most popular ways to quit smoking. Their convenience and reputation for a smooth pull helped the popularity of vaping grow immensely. Overnight, vaping products became well regarded among those who wished to quit smoking.

Once vaping entered the mainstream, more legislation around these devices came out, including a clear age limit for buying and selling e-cigarettes.

This age limit was especially crucial in the United Kingdom. Many people in the country and worldwide had started vaping.

To combat the use of vapes and e-cigarettes by minors, legislators enacted age limits around e-cigarettes in the UK. In this guide, we review these restrictions and whether underage vaping is a problem in the UK.

The Invention of Vaping

It may now seem obvious that vaping would be very attractive to minors. However, it was not initially an invention that had youth in mind.

Modern e-cigarettes were initially the invention of Hon Lik, a Chinese pharmacist who began his work around 2001.

Lik was attempting to quit smoking and using the nicotine patch to do so. However, he found it and other traditional Chinese methods of quitting ineffective. One night after leaving on a high-dose patch while falling asleep, he had terrifying nightmares. This horrible incident ignited the pharmacist’s desire to create an alternative therapy for those who wanted to quit tobacco products.

Lik would soon go on to create a vaporizer that used ultrasound technology to heat e-liquid. He invented a device that looks almost identical to the ones used around the world today.

In 2004 he patented his work, and soon after, the e-cigarette gained international popularity. The design of modern vaping products differs from Hon Lik’s invention. However, his idea to vaporize e-liquids was fundamental to the creation of the modern vape.

Hok Lin invented the device to provide another feasible path to health for those who wanted to lower nicotine consumption and cigarette addiction through the use of vaping. But, his plans hadn’t considered the potential impact vaping could have on those under the legal age for traditional tobacco consumption. He had not intended for youths to vape.

What Is the Legal Age to Vape in the UK?

Currently, it is legal to vape in the UK for those aged 18 years and above.

When vaping was first getting popular, it lacked legislation surrounding its use. Thus, part of the issue for minors was a result of that grey area.

Another issue was the abundance of unconventional “fun” flavours associated with smoking E-cigarettes.

What About Zero-Nicotine Products?

While there are zero-nicotine products available, these e-liquids are in a legal grey area in the United Kingdom. That said, most legitimate shops will not sell these liquids to those under the legal age or other tobacco products.

The logic regarding this is that no shop wants to be liable for an illegal sale to minors. S

Altogether, most respectable shops will not provide any of these items to minors. That hesitation is a good thing. It helps to preserve the health and safety of their business and the broader community.

Vaping: The Attraction for Younger People

Part of the reason for its popularity with a younger age bracket was the design. It was easy to camouflage an E-cigarette as a zero-nicotine product. After all, there were plenty of stores selling zero-nicotine vapes that looked identical to a tobacco-filled vape.

So, before vaping became prevalent, it was easy to hide that younger users were illegally smoking with a vape.

Also, vaping is said to have less of an unpleasant aftertaste. The flavour often attracts new users.

Since legislation around the legal age to buy, no legitimate shops will sell vapes to underage persons, online or in person. If they do, they could face hefty fines, of up to £2,500 per incident of illegal sale.

When purchasing these vaping products online, there is traditionally an age verification process. The user will need to verify their age before they can see the product.

For in-person purchases, the clerk will look at an individual’s ID before proceeding with the sale.

Is Underage Vaping in the UK a Problem?

In most places around the world, underage vaping is a severe problem. When the product first entered the market, it became incredibly trendy to vape among younger users. The UK was no exception to this worldwide craze.

Two primary causes are contributing to vaping among minors: advertising and the flavours.

There are tons of varying theories about why vaping became so popular with minors around the globe. Likely, the popularity of vaping among youth was because advertising companies focused so much on vaping as an alternative to traditional methods of smoking.

Vaping has a reputation for being less smelly, modern, and even cool. Many young people find it trendy to get a personalized e-cigarette.

Also, social media stars have shaped part of this surge in popularity. Across platforms like Twitter, Tik Tok, and even Instagram, these stars have appeared with vapes in hand.

Further exacerbating the glamourization of vaping for youth where the flavours on offer.

Most tobacco products taste either like a regular cigarette or have a minty flavour from menthol. E-liquids come in a ton of different varieties.

From fruit flavours to mint to bubble gum, and more, these ‘fun’ flavours seem to target younger users. Any reasonable person would assume these unusual tastes will have contributed to the popularity of vaping products among minors.

The initial intent of these flavours was to help ease the burden of quitting on those older smokers. However, it seemingly backfired. In fact, in certain countries, the sale of all flavoured nicotine products is illegal regardless of age.

This widespread ban on flavoured e-juices was part of an attempt to make vaping less appealing to younger users. Some felt that these flavours illegally targeted minors in their advertising.

Vaping Age Restrictions Around the World

Across the globe, different countries and constituents are dealing vaping among minors in different ways. Most countries have enacted strict laws around age restriction for these tobacco products and general smoking.

In the UK, the vaping age remains 18 years old. But in the United States, the legal age of consumption of most tobacco products is rising to 21. This shift is part of a movement called either T-21, or Tobacco-21. The movement involved lobbyists campaigning for tighter age limits around the sale of all tobacco products throughout the United States. Before this law, it was up to the states to set age limits. Although all age limits were at least 18 even before this, T-21 lobbying began for all tobacco smoking.

For a time, Belgium allowed those 16 and older to purchase vapes. It was the last country in the European Union to allow minors access to such products. But, in 2019, after significant pressure, from both its citizens and external ties, Belgium raised the vaping age to 18. Now the continent of Europe seems to have a consensus that to buy e-cigarettes, an individual must be 18 years old.

By contrast, South Koreans cannot buy e-cigarettes until they hit age 19. But in Japan, minors can purchase non-nicotine vapes, and they can only buy nicotine-based e-liquids at 18.

All in all, vaping across the world remains popular. But the legal age to buy these products in the UK remains 18. As various countries continue to grapple with the effects of tobacco on their populace, more legislations around these products are likely to occur.

If you or someone in your family has an interest in e-cigarettes, be mindful of the laws. As this is a relatively new field, you want to be cautious about the differences between the UK and international laws. Also, only shop at legitimate retailers selling vaping liquid with the proper protocols in a place like RELX UK.