Ever since it’s release, my inbox has been plagued by readers and friends telling me that they’ve destroyed the glass used on the Wismec Theorem RTA.   For the majority of users, the problems are occurring within the first day or 2 of use — my Theorem is now 3 weeks old and has had multiple glass changes (including the metal sleeve) without incident.  There have been several occasions where I could have broken them very easily, but I was able to keep the glass in perfect condition, thankfully.  Over the next few minutes I will let you in on the “tips and tricks” I used to keep it in one piece.

Note: I actually purchased the tank so that I could figure out what exactly is causing all the problems, from glass breaking to the metal sleeve ending up with a busted insert. 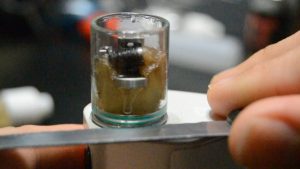 As simple as that sounds, the number of people who I have spoken to who broke the glass while initially trying to remove it, is unbelievable.

The glass on this tank is not like the loose-fitting inserts you find on almost everything else.  It is tight, and has been precision engineered to hold together with nothing more than the friction between the sleeve and O-rings.  A sudden jerk in any direction will be enough to cause a fracture.  It’s that simple, unfortunately. 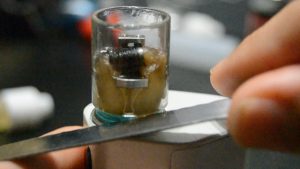 I’m going to be honest, the first time I took the glass off, it almost broke.  Trying to pull it by hand was a bad idea that I quickly rectified, deciding instead to slide a thin knife blade between the edge of the glass and the metal base of the tank.  I ran it around the circumference, once, and the glass slid off with ease.

Remember, when doing this you’ll need patience.  Be gentle, as these tanks are very fragile — something many have come to learn the hard way. 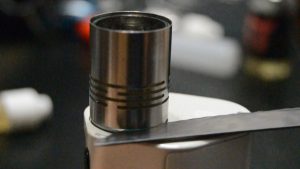 The same applies to the glass/metal sleeve.  If you place the knife blade between the top of your mod and the bottom of the deck, and then work it gently between the glass and base, it will work the same way.  By doing this, you’ll avoid cracking the glass or ripping the sleeve off.

Being that this has become a frustrating issue for consumers, I’m sure in the revision or updated version of the Theorem, this issue will likely not exist.  However, with this first release, we’re going to have to use this technique to ensure the product we purchased stays intact.

Tip #2: Lubrication Is Your Friend

I know if someone was reading over your shoulder and saw just the title in this post, it would probably look bad.

Putting the Theorem back together is also causing problems it seems.  Brute force is causing broken glass, but the simplest way to make everything fall perfectly into place is by rubbing a small amount of e-liquid onto the bottom o-rings to help the tube slide with ease.  There is no rocket science or trickery involved, simply treat the tank with care, be gentle, and it will not break.

By taking your time and not trying to hulk the tank open, you can actually save yourself a lot of heartache and pain.  I know that this design is not something that many of us are used to, normally the tight-fitting parts are metal and not so easy to destroy, but if you treat it with respect, the Theorem is a killer piece of kit.