The FDA’s deeming regulations on electronic cigarettes/vaping devices/Electronic Nicotine Delivery Systems WILL lead to preventable deaths.  If you have no idea about the regulations put in place earlier this week in Washington, we are going to spend a few minutes explaining how a federal agency tasked with protecting the general public from harm has just taken a time bomb and started it ticking again.

For those who don’t know, vaping has been around for a decade.  It isn’t something that has just popped up from nowhere, even though it has only become noticeable in the mainstream over the last 4 years.  It was brought around because people were looking to get away from cigarettes and none of the products on the market worked.  The success rates of the “approved” methods of smoking cessation are at best laughable (some would say deliberately), and the concept and execution of the vaping devices seem to be having a much greater impact on the decline of smoker rates than any of its predecessors.

Vaping is the process of heating a liquid, generally made up of propylene glycol (despite what you may have heard, this is not dangerous) vegetable glycerin, standard flavoring (the kind you find in rock candy, cakes and just about anything else you can think of) and possibly nicotine, into a vapor.  When you burn anything, it has the potential to release carcinogens and other gasses, which is what makes smoking dangerous.

Take away the burning aspect, take away the majority of the harm.  A simple fact backed up by the recent report from the Royal College Of Physicians in London that states that vaping is at least 95% less harmful than smoking.  32,000 physicians held in high regard in the medical community all signed off on this fact.  Combine this with the idea that vaping has the potential to be the best tool in the fight against combustible tobacco that we have ever seen and that their recommendation was that all smokers who are looking for a less harmful alternative should be guided towards these products.

One would believe that a government agency charged with keeping the population safe, would take notice.  When a group of medical professionals who take their Hippocratic oaths (of doing no harm) very seriously, to the point where they were the very organization who started the war against tobacco in the first place gives out advice, why would the FDA completely ignore it?

Some regulations were necessary, no one will argue against that point.

No one wants to see young people picking up any habit, even if one is considerably less harmful than the other, vapers don’t want anyone under the age of 18 using these products.  Making sure that e-liquids are made to certain standards and that they are contained in such a way that children can not get into them easily, are important points.  All of which were implemented and monitored by an unregulated industry.  Their consumer driven market quickly recognized what safeguards needed to be put in place and did so, without the aid of Government. 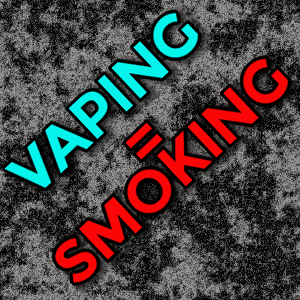 The FDA’s edict, however, does so much more than regulate this industry.  They all but destroy it for all but the very few who can afford to keep their doors open.  The majority of these are small companies, many with less than 50 employee’s, who are looking to help the 1 in 6 Americans make the transition from combustible tobacco to a less harmful alternative.

The edict states that, in the eyes of the FDA, these products are no different, what so ever, than cigarettes.  Plain and simple, they are tobacco products.  Even products that contain no nicotine are to be seen as tobacco if the “intended use” is for vaping.
They have also told these companies that they essentially have to lie to their customers.  Even though we have scientific evidence and 32,000 doctors backing it up, if anyone says that these products are anything other than cigarettes, they can face all kinds of punitive action.

By withholding the evidence and pushing for Status Quo, the FDA are essentially telling 50,000,000 adult Americans to continue smoking as usual or use gums, patches and pills that do no good to try to quit, for the simple fact that in their eyes, vaping is just as dangerous ( if not more dangerous) as smoking.  According to the CDC, 480,000 people in the United States will die from smoking-related illnesses this year, now thanks to the FDA’s whitewash of the evidence, that number WILL remain the same.

ATTN: TO FIND OUT WHAT YOU CAN DO TO HELP: CLICK HERE AND HERE