Joyetech has just announced the release of its latest tank system, and its name is the Ultimo Atomizer.  Taking advantage of several innovations and recent inventions by the company, the Ultimo may actually be a tank system that many of us can appreciate.

Joyetech has a long history of bringing high quality products to vapers, aiming at new vapers with the recently introduced eGo AIO kits, at more advanced vapers with everything from the eVic VTwo to the Cuboid 150, and more tanks than you can shake a stick at.  In the past, Joyetech has made sure that they offer products at the lowest possible price to appeal to the widest audience and it looks as though the Ultimo will be a valued addition to the family and keep the tradition going. 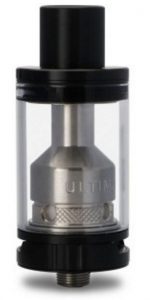 At 55mm from the base of the 510 to the top of the tip and just 22mm across, the Ultimo from Joyetech is surprisingly small for its stature.  Made from Stainless Steel and Pyrex, the tank is available in its natural metal finish or black.  Minimalistic is the single word we could use to describe the outward appearance of the Ultimo, as every surface has been reduced to the smallest area possible to create the illusion that less is actually more.

Looks, however, can be deceiving.  The Ultimo tank has a maximum capacity of 4ml of e-liquid, making this a mid-size tank in the body of a mini.  The central assembly acts as a clamp to hold everything in place, each part carefully crafted as Joyetech has paid close attention to every detail to ensure functionality, fit, and form.

As you can see below, each individual component comes together as an integral part of this design.  The removable mouth piece gives way to the extension for removing the top cap.  Massive dual filling ports ensure that the top filling experience on this tank is simple and easy.  The base of the tank has a sunken area for airflow, and a fully adjustable ring around the outside.  As we stated earlier, Joyetech wanted to make sure that no space or material was put into the Ultimo that wasn’t necessary, and they have come up with some ingenious solutions to get around the bulkiness of other systems.  Using the coil system to seal off the base of the tank and bring air directly through its center is the last piece in the Ultimo puzzle.

There are 3 separate coils for totally different vaping styles, and the MG heads all have a common purpose; maximum vapor production with the greatest flavor they can produce.  Joytech has created some innovative coil systems in the past, but this time they have knocked the ball out of the park.  From the outside, each coil looks similar, but when you delve into its working you will notice they are worlds apart. 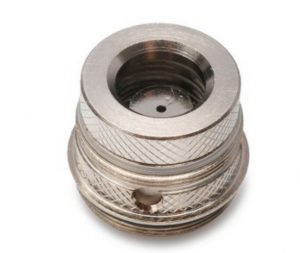 Last but not least on the list, Joyetech will also be offering a single coil MG RTA section for anyone who wishes to install their own creations, or spare Notch into the system.  This is one that I am excited about – slightly.

Joyetech Ultimo Atomizer: GET IT HERE