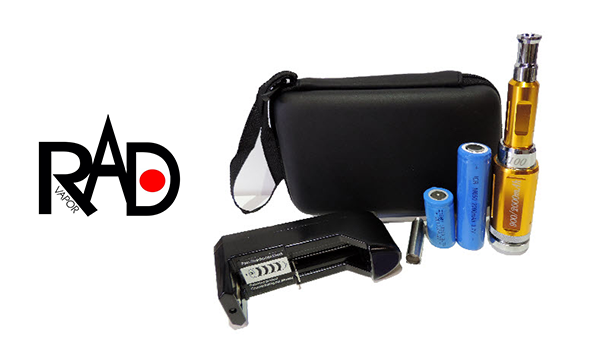 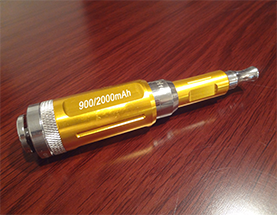 Starting from the top, the Kamry H100 I received has a polished metal drip tip that sits on an outdated looking skinny clearomizer. I believe the clearomizer is used more as a place holder since there are many other better performing and popular clearomizers on the market right now. A removable gold cover piece wraps around the clearomizer to add more appealing looks; this begins the H100’s creative design. With the cover that came with the H100, it screws down to an eGo connector inside the drip well of the device. Though the cover can be used as a drip shield for running a standard disposable atomizer, it is likely to fail since the cover isn’t stationary to an atomizer. If it did fail, there is still a deep drip well for a backup.

Anyhow, on the top of the device sits a 510 eGo connector that is surrounded by a very deep drip well. I like the fact that the drip well is deep, but it’s also very skinny, and just big enough for a clearomizer. It wasn’t designed to be a drip well anyways, but more of a head that will accept 510 eGo clearomizers and various eGo tanks. In addition, there are 3 air inlet holes on the outside of the well. Since the H100 is a telescopic mod (meaning you can adjust the device to different battery sizes), the upper polished part of the body tube has a vent hole. Unfortunately, if the device isn’t adjusted to its full length, that vent hole is covered up by the gold bottom tube. A little bit of a design flaw I suppose. 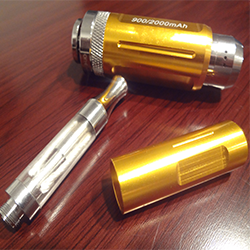 The next piece is the bottom gold body tube. This piece supplies the majority of the H100’s unique looks. It starts with a bevel at the top, then flat etched areas and etched lines going the length of the tube. It definitely looks very nice and since owning it, it’s been a pleasure to show off. Just below sits the bottom cap and fire button for the device. The H100 is mechanical, so it uses a bottom button that is spring-loaded.

The H100 looks quite awesome and if I were to receive this a year ago, I would have glorified it if being used with a Kicked setup. But, times change and people change and for me personally, I’m not as concerned with show-off devices as I once was. These days, I make quality my first priority, and just by the looks of the H100, good looks are there, but it seems to lack in that quality appearance.

One common feature I’ve already mentioned on the H100 is the deep drip well that is compatible with accessories that use the eGo connector. On the outside body of the drip well are three air holes to allow those tight fit clearomizers ample airflow. It also features a locking bottom button design, which works perfectly. The locking button is a must for mechanical mods. The biggest selling point for this device is the good looks and its telescopic ability. You’re able to use an 18350 (99mm/ 3.9 inches tall), 18500 (113mm/ 4.4 inches tall), and an 18650 (129mm/ 5.0 inches tall) with this device. The base unit without the upper tube attached is 64mm/ 2.5 inches and the width is 25.5mm/ 1 inch. 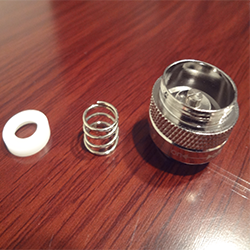 The H100 performs well, but seating the battery in the body is where my problem is. It uses a bottom spring with a plastic piece that just flops around. Both the plastic piece and the spring arrived not in a stable position, which lead me to believe the manufacturer just through the mod together without care of the consumer. Understand that when you purchase a cheap mechanical mod, there will be faults. This is where you have to compare price versus the devices faults.

Although the drip well is a tight fit when using eGo styled clearomizers, the airflow continues to perform well due to the 3 small air holes leading to the well. Surprisingly, even with the floppy parts inside the H100, the button still seems to perform great. In fact, it feels better than my spring-loaded Nemesis button when being pressed – there is a soft and smooth feel to it. The threads to telescope the device are pretty smooth, but you can tell the metal is soft and cheap. For me, it just doesn’t offer that stainless steel quality feeling that you would hope for in a device. I was able to get a solid connection when firing clearomizers on this device, so at least there’s another plus to look for. The clearomizer that came with the H100 is more of a cheap placement clearomizer. If the manufacturer wanted to produce great results from this device with a clearomizer, they should have made a more popular and proven clearomizer the default, like an Aspire or EVOD. That said, I used my Aspire with this device.