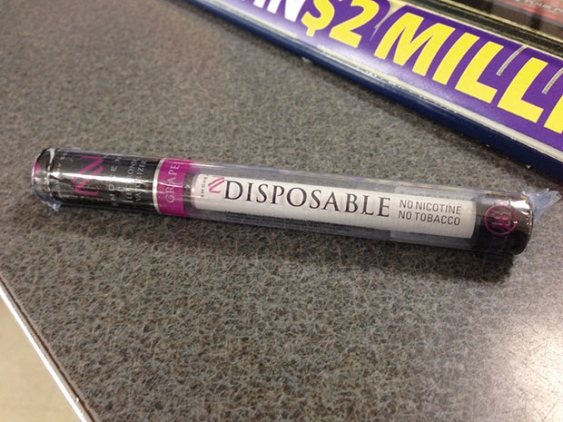 The Vancouver Sun recently reported that a Canadian mall kiosk sold an electronic cigarette to a 11-year-old boy.

The boy was sold an electronic cigarette that didn’t contain any nicotine in the blueberry flavored e-liquid. However, the boy’s father, Joe Braico, was left ‘shocked’ and ‘angry’ that the kiosk would sell to a child.

One of his friends had bought one there earlier in the week, he thought it was pretty cool and he wanted one for himself.

Braico also added that his son had thought the e-cigarette “was just like candy.”

Just like candy? – Does that mean the boy also walks around drinking one of Smirnoff’s latest candy apple malt liquors or maybe the adult industries candy flavored editable undies, just because it tastes like candy? – The boy should know right from wrong, and I believe the candy part is more of the boy coming up with an excuse for what he’s done to avoid a spanking from the father.

Other than the kid knowing right from wrong, it really isn’t his fault. We all know that kids will be kids and that they will try their best to defy the rules set. Where the problem rests is with the Canadian kiosk owner who sold the 11-year-old boy the device.

It was Jasper Lee that sold the boy a blueberry-flavored electronic cigarette. Lee said because the device doesn’t contain nicotine he sees no problem selling it to anyone who wants to buy one. It is not illegal to sell electronic cigarettes to minors, and Lee said his store is not the only one to do so.

Every store is the same, it’s not just me. – Jasper Lee

Paul Bergen, a consultant with the Electronic Cigarette Trade Association of Canada (ECTA) spoke on the case saying:

The Tsawwassen case is an anomaly and “does not represent e-cigarette retailers or suppliers. Though e-cigarettes are still largely unregulated, e-cigarette associations and retailers have typically refused to sell to minors. Even though the product is relatively safe, unlike cigarettes, the same general guidelines are in place as far as dealing with customers.