Since the arrival of Evolv’s first variable wattage chip-set, the DNA boards have been in the forefront of vaping technology.  The evolution over the last 5 years, from a simple 12 Watt board to the temperature controlled, adjustable wattage DNA200 with E-Scribe technology, this American based company has always been at the fore-front of the leaps in vapor technology.

Their patented power regulation technology may be seen to some as expensive, especially now that we have other companies who can produce similar beasts at a fraction of the price, but the truth is without their innovation most vapers would still be sucking on tube mods with variable voltage.  When the DNA200 board hit the market, the hype around it was amazing; then it was considered the peak in innovation.  200 Watts, temperature control, innovative Temperature Co-efficient of Resistance TCR settings, and firmware that was tweekable in every fashion had the crowds excited.  We are now excited to announce that it is time for the DNA200 to step aside, because it has a replacement and its name is The DNA250.

The first thing we would like to point out is the fact that many of the basic features that we have come to expect from the DNA200 are also present in the new board. Temperature control features are the same, TCR functionality is as extensive as it’s older brother using the same programming from within the E-Scribe application. 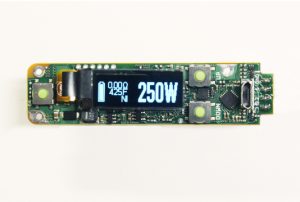 Evolv has done everything that they can to make sure that the transition from the DNA200 to the DNA 250 will be as simple and seamless as possible to the point where the new board will fit into the foot-print of the old one.  In layman’s terms, if you have a DNA200 device you will be able to switch out the old board for the new one, although some of the new features will be wasted.

Here’s where it gets interesting.  The DNA 250 operates normally using a triple cell set-up, 3x 18650’s, but it will also run up to 160 Watts using 2.  Devices are already being made for this 2/3 battery set-up and this new board will happily work with them. 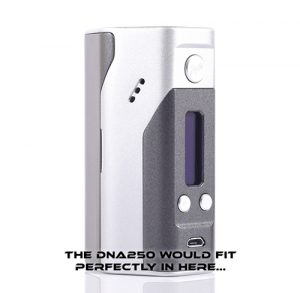 The E-Scribe software will enable you to adjust almost everything that the board can do, when the DNA200 was first released it was deemed as the “technotroll’s wet dream” as they were given the option to control everything.  The DNA250 gives you the same power over your device, it just gives you more power to play with.

Most people won’t use the full potential of this board… there is no doubting that, but added power comes with added protection for the chip-set.  By designing a device that can push higher wattage and higher temperatures, Evolv has had to make sure that the board can handle it.  For those of us that rarely push their mods over 100 Watts this simply means that the board will perform at peak efficiency for longer.

If you have a DNA200 device laying around, taking advantage of the DNA 250 may be as simple as pulling one board and inserting a new one.