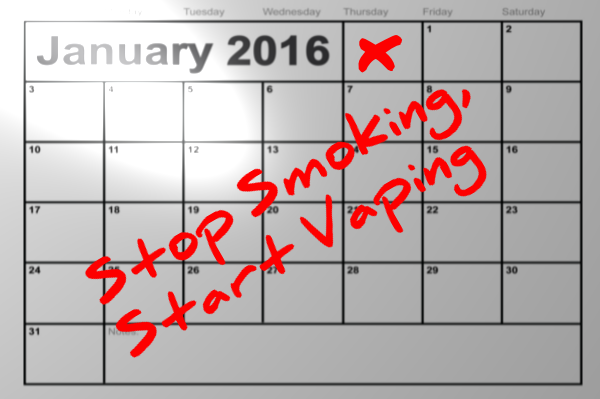 Every New Year, people bring out their list of resolutions.  A main stay for generations has been to quit smoking and this year I offer a solution.  Ignore the lies and start vaping.  If you live in the United States, chances are you have been inundated with studies and media reports telling you just how bad vaping, or the use of electronic cigarettes, really is.  I’m going to take the next few minutes to give you a few facts that can help you make an informed decision on whether vaping is right for you, or a loved one, thinking about getting away from the little white sticks for good.  While the government may be unwilling to accept the millions of ex-smokers world-wide who quit due to vaping, passing them off as mere anecdotes, the evidence is out there.  If your goal for the New Year is to improve your lung health, get informed and take the leap.

On January 1st, many people will use various methods to quit, prescriptions drugs, over the counter solutions and even cold turkey,  anything to get away from the addiction to cigarettes.  Unfortunately, the number who fail will undoubtedly be as high as years gone by.  If those people pay attention to the media onslaught of the vaping industry, they are highly likely to stay away from these products.  Over 50% of the American public believe that these products are as dangerous, if not more dangerous than traditional tobacco.  While the British Prime Minister just this week came out in favor of Electronic Nicotine Delivery Systems as a viable solution to the smoking pandemic that has enveloped the globe for over a century and Public Health England reported, after an extensive 5 year study, that “vaping is 95-99.9% safer than smoking” we are still being bombarded with disinformation.  That same British memorandum also stated that those who are fighting against vaping are actually working to the detriment of the public health that they claim to champion.  The British Government are responsible for the health care costs of its citizens and has no reason to be disingenuous about the benefits or risks of vaping.   Many of the groups and entities creating the anti-vape studies are having their integrity and motivation called into question.   Even the most ardent tobacco control advocates will secede to the notion that the electronic devices are much safer than the traditional nicotine delivery system, but for many in the general public the damage has already been done.  Many people who were using electronic nicotine delivery systems returned to smoking because of irresponsible rhetoric and the belief that they were doing more harm to their bodies.

The Age Of Knowledge

We live in a time where information is as easily obtainable as a glass of water from the faucet in the kitchen.  A 2 second search on Google can bring up any information we require.  That search can take us back to the original tobacco harm reduction argument: type Michael Russell 1976 into Google, just to prove the point.  He stated that people smoke for nicotine but are killed by tar, and gave the argument that by lowering nicotine levels in cigarettes it would reduce people’s desire to smoke.  What many people do not realize is that nicotine is no more addictive, or dangerous than caffeine.  As a stand alone chemical, it poses no more risk in small quantities than a coffee.  For some obscure reason, over the years the message has become a little skewed.  The very people in the United Sates who should be heralding the vaping industry as the solution to a difficult problem are actually  the ones fighting hardest against it.  The anti-smoking movement morphed into the anti-nicotine movement and they will not be happy until everyone does as they are told and quits.  It will take you 2 seconds to find out that the majority of business owners in the vaping industry ( not to be confused with the cigalike industry) from the e-liquid manufacturers to the makers of the devices used are vehemently anti-tobacco, yet to the outside world they are continuously lumped in with “Big Tobacco”.  These are the people who are now truly championing  tobacco harm reduction while others who claim to do so are fighting a different fight.  If you want to know how many people have actually been helped by vaping, use the tools at your disposal to become enlightened.  There are numerous groups on social media filled with many thousands of people who have either quit or seriously reduced their cigarette intake by vaping, so rather than just taking the first headline you see at face value, take the time to talk to those who are in a position to give you a true account, not those sitting in a government office who think that they know  what is best.

The British Government are encouraging smokers to turn to vaping as a way to get away from cigarettes and the American government are in the process of destroying the industry.  Every where you look, local governments are in the process of implementing bans and treating vaping as though it is no different from smoking.  They are placing sin taxes on devices that have the potential to save lives, to discourage people from using them.  They are implementing usage bans, even though unlike tobacco products there is absolutely no “second-hand exposure”.  The onerous regulations that are being proposed across the country are laughable at best.  Electronic Nicotine Delivery Systems contain absolutely no tobacco.  They may in some cases contain an ingredient that is derived from the tobacco plant, nicotine, but imagine if they were to turn around and say that each time you purchased milk you would be charged and taxed for the whole cow.  The FDA is currently in the process of bringing up regulations that do just that, in their infinite wisdom they  are putting forward the notion that everything used to vape will be deemed a tobacco product.  Not only the e-liquid contained in these devices, that may or may not contain nicotine, but also the batteries, cotton, wire  and all other components.  They are planning to “regulate” the entire industry out of existence by requiring anything that didn’t exist in 2007 to go through a rigorous legislative process that would cost millions of dollars per component.  When you consider the small businesses that produce in some cases hundreds of items, these costs will kill the industry over night.  The truth is, these products have been on the market for almost 10 years as a consumer driven product without the need for government oversight, doing their jobs perfectly well.  The same politicians and agencies allow you to buy gum and patches over the counter with out the need for prescriptions as they believe they will help you to quit smoking.  They contain the exact same nicotine extract as vaping devices, but as they were on the market before the 2007 grand father date they are safe from regulation.  These notions are not only deterring smokers from trying vaping, but are in truth going to hand the industry to the tobacco giants that everyone was trying to escape in the first place.

Irresponsible claims made by politicians and health “advocates” about the negative impacts of vaping are nothing short of dangerous.  By stating that the ingredients are “unknown” or that children will vape and move on to smoking are as easy to discredit as a simple google search.  The Public Health England report I mentioned earlier, as well as a recent CDC publication show that while many teens are experimenting, those who use the devices regularly were in fact smoking to start with.  If politicians want to know the ingredients, all they have to do is look them up, one of which is used in inhalers to deliver asthma medication.  The greatest of all claims made by politicians is we must save the future generations from  picking up cigarettes, when in fact they those same politicians are up to their eyeballs in money from the Master Settlements Agreements and really don’t want people to quit at all.  Each person who successfully quits smoking is one less person putting funds into the coffers.  Each of the states currently fighting hardest to treat vaping as tobacco are the ones who benefited the most financially from the tobacco companies in the past.  Their true motivation is to have it labelled as tobacco so they can tax it as tobacco.  Health advocacy groups who are fighting hard against vaping are funded by the same money pile.  If the cash flow dries up many of these people will be out of work, they are in the industry of fighting for public health not finding solutions to improve it.

Do Yourself A Favor

As the New Year comes around and you are thinking about quitting smoking, sit down and do some research.  There is plenty of information out there to make an informed decision based on fact.  Although the manufacturers of these products are prohibited from saying it, vaping is a viable and effective means of getting away from cigarettes for good.  Before we part ways today, I would like you to bear one thing in mind.  If the government were serious about protecting your health, they would have outlawed cigarettes a long time ago.  The fact that they are fighting so hard on so many fronts to make it disappear told me that vaping was something they feared.  They fear it because it works, and if you want the best chance of curbing your addiction this year give vaping a chance.