Sex sells and so does vapor, but when you combine the two, there’s a nostalgic love for vaping.  Maybe it’s the soft sensual curves of an hour-glass body, the eloquent bosom frontal view or maybe it’s the seductive exhale of vapor that somehow sparks arousal.  Whatever the case may be, it’s evident that vape companies marketing tactics are gravitating to this age-old strategy.

There are many advertising campaigns within the electronic cigarette industry that take advantage of sex being a hit for sells and promotion.  In the earlier days of the industry, booths held at vaping meets and conventions were filled with banners and products, but today booths are filled with elaborate displays, products and half-dressed women flaunting parts you would normally only get to see on sandy beaches and the bra and panty section in the latest sears sales paper (oops?). 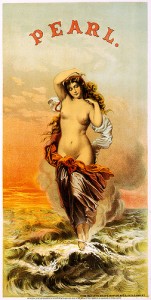 The truth is, sex has been used for years in the marketing and advertising field.  The word “sex sells” is where sex appeal is used in advertising to help sell a particular product or service.  Not all of the sexual advertising or marketing involves sexual imagery related to the product or service in question, so there could literally be a flower and a revealing image next to it just to grab your attention or gain even the slightest interest.  The sex appeal used in advertising techniques can be very extreme or very subtle.  There are many details that go into creating a sexual appealing ad, but what we’ve seen within the electronic cigarette industry thus far is half-dressed women.

The sex appeal being used in advertising dates back to 1871, which were woodcuts and illustrations of attractive women (most times unclothed from the waist up) on various signage, such as posters, signs, and ads for old saloons and tobacco products.  In 1871 the Pearl Tobacco brand first used sex in advertising, which featured a naked maiden on the package cover.  Duke & Sons went as far as inserting trading cards into cigarette packs that featured sexually provocative starlets in 1885, gaining them substantial growth and went on to become the leading cigarette brand by 1890.

The electronic cigarette industry has adopted the appealing sexual imagery into its advertising, and it really first became publicly widespread when blu eCigs ran an ad in the Sports Illustrated swimsuit edition, which displayed the bottom portion of a woman in a bikini that had the company name printed and included the tagline “Slim. Charged. Ready to go.”  You don’t see the model’s face, just her frame with a pierced belly button. 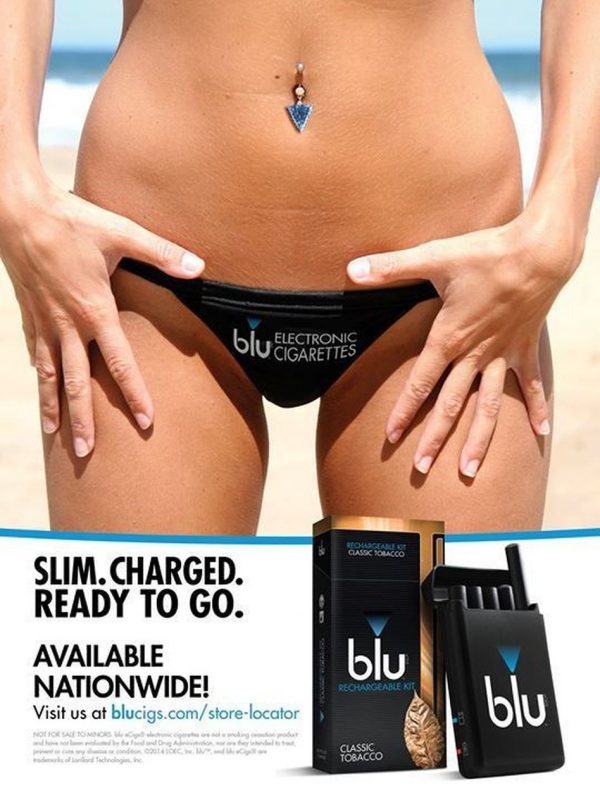 I leave you with this quote from Kurt Landversicht, a highly recognized name within the electronic cigarette industry, known for working with a large number of the leading companies, as well as being an expert when it comes to advertising and market strategies.

Being in the advertising industry for almost two decades now, I have heard the saying over and over from brands, clients and consumers alike, sex sells. The natural reaction as human beings is to be drawn to products which we visually and emotionally connect with. The ability to use sex as a tool to attract customers is a powerful one which touches both key elements for almost all potential customers. I have often had clients from the auto, boat and motorcycle industries use steamy image art for their advertising campaigns and to some success. It does not surprise me at all to see the same tactics beginning to creep in to the Ecig industry as well. One of the best performing Ecig ad campaigns I have managed was a couple of years ago for the Playboy Ecig brand. The ad banner as you can imagine included a model wearing the famous bunny suite. This campaign had a way above average click-through rate for the digital campaign which drove a large amount of traffic to the client’s e-commerce website. I believe that as a seasoned professional in the advertising and marketing industry that sex is a viable tool when used tastefully. The Ecig business is an adult targeted industry where advertising strives to reach the intended target audience. How far brands, agencies and publishers push the boundaries of the images and messages they use strongly depends upon the consumer reaction and feedback.