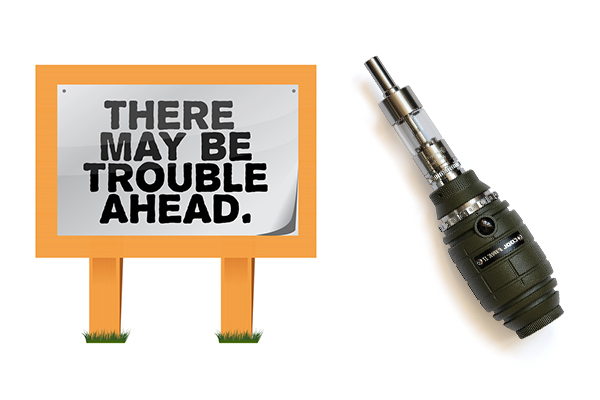 Once upon a time, more specifically the earlier years of the vaping industry, it was cool, happening and great for our market to see devices that carried interesting designs that resembled some of the world’s most recognized weaponry.  These interesting and highly unique devices brought a plethora of discussions for vapers all over the world, a fantastic addition to a collection, as well as a way to increase the attention to the vaping market.  Unfortunately, the kind of attention these devices are gaining isn’t quite the attention we’re looking for.

The days of mods carrying similarities to assault rifles, grenades and other weaponry should come to an immediate stop.  Though these mods have the ability to capture our other interests, if they continue on the same path, they could potentially become our demise.  The electronic cigarette industry has endured what feels like a lifetime of scrutiny, and while the industry as a whole rests under the microscope, it is in our best interest to not make unwanted waves just to please vaping consumers with looks. 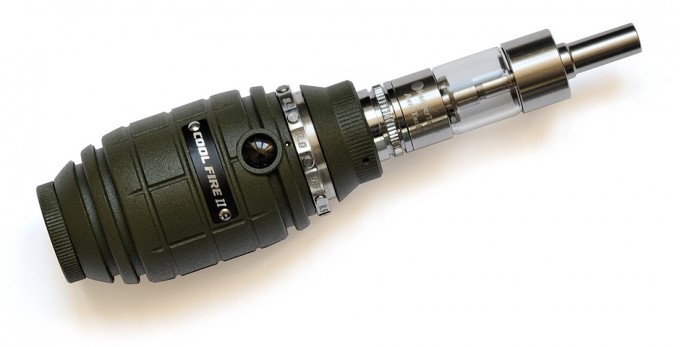 Almost this same time a year ago, this topic became an ongoing popular discussion as the Transportation Security Administration (TSA) expressed via Twitter that after discovering a grenade-shaped vaping device (Innokin CoolFire 2) in a carry-on bag at the Salt Lake City International Airport, that those type of vaping devices weren’t permitted.  Furthermore, the agency included via an Instagram status update that when items are discovered, they can cause significant delays while explosives detection professionals resolve the alarm.  This statement can be applied everywhere for that matter, as the devices appearance can cause an uproar with the public, making people feel unsafe due to the devices heavy resemblance to weapons.

Unfortunately, these devices have the potential to create unessacary issues and will result in a negative spotlight on an industry that is already being dissected heavily by those who are against the vaping craze.  And, for that reason, we shouldn’t continue to support the manufacturing of devices that carry such an appearance. 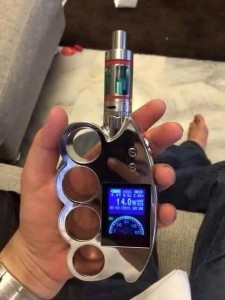 The most recent device released that has the shape or similarities to that of a weapon is a device that looks like brass knuckles, which is considered a weapon.  Also using the terms knuckles, knucklebusters and knuckledusters, this weapon is known for being used in hand-to-hand combat.  They date back all the way to the ancient times and have been used all over the world, however, they are illegal in many country’s.  The United States aren’t significantly regulating them on a federal level, but there are many state, county and city laws that prohibit the purchase and/or possession of them.  This is why such a device should not be manufactured for vaping consumers, as it can stir the pot over something that, in reality, is harmless.  By not purchasing such a device, you’re avoiding potential negative attention on an industry that is helping so many.  It’s not hurting you, so please, do not hurt it.

The second device I’ll be sharing with you today is quite an interesting one.  In fact, it was so interesting that it caused an uproar amongst the vaping community.  This device wasn’t made by a manufacturer, but is more so a mod made by a vaper.  What most are wondering is why would someone even make such a device.  While some believe the mod-maker is just stupid, others believe the person has a death wish.  And, in this day and age, they are very likely to have their wish fulfilled. 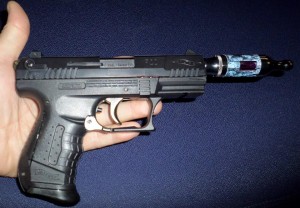 The news is plastered with shootings of all types – people are crazy, and will kill you in a heartbeat if they feel threatened.  While this mod-maker may have found their work appealing, many may not feel quite the same way.  There are even police officers now being closely watched because the public feels they have a happy trigger finger, and walking down the street with a gun-turned-vaporizer will certainly set them off and continue to smear their name.  The truth is, weapons are dangerous and with how crazy the world has become, the public feels worried for their safety.  This type of device will not help that case.

Indeed, just because these type of devices are owned by some vapers, doesn’t mean they’ll go out in the public flauting their new weapon’d-out vaporizer, but at the same time we don’t want to encourage the making of these devices.  Vapers have the tendency to share and boast with pictures of their fancy devices all over social media, and all it takes is one of those pictures of a gun-turned-vaporizer to fall in the hands of those who are against us.  You’re merely giving them ammo to fire away at us, and if nothing else will kill us, that will.