August 8th 2016 is a date that will go down in history as one of the largest mistakes every made by the American Government when it comes to the health and well-being of 1 out of every six of its citizens (the number of people who still smoke).  On this day, the vapor products that the government previously attempted to regulate as pharmaceutical medical devices(and failed) were officially put into the same basket as the cigarettes they were developed to replace.

By adding electronic cigarettes, advanced personal vaporizers or Electronic Nicotine Delivery Systems (ENDS) to its Tobacco control rostrum the FDA has essentially destroyed a blossoming multi-billion dollar industry with the stroke of a pen.  The anti-vaping/anti smoking groups would have you believe that all of this is in order to protect children (which according to the CDC includes individuals up to the age of 26) from the harms associated with burning Tobacco, when in fact these products are as close to cigarettes as water is to vodka.

In its ultimate wisdom, the FDA decided to ignore any evidence presented in the last 2 years, much of which flies in the face of the information they based these regulations on.  Regulations that were out-dated when they were written in 2014 and in the 2 years since they were created by bitter members of the Pharmaceutical industry (at least in part) studies from around the world, especially the United Kingdom, show that regulating vaping as Tobacco is probably the most counter-productive thing anyone can do. 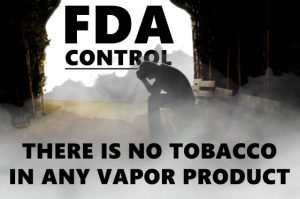 Yesterday, a smoker walking into a vape shop for the first time could be told that vaping is 95% less harmful than smoking cigarettes, a fact backed up by the Royal College Of Physicians, that vaping helps people quit smoking, a fact backed up by a European Union study over the course of 4 years.  They could also have the vape shop put together their device, show them how to use it and help them pick their best approach for Tobacco harm reduction.  As of this morning, it is illegal for anyone employed by a vape shop to do any of these things.  It’s illegal to state facts that do not fall into the FDA’s modified risk analysis of products, unless of course a manufacturer wants to spend millions of dollars and the next 3 years performing studies that show how vaping benefits the population as a whole. 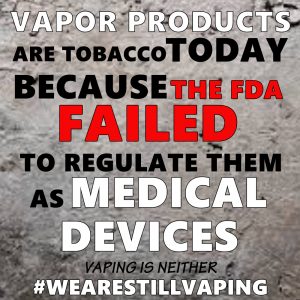 If a customer walks in and is unable to put their equipment together or has technical issue with their device, unless the retail outlet is registered as a Tobacco manufacturer the customer is out of luck.  The shops are not allowed to touch any part of a device that is out of the packaging and some of their customers are unable to perform the tasks required.  These devices are not cigarettes, they are electrical marvels of modern ingenuity that are a lot more complicated than setting a smoke on fire, but the Government has proven it doesn’t care.  The number of stories you hear about batteries exploding in devices is about to rise because no one in the industry can legally show customers how to use them safely.

This is just the tip of the iceberg though, within 2 years almost all of the products that are on the market will be gone because the FDA have put together a regulatory process that is prohibitive to all but a couple of the thousands of companies currently producing these devices and the liquid that goes in them.

They couldn’t give the vaping industry to their friends in the Pharmaceutical industry, so they handed it to their friends who make cigarettes instead.  Will any of this stop children(up to the age of 26) starting to smoke, probably not, but it will make sure that the billions of dollars in revenue that the Government and it’s cronies have lost will start to be replenished.