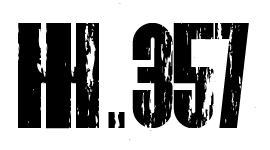 Something that has gotten a bit of buzz over the last few months is the $22 dollar atomizer known as the HH .357, made from the legendary Cisco spec atomizer internals, and meticulously assembled by a guy named Hanna. Many people use Cisco spec atomizers, myself included and I swear by them, to me nothing else compares and I ask myself, how much better can this get? So when I heard about the HH .357 I was very interested, but at the time had no idea how much this unicorn of an atomizer was going to cost. Once the atomizer was released on AvidVaper I immediately went to the site to procure myself one, only to be stopped in my tracks. In no way shape or from on principal could I pay $22 dollars for a single atomizer, something that in hindsight is disposable, at this point I just shrugged it off and went on about my vapey ways. Fast forward a few weeks I got a chance to use the HH .357 down in NYC at a mini meet, and met the man that puts these atomizers together, let me tell you, after talking with him and Cisco I do have a great appreciation for how these atomizers are put together, the thought process behind doing it and the amount of time Hanna takes to put these atomizers together and test every one of them to make sure it is working up to his standards. After using the HH .357 quite a bit I was impressed, the heat and vapor production is insane, and the draw for me is perfect, one of the smoothest draws ever. (See: Vaping is subjective and this is my opinion) Even after using this atomizer I was still not ready to drop the money on one. Well last week at another NYC mini meet, I asked Cisco if he had any HH .357′s on him and ended up buying two of them, a 510 and a 901. I have been using the HH .357 for 5 days now, after a couple days it started to feel on par with Hannas seasoned HH .357 that I got to use a few months back. After using this atomizer for close to a week I feel that I finally have a good handle on this atomizer, what works and what doesn’t and gauging whether or not I feel that performance of this atomizer versus the Cisco’s that I have been using for months justifies the high price tag. In my opinion, I will not be buying another one. I was quite concerned that once using the HH .357 that going back to my other atomizers was going to feel unsatisfying, but I have been able to pick up a device without an HH .357 on it and still get a vape that leaves me satisfied without all the hassle. Some of you may be upset to read this as I know many people personally that love this atomizer and it’s the only one they use, but for me, the performance while great and without a doubt better then your run of the mill atomizer is not so far off in superiority to my atomizer of choice. Also to be quite honest, the HH .357 is a bit of a queen, more then 3-4 drops will cause it to spit, it needs to be blown out from the connector, and given a bath weekly (See: Cleaning atomizers with PGA/Vodka) Its also a bit fragile, I have had the tube come off the bottom post a little bit from being in my pocket. At the end of the day its an atomizer, something that is meant to be disposable. Last minute addition, I know many may point out the longevity of these atomizers as the selling point, people have had them for months with consistent performance, I think a lot of this has to do with the cleaning and care ritual people follow using this atomizer, a ritual most don’t follow with their run of the mill $6-8 dollar atty, I have normal everyday atomizers that I clean regularly, a few that are over two months old and still working just as good as they day I got them.

Pro Tip: Try your HH .357 without a drip shield, they are assembled and tested without the use of one and a dripshield will obscure the airflow going into the atomizer, while it will still perform great with one, it will perform even better without one.  Though I have been informed that the drip shields Cisco sells on AvidVaper have additional air holes and do not mess with the airflow.

If your interested in this Atomizer please check out: http://www.avidvaper.com/hh-357-cisco-spec-hybrid-atomizers/